The online sensation of star children 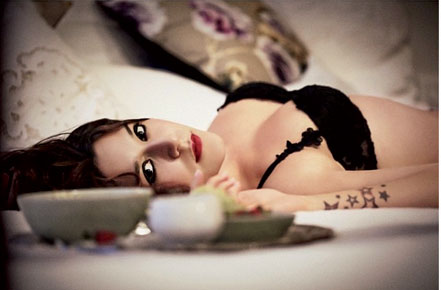 She’s only 12 years old, a school student in Delhi, and Sonam Tiwari is already throwing teenage tantrums. But it’s not a new phone, a holiday abroad, a new bike or a new dress that she is after. No, her IIM-educated professional parents have already given her all these. Now she wants something that they had never thought their 5-ft 2-in painfully thin daughter would ever ask for—a nose just like Sridevi’s 14-year-old daughter Khushi Kapoor. “We still aren’t sure how to react to her request. No parent ever expects their child to ask for cosmetic surgery. Honestly, till she brought it up, we didn’t even know who Khushi Kapoor was,” says her mother, Geet Tiwari.

So who is Khushi Kapoor? She’s definitely not ‘just another Bollywood star’s kid’. With 38,000 followers on Instagram and 2,000 followers on Twitter, Khushi, much like her older sister Jhanvi, is now a star in her own right. The photos she puts up of her father Boney Kapoor, of herself kissing singer Jack Gilinsky on the cheek and standing next to Ed Sheeran, of her travels and even selfies of her hands and legs go viral instantly, each inviting close to 3,000 likes and 200 comments typically. But it’s not just her lifestyle and her star heritage that is bringing her this attention. Kids simply can’t get enough of her looks. “She used to be this really chubby sidelined kid. I remember seeing her on a magazine cover with her mother and sister, and she looked like a real ugly duckling. Then she suddenly had a dramatic makeover and became so seriously hot. Just look at her selfies now—so much confidence and self-assurance. No wonder young people love her. She’s now got the looks that one can aspire for,” says Neeti Srivastava, 22, a member of Jhanvi Kapoor fan club. Interestingly, Jhanvi only has a paltry 1,162 ‘likes’ on Instagram and 1,491 followers on Twitter. But she does have her own fan club. “I think people have always been used to Jhanvi being thin and pretty. But somehow it’s Khushi’s transformation that has really got everyone talking. The ugly duckling really did turn into a swan,” adds Srivastava.

And talk, they do. Every since Khushi revealed her new avatar, the press and her followers haven’t stopped circulating rumours of her having undertaken cosmetic surgery. These have become so strong that cosmetic surgeons as far away as Dubai have received requests from young girls who want their nose or their smile or even their eyes to look ‘just like Khushi’. “Kids today are much more conscious of their looks and cosmetic surgery prices have been falling like crazy because of excess demand. Why not achieve perfection when it’s available? Earlier requests used to come in for body parts like [those of] Bollywood actors, and now it’s their children that people aspire for,” observes Dr Sohan, a laser surgeon from Delhi, adding that this switch in popularity has been all thanks to social media. “Earlier you’d need to land a film or at least a TV commercial for people to fall in love with your looks. Now all you need to do is take the perfect selfie and be social media savvy.”

“What sort of role models are we giving our young children today? If the body is the only way to look good and feel good about yourself, then it is little wonder that kids face so much pressure in their teenage years. A constant need to click 500 selfies of yourself does make young people insecure and low on self-esteem,” says Malavika Kapur, a noted child psychologist from Bengaluru and a honorary professor at the National Institute of Advanced Studies.

Easy or not, it isn’t stopping star children, and even star nephews and nieces, from claiming their share of the limelight online. Ahaan Panday, Chunky Panday’s teenage nephew, has 22,000 followers on Instagram and has received 560,000 ‘likes’ on ask.fm. Another widely admired account is that of Ibrahim Ali Khan, Saif Ali Khan’s 15-year-old son, has over 25,000 followers on his Instagram page. He posts frequent selfies (sometimes topless) and photos of himself chilling with friends and hanging out with his famous grandmother, aunt and step-mother (Sharmila Tagore, Soha Ali Khan and Kareena Kapoor). But it is the photos with Khushi Kapoor, Jhanvi Kapoor and Navya Naveli Nanda (Amitabh Bachchan’s 17-year-old granddaughter who has 57,000 people on her Facebook page and 6,000 followers on Twitter) that bring him the most publicity. “I was heartbroken for days when I saw the photos with the other girls. For the last year, I have wanted to marry him. I am such a huge fan of his. He is so much more classy and gorgeous than his father. I think I would just go into depression if he doesn’t go into films. He was made for the screen,” gushes Maria Thomas, 15, one of his followers from Kerala. Another fan, 14-year-old Sia Manchandani, from Dubai emails saying, ‘He should never have a girlfriend. Such a handsome person deserves to belong to the world.’ Manchandani prints out every photo that Ibrahim posts and diligently pastes them in a scrapbook so that she can ‘look at it whenever she wants.’ And if there is a gap in his posts, she feels ‘so depressed that I don’t even want to go to school that day.’

If the girls ‘are in love’ with the male star kids, for the boys, the Kapoor sisters, Navya Nanda, Shanaya Kapoor (Sanjay Kapoor’s 15-year-old daughter), Krishna Shroff (Jackie Shroff’s daughter who has 70,000 followers on Facebook) and Aaliyah Kashyap (Anurag Kashyap’s 14-year-old daughter who has 160,000 ‘likes’ on ask.fm and 19,000 followers on Instagram) are pure eye candy. ‘When I see Aaliyah’s legs I can barely go to sleep at night. I also was in love with Krishna Shroff’s topless photos. But Aaliyah is my dream girl. There is something in her pose, her grace, her eyes, her smile that can drive a girl completely crazy. She is just so pure looking,’ emails one fan, 18-year-old Mikey K from Puducherry. She is ‘so pure looking’ that Mikey claims he dumped two girlfriends just because they couldn’t ‘match upto Aaliyah’s looks’. Interestingly, it’s not like the girls aren’t aware of their online sex appeal. ‘Sexy’, ‘hot’, ‘boobs’, ‘cutie’, ‘fuck’ and ‘hottie’ are some of the most common terms that appear in the comments left on their photos. Some, such as bikini shots, images of thighs, derrière pictures in tight dresses, cleavage flashes in selfies and other kind of party photographs tend to inspire even more vulgar comments. Dhiraj Gupta, a 16-year-old student from Patna, says that his entire class passes around photos of some celeb kids in a leopard-print bikini via email, but he only likes to look at “the sweet photos”. “I think they are all very innocent and cute. When they post skin waale photos, I simply don’t look at them. For me, it’s the lifestyle and their travel that is so interesting,” he says.

Of course, not all comments involve flattery. When Vidie Mukherjea, Indrani and Peter Mukherjea’s daughter, posted selfies during the alleged murder case against her mother several trolls turned on her. “She should be with her mother. I lost all respect for her,” says Srivastava, who had contemplated starting a Vidhie Mukherjea fan club but lost interest after seeing her posts.

Such is the popularity of Bollywood’s teenage offspring that a select few don’t even need to be on social media to gather a colossal fan following. Aryan Khan, Shah Rukh Khan’s 18-year-old son, has a whopping 74,000 people who ‘subscribe’ to his unofficial fan page on Facebook. His Twitter fanclub has 3,000 followers, and on Instagram he has close to 3,000. And what do these clubs do? Why, they stalk him of course. Every post, every photo, every video and every public spotting that is available of Aryan is chronicled, edited, captioned and hashtagged on these pages. And it is here that Sonam Tiwari first got the idea of getting herself a nose ‘like Khushi Kapoor’ and her distraught mother just doesn’t know how to wean her daughter off her latest request. According to Geet, “Sonam was a huge fan of Aryan Khan. This, we knew about. And we let her have all the photos and wallpapers she wanted. Then she read somewhere that he hangs out with Khushi Kapoor and she thinks she looks just like Khushi Kapoor, except for her nose. Having a teenage crush is one thing… even I was in love with Tom Cruise at one point, but I didn’t want to make my face like Nicole Kidman’s. Social media makes these celeb kids seem like they are completely approachable for young girls. They feel like these kids— who have incidentally achieved nothing significant in their life apart from having some really well-known genes—are their friends because they let them in on their lives through selfies and posts. I know girls in Sonam’s class actually believe that Ibrahim Ali Khan reads their messages and will meet them all one day. It’s ridiculous. I don’t even know how to argue or reason with my child anymore. If I tell her she’s too young for a nose job, she turns around and tells me, ‘Well, Khushi did it’.”