Draw Yourself out over Drunch

It’s not lunch, it’s not brunch—it’s drunch. When you’re free and feel like stretching your drinks over good conversation and food for hours on end. 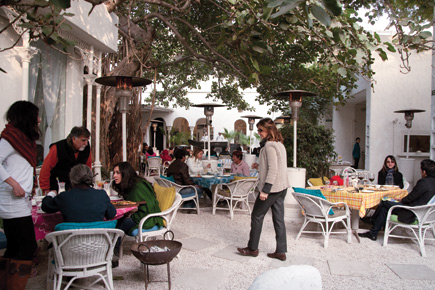 It’s drunch: When you feel like stretching your drinks over good conversation and food for hours on end.


It’s always been a long-running issue among beer drinkers—what is a good time to drink beer? One side argues a good beer is one you drink in the morning with brunch. The other insists that the former are veritable drunks looking for an excuse. From the look of things, crowds in the ‘veritable drunk’ category are on the upswing. Daytime drinking isn’t limited to Goa vacations alone, and beer isn’t all the alcohol being downed at Sunday Drunches.

Drunches, quite simply, are liquid lunches. Or liquid brunches… as long as there’s liquid, and as long as that liquid contains alcohol. Note that drunches are honourable events, especially after the good old party’s unceremonious exit from the top of the social order. They are, in fact, a sign of the conversational times we live in. And a sure sign of having arrived. If it’s mid morning, and you have a flute of Mimosa in hand, feet in casual leathers and a tablefull of wine glasses emptied of everything save orange slices, kindly raise yourself a toast of honour. You’ve done it.

The one thing you’re bound to ask, though, is ‘what’s new?’ Brunches are hardly a virginal new trend and you’d be right. And that’s precisely why Open is happy to report that this isn’t another attempt at repackaging the brunch. It’s merely an attempt to document its transformation from an in-between meal to the new party motto.

Brunches are old hat, granted. But we were all using the wrong name because we wanted to hang onto the pretence of not drinking before sundown… what were we, alcoholics?

Either way, the drunch is now proving to be the ultimate meal. It eats not just into breakfast, always into lunch and then sometimes winds up being a sun-downer just minutes short of dinner. Guests don’t wear black, the DJs don’t belt out house, it’s too bright to wear bling, and no one is throwing up in the loos or falling over chairs. But above all, a drunch is all about chilled-out conversation, hanging out with five friends instead of the 50 you saw at the party on Saturday over a drink or six. Much like brunch, it starts as early as noon and often goes on till late evening, and has guests chugging wine like tequila shots, guests who often insist on walking away with at least a bottle of wine so that the drinking could continue in the car, as hosts of a recent invitation event in Delhi discovered. Yes, there are invitation drunches, and they are fast replacing evening gatherings as a more casual/chic backdrop to fashion shows, product launches and the like.

Olive’s AD Singh puts it down to fatigue. “After years of partying at night, a lot of people greatly enjoy the change of partying during the day. It’s usually more fun and stylish,” he says, “We hold all our anniversary parties as brunches and these tend to go on from twelve till eight. These are much more memorable than any night party.”

The good news is that the drunch is not entirely under the control of the Gucci-Bottega clan. It’s also accessible to us lowly mortals who are not invited anywhere—provided we can afford to spend sums of the order of Rs 2,000 per head.

The other piece of good news is that in the drunch universe, at least in Mumbai and Delhi, there’s choice aplenty. Restaurants like Indigo, Celini, Olive, Blue Frog in Mumbai and those like Olive, Lodhi, Yum Yum Tree, Arjun Rampal’s Lap club in Delhi, all offer unlimited alcohol with (or for) lunch. Though the martinis at Yum Yum Tree do tend to shrink with each order, the waiters never complain. Others like Magique and Smoke House Deli offer alcohol as add-ons. Loosely translated, this means that the alcohol will flow as long as the credit card is good. The one difference, of course, is that private drunches don’t go on endlessly till dinner. Most start shutting the beer taps by four-is.

The point, all the same, is to keep up with the Sunday routine—not do anything in a hurry, not even nibble on a mezze. The ultimate objective is a state of happy high rather than drunken daze. You can saunter across to the Tapas bar and get yourself a Gazpacho or a calamari from a Spanish Tapas bar, or a lamb chop from the grill, all this while holding a beer, or a glass of cava or wine.

It’s time for a clarification: drinking during the day might be ‘in’, but drinking yourself into a wall-eyed stupor continues to be out.Olive Beach sells its Sunday Brunches with the tagline, ‘Sundays like God meant them to be’. So it says on a water-colour of a pair of chappals planted in sand before a calming sea. While this is lure enough, there is blasphemy in store. Despite its name and how it likes to sell itself, the bar refuses to serve a drink like God meant it to be—in a glass with nothing else. That’s the funny thing about drunches, the booze must always be spiked with something unhealthy like apple or orange juice.

It’s all about fruity drinks, or even a sangria. “We don’t get a lot of very heavy drinkers…but a lot of people come by on a Sunday to nurse a hang-over and sit back with a Bloody Mary,” reports Dipali Gupta, brand manager for Impresario Events, famed for their Smoke House and Mocha properties (their drunch at Smoke House Deli in Delhi is one to die for). According to her, the drink isn’t the focus, it’s a conversation facilitator.

But don’t get Gupta wrong. We’re still drinking quite a bit and we’re drinking in the evening. It just means that the poison du jour is more likely to be a mojito or light beer than Scotch on the rocks. It’s also true that guests are eating more too, but that’s relative as well—it just means they are eating more compared to parties where they nibble on crackers with Foie gras.

Even though it hardly seems right to kick the Page 3 Party while it’s limping (Open has already predicted its demise), it’s a difficult temptation to resist. Parties are losing out to drunches, and with little hope of levelling the score. Fun and style, however, as AD Singh says, isn’t the only reason drunches score over parties. Drunches are laidback and conversational, about unwinding and schmoozing. In contrast, parties are places where guests most often find themselves screaming over the music into each other’s ears, with random bits of others’ wailing providing added sound-effects. “A drunch is far more relaxed than a party because even after three-four hours out drinking, you still have some of the day left. The afternoon drunches work because they are an excellent combination of people, food, conversation, drinks and ambience. A night party is almost never a combination of all these elements,” says Image Consultant Sangeeta Kuriakos, the lady behind the famed Chivas Brunches in Delhi and Mumbai, which she after some goading admits ended up as drunches.

But everything about the drunch isn’t as strait- jacketed as we’re leading you to believe. You see, even though they are supposed to be drinking lunches, blame our bargain hunting desi DNA, they end up eating into a lot more meals than originally intended.

Meanwhile, social commentators, fuelled by Urbandictionary.com, have started talking about slunches, which are late lunches and early suppers all rolled into one, anxious that now we have crossover meals for any time of the day. But regardless of what they tell you—the fact is quite simple enough—the West has started drinking more during the day, especially over weekends. And since we Indians are younger, faster, stronger and whatever else, we drink double the amount of alcohol on drunches. Our mimosas are simply stronger than those light beers being quaffed in the West. That’s another fact you can check.

Whether it’s in honour of the advice that a mid morning beer is the best way to rein in a raging hangover, or to catch up with friends you partied with last night, drunches are here to stay. This is not to suggest that partying after sundown is a thing of the past. They continue, and even more bafflingly, they continue with house music. It’s just that we’re getting more personal, and drunches are really the way to socialise with the people you actually want to socialise with.

Disclaimer: The author does not endorse drinking and driving, nor does this magazine. So, if you are hellbent on drinking your money’s worth from the open bar, get yourself a driver, even though cops rarely stop people for drunk driving during the day. We’ve all suffered dependency in some form or another. For example, we’ve all been periodically subjected to unending lunches with folks at office. You end up spending much more than you planned, practitioners of office politics smile at you like you were their childhood crush, and the intern is always impressed with his own drinking prowess. We’ve all been there; only, dreary lunches are not drunches. Once you order drinks to get over the dreariness, that’s when you’re at drunch.