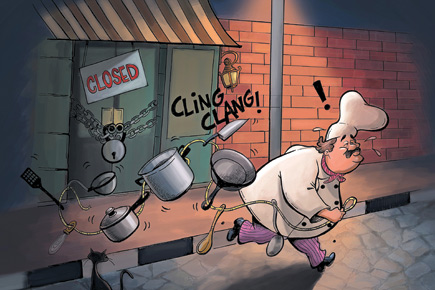 
There’s at least one ‘Oriental’ restaurant in Pune on B Shankaranarayan’s black list. In November last year, Shankaranarayan, moderator of the Pune Gourmet Club (PGC), held a group meeting at the said Oriental restaurant. Every single member of this 100-member food club is an amateur chef, and because they know how to cook, the PGC is naturally wary of the mutated recipes served in restaurants. So on that winter afternoon, as with most PGC outings, they went with their own menu and recipe. The plan was an Indonesian meal, starring Young Jackfruit Coconut Milk Curry, recipe courtesy the chef of the legendary Amandari hotel in Bali. “When the curry came, it was green,” says Shankaranarayan. “Instead of coriander seeds, the cook, who couldn’t read the recipe, used coriander leaves. So what should have looked golden, became green.” Suffice to say, the members of the PGC are yet to bury the hatchet.

In Bangalore, 33-year-old restaurateur Madhu Menon, founder of Southeast Asia eatery Shiok, has a thumb rule: “If you’re serving 5,000 meals in a month, and you’re 95 per cent error free, that still leaves you with 250 upset customers in a month.” Only telecom companies have worse odds of customer satisfaction. Shankaranarayan and Menon are on opposite sides of the Indian food trade—and they’re both frustrated. One with the quality of what’s on offer, the other with the pains of running a restaurant in this country.

On the one hand is the Indian foodie. A newly-minted creature, desperate to be part of a new snobbery, obsessed with the food pornography that is Anthony Bourdain’s TV show. So what if an Indian gastronaut is secretly haunted by the religious implications of consuming beef, pork—heck, even garlic? A gastro-tour operator in Paris recently related an anecdote about the only Indian customers she’s ever had. The couple asked for at least two Michelin-star restaurant reservations during their trip. At the first of the two eateries, the two looked at the menu, and the husband said, “Oh but we’re vegetarian, and we don’t eat onions and garlic.” To which, the Parisian tour guide says she replied: “Well, there’s not much you can do with lettuce and tomatoes in Paris.”

On the other side, there’s a restaurateur like Menon, one of the new brigade of entrepreneurs who got into the business because of his passion for cooking. He began Shiok with money from “the bank of dad”, as he puts it. A former tech professional who isn’t given to emotional decisions, his business plan was sound. But as Menon would soon realise, the Swot analysis is always optimistic.

Hospitality consultant Ravi Wazir says a restaurant “is the most difficult business to start and run”. The most procurable staff in this business are uninformed itinerants who can’t tell the difference between cinnamon powder and Cajun spice; the bureaucracy can literally kill your dreams; and the competition unashamedly lurks by the main entrance to poach staff. And, many young restaurateurs get caught in the dragnet that is the restaurant licencing system and end up losing their way.

In January, Meghna Raj, a 30-year-old former organic farmer, and dedicated vegan, decided to shut her two-year-old organic/natural foods café The Farm because she didn’t want to bother with the legal hassles any more. “Nobody tells you how complicated this business is, and there’s no platform or department you can go to and understand everything yourself,” says Raj.

In Maharashtra, a restaurant requires some 25-odd licences to operate. These permissions are issued by myriad departments of the municipal corporation, such as a health license from the health department, a Shops & Establishments Registration issued by the Shops & Establishments Inspector, even a Grinding Stone/Heavy machine Operating Permission from the Building & Factory department. There’s no single authority that clarifies exactly how many of these licences are required, and a page of government stationery that is officially Rs 5,000 may cost up to Rs 50,000 in ‘incidental expenses’ to procure. The biggest money spinner is the State Excise and Prohibition Licence. Restaurateurs say the same thing: Every single person who touches your file, right to the state excise commissioner, wants a cut. Since the authorities know that alcohol gives the biggest margins, the licence to sell it can cost lakhs to procure.

Once Menon got the restaurant going, he quickly realised that in this perpetually leaky biz, Murphy’s Law applies every day, 365 days a year. There are days when kitchen helpers simply don’t turn up; when someone on the staff has been poached for an extra Rs 500 somewhere else. Then there are bizarre, one-off scares: on 10 February, the Karnataka government decided to enforce a ban on cow slaughter, endangering Menon’s signature dish, Drunken Beef. The idea was dropped a few weeks later after severe opposition. But if it had gone through, the ban would have aggravated the financial migraine Menon was already suffering.

Little wonder that Bakshish Dean, one of the most successful executive chefs in the country, says he’ll never open his own restaurant. Or why chef Amit ‘Birdie’ Bharadwaj, a super-talented kitchen chief who’s worked in several five-star properties in the country, couldn’t succeed as a restaurateur. “This business has very difficult processes which a chef who’s spent his career behind a cooking range will have no idea how to handle,” says chef Dean. “People who are best at making money from it are companies that have enough financing and experience.”

He means commercial restaurant chains like Blue Foods, which owns Bombay Blue and Noodle House, and Delhi-based Amit Burman’s Lite Bite Foods, an umbrella company that runs Asia 7 and Punjab Grill. These large enterprises have better economies of scale, but they are not in the business of taking creative risks. It’s unlikely that Pune Gourmet Club members will find in such spots the kind of edgy, creative meals they get their kicks from. For instance, on the PGC’s third anniversary, Shankaranarayan devised a seven-course tasting menu that included shark poriyal, and Kabargah, lamb ribs cooked in milk and fried, served with a side of lotus stem chips.

The 57-year-old says his retirement to Pune after a 20-year career in construction supplies in Dubai completely demoralised his palate. “Once you know how something is supposed to taste, you can’t accept it any other way. It’s like going back to VHS after seeing movies on laser discs,” says Shankarnarayan. His struggle to find anything besides Punjabiised restaurant food was so crushing that he gave up trying and began creating dishes for himself. In September 2006, it evolved into the PGC, membership to which depends on one single thing—the desire to cook.

In Bangalore, Menon accepted defeat as well. After four years , on 22 March, he announced on Twitter: ‘Shiok is closing forever. We’re not moving anywhere else either. You have 10 days to try our food one last time.’ The restaurant had swallowed a chunk of money, and the entrepreneur couldn’t secure new funding to keep it going. At least that’s one less frustrated restaurateur.