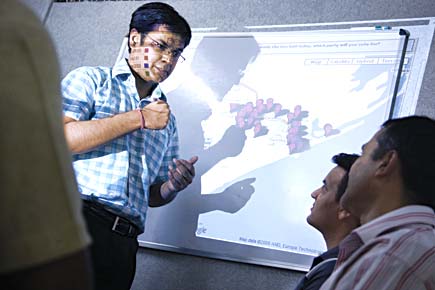 
PURAN CHAND SWAIN is Biju Janata Dal’s (BJD’s) MLA from Sorada in Ganjam district of Orissa. He is also an unlikely face of the information revolution that has silently swept Indian politics. Three months ago, his party bosses did not consider him a serious contender for the Assembly election. M Dandapani Patro was set to be nominated as the party’s Sorada candidate. But a survey by Viplav Communications, a Delhi-based political solutions and risk analysis outfit, rated Swain’s ‘winnability’ prospects higher than Patro’s; he had better ‘acceptability’ and ‘hold’ in Sorada. So the BJD, led by Orissa Chief Minister Naveen Patnaik, made the switch. Patro rebelled and stood from the party’s newly-estranged ally BJP. Swain won, Patro lost.

Orissa was among the few Indian states that had its Assembly polls held together with the recent Lok Sabha election. To complicate matters, of its 147 Assembly constituencies, several had either changed boundaries or been classified as reserved by the Election Commission’s delimitation exercise. Besides, the collapse of the BJD-BJP alliance had forced the regional party to search for suitable candidates in 63 constituencies that were held by its ex-partner. This is where Viplav, headed by Pallav Pandey, a 30-year-old IIT Kanpur alumnus, made a significant difference.

Through the use of proprietary tools like Constituency Management Software, which it developed, Viplav offers what it calls ‘voter relationship management’ solutions to political parties. One critical application of these tools is to suggest ‘winnable’ candidates.

Viplav suggested some who were not even on the BJD’s radar. The curious candidature of Premanada Naik from Telkoi exemplifies the role played by Pandey’s team. An engineer employed by the state government, Naik was under suspension on charges of indiscipline when Viplav recommended him for the creative use he had made of his time off work. He had been active as a voluntary do-gooder, ensuring that Telkoi’s Scheduled Tribe population was getting their due from assorted government schemes. Surveys rated him higher on winnability than the sitting MLA Niladri Naik. The choice came good. The suspended engineer won.

It was surveys such as these that led to the break-up of the 11-year old BJD-BJP alliance in the first place. Naveen Patnaik was already put off by the role of saffron forces in the Kandhamal violence, but it was a hardnosed ground assessment that gave him the courage to act on it. “The BJD commissioned Viplav to carry out an opinion poll,” says Pandey, “Our survey revealed that BJP’s electoral prospects rode on the goodwill that BJD had generated, that BJP had twice as many seats because of the alliance.”

Gutfeel after the 2008 Zila Panchayat elections, in which the two state and national level partners fought each other bitterly, had already signalled to the BJD that it could do without the BJP. Naveen Patnaik and his party’s chief strategist and Rajya Sabha leader Pyari Mohan Mohatpra needed confirmation. This came in the form of a 21,000-voter strong sample survey in the state.

“Our survey in January 2009 showed that 61 per cent of voters in Orissa wanted Naveen Patnaik back as the chief minister,” says Pandey. The exercise not only assured the BJD chief that perceptions of his credibility and integrity were electorally powerful assets, it gave his party ‘winnability’ prospects of 80:20 in the upcoming Lok Sabha polls, as against 60:40 in 2004, when it fought alongside the BJP. The implication was that retaining the alliance would amount to giving the BJP a piggyback ride.

But the agency was aware of a fundamental flaw in the gathering of voter opinion data—deliberate human error, especially in difficult terrain. “There is a temptation for surveyors to fill as many forms as possible in a day, which leads to fudging of responses,” says Pandey, “They sit in hotels and fill in data instead of going out to interview respondents.” What you get, often, is a picture of what surveyors think you’re expecting—a worse version of another kind of common statistical error that arises from respondents answering exactly as they think you’d like.

Viplav’s innovation was in minimising such errors by cleverly using cellphones and M-Survey, a software it developed. It worked smoothly. Questionaires were sent via mobile networks to handsets loaded with the application and given to each surveyor. These were made to record and transmit the time spent on each interview and also its geographical coordinates—thanks to GPS technology installed on a little matchbox-sized device, which let the control room pinpoint the location on Google Maps. This system of electronic monitoring ensured proper compliance with the survey methodology even in the state’s remotest regions. Field data was fed into M-Survey’s website more or less live, ready for collation and analysis. It was quick and accurate.

Between January and April 2009, Viplav was given the task of spotting winnable candidates, especially for delimitation-affected and BJP-held constituencies. Some fine judgment calls had to be made. Take the case of Archana Naik. From a wealthy family, with her father Padamalva Behra the MLA from Patkura, she had been a Zila Parishad member since 1992. In 1995 and 2000, she had failed to win the Patkura Assembly seat as a Congress candidate. However, as a BJD candidate for the Lok Sabha, she had won the Kendrapara seat in 2004. She was, naturally, a toast of the party.

Yet, Viplav had the professional nerve to advise the BJD to pick Bai Jayant Panda for the 2009 election instead of Archana Naik. “We found in our surveys that she was facing significant anti-incumbency,” explains Pandey. Even though several senior BJD members wanted to accommodate her as an Assembly candidate instead, she was eventually denied any kind of ticket. She rebelled and contested the neighbouring Bhubaneshwar Parliamentary constituency as a BJP candidate, and came in third.

As far as campaign inputs go, Viplav’s principal advice was to have the CM play a leading role, given his survey-confirmed stature as the party’s single biggest vote catcher. If Naveen Patnaik were to personally ask for votes, the consultancy reasoned, he could overcome the local incumbency effects of party MLAs. To that end, Viplav set up a telephonic campaign, with the CM’s recorded message sent out to 5 million phone subscribers in the state.

This was achieved through supercaller.in, a website designed to reach swing voters who haven’t made up their minds. Naveen Patnaik simply had to call a number to record his voice, and Viplav did the rest. It filtered its all-India mobile number database for an appropriate subset and activated the messaging process.

There were two telephonic messages from the CM. The first was meant to set the tone of the election as ‘Naveen versus Them’. “Hello, I am Naveen Patnaik speaking…” it began, before speaking of his late father Biju Patnaik’s “dream for Orissa” and asking for the listener’s “love, affection and blessings to realise it”. The second message was dispatched just before polling day, and directly asked people to vote for the party, speaking of Orissa’s poverty and its “step-motherly treatment” by the Centre that his father had fought all his life against.

The father’s regional popularity was now the son’s. And the attempt to give the polls a presidential turn suited the CM all the more because he was simply the best known leader in the Orissa fray. It also took attention away from any voter assessment of the local MLA’s performance. As a play for the swing vote, it proved quite effective. There were thank-you calls as well, asking for people to record their suggestions. About 5,000 calls are currently still being received every day.

Once India has 600 million phones, as projected by 2012, such campaigns could be even more effective. But the key to victory, says Pandey as he sharpens his tools for polls in Maharashtra and Haryana, is an “unbiased perspective”.