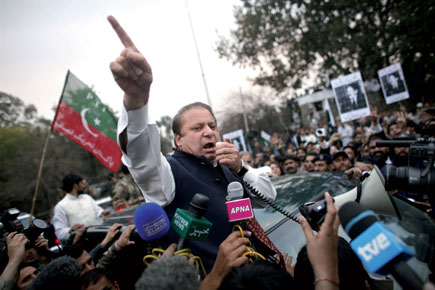 
Pakistan and India are masters at the art of sending each other mixed signals. The last Indian journalist posted in Islamabad was forced to depart just as Prime Minister Nawaz Sharif’s new government took office amid all the right noises of friendship with Delhi.

The Press Trust of India correspondent, like the representative of The Hindu before him, was told that his visa was not going to be extended. So, both slots of Indian correspondents in Pakistan are officially vacant. With no Pakistani correspondent stationed in Delhi since May 2010 (a choice exercised by the Pakistani media), it is for the first time in living memory that there are no correspondents of either country in the other’s capital.

My information suggests that The Hindu has sought a visa for a new correspondent and it has been told that its application is being processed.

These developments set me thinking about my own visa travails as a correspondent of that newspaper in Islamabad from 1997 to 2000. One thing is certain: an Islamabad or Delhi posting is not for the faint-hearted.

It was while working for The Hindu in Colombo that I was asked by its then executive editor, Malini Parthasarathy, whether I would like to move to the Pakistani capital. My answer was ‘yes’. In my book Dateline Islamabad, there’s a reference to the many photographs my wife and I had to supply the Pakistani authorities and our private joke that these would have been put up at various police stations across Islamabad.

Having landed there in April 1997, it was a tough job converting our entry visa into a year-long resident visa. The process, I recall, took months. We were allowed three exits a year, so these were to be used judiciously. For long stretches, we were without a visa. Armed only with a letter that our request for a visa was pending, we essentially lived the life of illegal residents awaiting a decision on our fate.

Then as now, I was convinced that I had two jobs to do in Islamabad: one, report for the paper, and the other, to ensure that my successor could land. It was important not to give the authorities any excuse to shut down the newspaper’s office there. I was lucky that I succeeded in both endeavours. But it wasn’t an easy job.

Indian and Pakistani diplomats get assignment-length visas. Journalists, on the other hand, are subject to annual visas. On one occasion, after my visa request had been pending for long, I was called to the office of the Director-General of External Publicity in Pakistan’s Information Ministry. He seemed a kindly old gentleman. After pointing out that he could have been my father, he proceeded to deliver a gentle admonishment.

It was delicately put, but the message was clear. My visa would be kept pending if I continued reporting the way I was. Clearly, the Pakistani establishment wasn’t happy with my reports. A few days later, I received another call from the Director-General’s office: my passport with the visa could be picked up from the immigration office. Flipping through the pages of my passport, I found that the number of exits that should have read ‘three’ had been reduced to ‘one’. It was devastating news. How could one live and work in a situation where one couldn’t go home to one’s family in an emergency?

All these fears led me to a bold course of action. I called the Director-General and told him that there had been a “typing error” in the number of entries and could not accept the visa with this error. I knew and he knew that this was no error, it was a signal that his masters were displeased with my journalistic output. Between day and evening, however, my move had borne a result. He called me and said the ‘error’ had been rectified and I could get my amended visa affixed. It was a great relief.

One had to be extremely alert just to ensure that the loaded-against-you status quo did not worsen. One of the ‘traditions’ followed by Indian journalists in Islamabad at the time was that you had to submit your copy to one Mr Salim in the telegraph office (outstation reports in those days were filed by having them wired across). I was to do it every week or month, and it was a painful job. Mr Salim would even call up from time to time and tell me that my copy was due for submission. He, in turn, would pass my work on to his intelligence masters.

After telling Mr Salim on a couple of occasions that I wanted my pile of copy returned, it began to happen. And then, something odd happened once. I noticed that extensive notes had been made on my copy. Someone wasusing it as an exercise! Truth be told, I was flattered.

I had no doubt that my visa could have been in jeopardy had I not complied with Mr Salim’s requests. Soon after The Hindu went online, I told him that whatever I wrote was on the paper’s website and that they could take it directly off the web. It took me some time to convince them, but in the end they agreed.

Since 2000, THE India-Pakistan visa scenario for journalists has only deteriorated. If I had three exits and three cities to visit, my successors have had a single city to visit and often no exit. None of the positive rhetoric used by leaders of the two countries on the state of their relations has had any effect on this vexed visa scenario.

One of the things I realised was that there wasn’t much influence you could bring to bear on your case. On the one instance that I wanted to take my in-laws to Taxila, a stone’s throw from Islamabad, all I could do was wait; to go anywhere other than Lahore, Karachi and within Islamabad, special permission had to be sought. However, once I had given up all hope (we were to leave in the morning), an official of the Press Information Department drove up to my home and handed me the permission for our Taxila visit. It was a moment of exhilaration.

Basically, intelligence agencies believe that all journalists from the other country are spies. And there’s not much you can do to convince them that you are not. In my case, the presence of my family was a major source of support as I went about reporting and dealing with the hostile living environment created by these agencies.

One can only hope and pray that Indian and Pakistani journalists will once again be able to get visas to go about the business of reporting for their news organisations. It’s difficult to fathom why the people of India and Pakistan should be left to get their information on each other from Western sources alone.

Friends have told me that the Indian journalists haven’t had their visas extended because Pakistan’s permanent establishment wants to send a ‘signal’ to Prime Minister Sharif that he should moderate his friendly overtures to India. I’m not convinced by this argument because one of the two correspondents returned home before Sharif took office.

It could simply be that the Pakistani establishment has chosen to apply a simple rule: no Pakistani journalists in Delhi equals no Indian journalists in Islamabad. As usual, the reason for such decisions or non-decisions is but a matter of speculation. Such is the ground reality of India-Pakistan relations.

Amit Baruah has reported for The Hindu from Delhi, Colombo, Islamabad and Singapore