The Worst Session Ever

Indian Parliament, once the pride of the country’s founding fathers, has been reduced to a sorry spectacle. And how 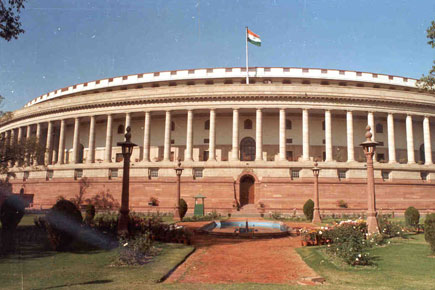 Indian Parliament, once the pride of the country’s founding fathers, has been reduced to a sorry spectacle. And how!


Lok Sabha Speaker Meira Kumar began her customary valedictory speech a little over an hour after lunch break on 7 May, the last day of the Budget session of Parliament. This is how the Speaker wraps up every session, briefly recounting the work done by the people’s elected representatives during the session. It had been a busy session, she said, starting on 22 February and ending on 7 May with a month-long recess for standing committees to deliberate and examine demands for grants. The House passed the Union Finance Bill despite the cut motion moved by a divided opposition, allowing the Government to continue in office. A few other Bills were passed too, and Meira Kumar listed those in her address. But then, as her tone changed slightly, she moved on to enumerate what the House had not been able to do because legislators were too busy obstructing business.

The statistics quantify the mess that the session had been: nearly 70 hours were lost to interruptions and forced adjournments. During the session, 620 ‘starred’ questions were listed, of which just 76 questions could be answered orally. That is an average of about two questions a day during the short session: two questions a day to hold a government of nearly 80 ministers accountable to more than a billion Indian citizens! Yes, that’s right. At the beginning of the session, the Government’s agenda was rather ambitious, almost aggressively so: it wanted Parliament to pass 27 Bills and wanted to introduce 63 new ones. At the end of the session, just six had been passed by both Houses. This time round, the Lok Sabha spent less than 50 hours examining the Budget. Just 20 years ago, the House was spending nearly double the time.

“It is a matter of great concern that the House did not function on many days due to frequent disruptions,” Meira Kumar said, adding that this worsening problem was not just her concern. “A sense is growing in the country that Members of Parliament prefer to highlight public issues by disrupting the house and not through discussions and debates. Thus, in a fundamental sense, the house is facing a serious dilemma.”

On eight days of the session, the Lok Sabha had no Question Hour at all. But raucous anger, there was plenty of. Whether it was the Budget or new laws under ‘discussion’, members chose instead to argue about the IPL cricket controversy, phone tapping and, of course, the Women’s Reservation Bill—which the Government eventually did not bring in for passage in the Lok Sabha after all the hue and cry. (Sushma Swaraj, Leader of the Opposition in the Lok Sabha, says the Bill has become the “first casualty of the wheeling and deal-making done by the UPA Government to survive the cut motion”.)

As Meira Kumar tried to appeal to the collective conscience of the MPs present, she narrated an incident to highlight how people were being let down by their representatives. “The other day,” she recalled, “a large number of differently abled children came here to watch the proceedings of the House at my invitation. I could see the disappointment on those innocent faces because they could not watch the proceedings due to an abrupt adjournment…” So, while she ended her address with an appeal to MPs to let the House function, she also cautioned: “Disruption of the House will gradually render this institution irrelevant.”

Meira Kumar later told journalists that she wants to speak to all parties on shifting the Question Hour—currently scheduled at 11 am, the day’s start—so that questions can be taken up at some other time if the day starts with disruptions. “Very few questions were asked,” she complained, “Since the Government is accountable to Parliament, it is vital that questions are asked.”

It’s a vexed issue. India’s Vice-President and Rajya Sabha Chairman Hamid Ansari also chose to dedicate a large part of his valedictory address the same afternoon to the subject of disruptions. “Notwithstanding the work done, an overview of the session cannot avoid the impression that much time was lost in disruptions and adjournments arising out of disruptions,” Ansari told the assembled elders. The Question Hour could not be conducted on 13 of the 31 scheduled sittings—40 per cent of the working days of the Upper House. “These trends in the conduct of business have invited adverse comments and lowered the image of the Legislature in the eyes of the public,” said Ansari, “Correctives have thus become imperative.”

That both the Lok Sabha Speaker and Rajya Sabha Chairman chose to end the session on a sad note is a reflection of how serious the problem is. The just concluded Budget session seems to have been the worst in recent history, both in terms of business conducted and the way it was done. The session even saw Ansari himself under assault, sort of, when some MPs tried to snatch microphones on his table and threw its stationery about while his securitymen shielded him.

With the main opposition BJP and ruling Congress going at each other, there was one too many verbal spats, though not without the participation of other parties too. The likes of former ministers Ananth Kumar (Lok Sabha) and Mani Shankar Aiyar (Rajya Sabha) set off protests in the House when they hurled ‘unparliamentary language’ at their political opponents. The Congress’ Aiyar, who used the f-word of politics for Rajya Sabha Leader of the Opposition Arun Jaitley (‘fascist’), had to apologise later. But the BJP’s Ananth Kumar refused to apologise for his remarks against Rashtriya Janata Dal (RJD) chief Lalu Prasad. Made on 5 May during a debate on Census 2011, the BJP leader’s words were expunged from House records, but they resulted in an adjournment all the same because of the chaos they caused. It was eventually left to his party senior Sushma Swaraj to apologise on his behalf to the House and the Chair, so that the House could function. Still, parliamentary debate has rarely ever sunk to such lows.

STARING AT THE ABYSS

“Little work was done other than passing the Budget,” says MR Madhavan, head of research at PRS Legislative Research, a think-tank that tracks Parliament’s working. “Lok Sabha passed five Bills without debate. The Rajya Sabha witnessed some unfortunate scenes that led to the suspension of seven MPs during the debate on the Women’s Reservation Bill. In sum, the session was yet another lost opportunity to deliberate and pass legislation.”

PRS’s analysis of the session throws up interesting insights: 40 per cent of the Bills in the Lok Sabha were passed without discussion, and most were passed in the last four days of the session. Look at recent parliamentary sessions, and you can detect a pattern: a large number of valuable working days lost to disruptions and interruptions, with legislative business pushed to the fag end for a hurried passage of most Bills. “By passing Bills without deliberation,” says Madhavan, “Parliament could be said to have fallen short of fulfilling its constitutional responsibility.”

Ironically, disruptions by the opposition and suspension of the Question Hour are perhaps the most efficient way of ensuring that the Government is not held accountable for anything. “Parliament has several procedures by which MPs can draw the attention of the House and Government to important issues. The zero hour is meant for this purpose. In addition, there can be detailed debates on issues,” says Madhavan. “The Question Hour,” he adds, “is intended for MPs to keep the Government accountable by requiring ministers to answer questions pertaining to their ministries. By disrupting Parliament, MPs miss the opportunity to hold the Government to account. Disruptions actually aid the Government in avoiding issues that it finds difficult to defend. Indeed, one could argue that it is the opposition’s interest to keep Parliament functioning, as that provides an opportunity to highlight the Government’s shortcomings.”

Only, the opposition seems to have its own logic that defies what parliamentary democracy stands for. “We use whatever tools are available to us under the law to raise issues of importance,” says Swaraj. “The BJP alone does not disrupt proceedings. Disruptions come from all sides because there are issues that need to be highlighted. But the Government’s poor floor management is to blame in this session.”

Over the years, things have gone from good to bad to worse. PRS data shows that the Lok Sabha met more frequently in the first two decades of our republic. On average, the Lok Sabha clocked about 120 days every year till 1974. But after 1989, it has averaged 74 sittings per year. “There was not even a single year between 1952 and 1974 that had less than 100 sittings; since 1989, there has not been a single year with 100 sittings,” says Madhavan, the statistics underlining the fall.

For those who expect the younger lot to make things better and the future to look up, here is another startling fact: young MPs, those below 40, took part in less than 10 per cent of the debates. Congress General Secretary and Amethi MP Rahul Gandhi, who was present for two-thirds of the session, did not speak in the House even once.

Absent ministers are arguably a bigger cause for concern. Recently, BJP leaders objected to the absence of Cabinet minister MK Alagiri when a question relating to his ministry was asked. It turned out that the Dravida Munnetra Kazagham leader was holidaying in the Maldives while the session was on. His leave, a Right to Information application revealed, had been cleared by the PMO. Considering what those who stayed back did in Parliament, maybe you really can’t blame the PM for allowing Alagiri a vacation.