The Other Headlines and Battles

…that women in India will have to fight outside Parliament and the armed forces. 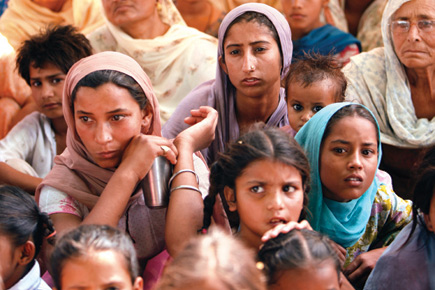 …that women in India will have to fight outside Parliament and the armed forces.


No way could you have missed it. India’s women are on a roll this month. Thirty three per cent of Parliament and state assemblies possibly reserved for them. And the right to serve full terms, not just 14 years, in the forces is now theirs.

But those are not the only stories—and certainly not the complete story—about our women this March.

Two quiet headlines in the past two weeks were buried under the media noise around Indian women’s victories in public spaces. Both these headlines had to do with our women in private spaces—not about them as Parliamentarians and Officers, but as Sexual Victims and Mothers.

»The Chief Justice of India advocates ‘due regard’ for victim’s wish to marry her rapist (8 March 2010, The Indian Express)

So, even as we debate whether bahus and betis will end up crowding our Parliament and if or not women should now be allowed in combat, the real bahus and betis seem to have no choice but to fight a long, hard war. Because even those apparently speaking up for women are making it so much more difficult a struggle for them.

The Delhi High Court, while advocating a lenient view of mothers convicted for female infanticide, noted: “The mother is a mere puppet with strings being pulled by men who lecture her.” Just five days earlier, in his address to the national consultation on access to justice, relief and rehabilitation of rape victims, the Chief Justice reportedly said: “Due regard must be given to their [rape victims’] personal autonomy since in some cases the victim may choose to marry the perpetrator…”

Okay, so both the High Court’s recommendation and the Chief Justice’s statement are ostensibly aimed at the welfare of women. Yet, both actually derive legal morality not from an instinct to empower women, but from a sensibility that is patriarchic and protectionist. Dilute all punishments, whether she is the perpetrator or the victim, because she’s a woman.

Sure, many societal pressures and compulsions abet female infanticide, but they cannot be allowed to overwhelm us while deciding on punishing those guilty of this heinous crime. In a country where the sex ratio for age zero to six is 927 girls to 1,000 boys—the worst of these numbers coming from rich, urban Indian cities—all punishment to do with female infanticide should be meted keeping the girl child, and only the girl child, in mind. Separating the literate from the illiterate, poor from the rich, younger from the older, married mother from the unwed one, virtuous from the whore, mother from the father while dispensing justice in such cases will further wrong the thousands of baby girls who are murdered routinely.

Let’s extend the High Court’s logic. A mother-in-law convicted of burning her daughter-in-law for dowry could also appeal for clemency and remission of sentence. She, too, could claim that she is—and she really might be—a ‘mere puppet with strings being pulled by men who lecture her’. In fact, the High Court’s observation on a mother guilty of infanticide could easily be cited to seek mercy for such a mother-in-law: ‘The turbulent waves of social thinking have called her to folly and the desert has called her to doom.’

Next. Is it fair that with such low conviction rates in rape cases, harrowing interrogation, distressingly lengthy trials, huge judicial backlogs, we should be talking about victims marrying rapists? How can an offender be let off in the name of the victim’s ‘autonomy’? What’s the guarantee that the victim isn’t being coerced into marrying her rapist? And, really, rape a woman, marry her and go scot free? If this indeed were to be allowed, how long would it take for a rapist to figure out that he could divorce the victim after he’s let off for having married her?

Less than four years ago, making a similar ‘pro-woman’ gesture, the Cabinet had cleared a Bill to be tabled in Parliament proposing that only women judges try rape cases. Firstly, our courts hardly had (or have) that many women judges—the Supreme Court has had only three, and none for nearly four years now since the last, Ruma Pal, retired. This telling shortage apart, the Cabinet didn’t seem to realise how regressive its proposal was. By assigning rape cases only to women judges, it was making rape, a human rights violation, a women’s issue alone. It was assuming that all male judges are insensitive and gender-biased, and all women judges are not. If the Bill had been passed, then maybe the only male involvement in rape cases would be that of the rapist and defence lawyer; yet another instance of a ‘pro-woman’ intent ending up gender ghettoising.

In the same speech he made on 7 March speaking for the right of rape victims to marry their rapists, the Chief Justice also said that while deciding on the welfare of rape victims, judges, lawyers and social activists should not take an “overtly paternalistic approach”. Yes, My Lord.