The Ghats are Alive

Talking Modi by the Ganga 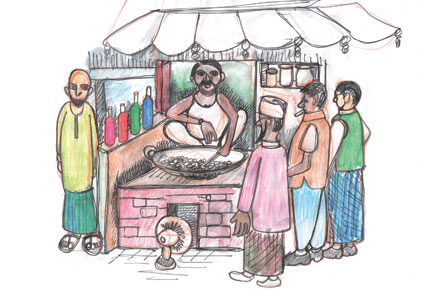 Talking Modi by the Ganga

It’s the same old city, reputed to be the world’s oldest settlement of people. No one is in a hurry, it’s as if everything moves on a cosmic timescale. But beneath the calm, one can sense something astir among those who swarm Varanasi’s ghats, streets and shops that sell chai, khana and thandai (with bhang as an option). With Narendra Modi set to contest this seat to gain entry to the Lok Sabha, and Arvind Kejriwal as a direct challenger, voters here seem to know the country is watching them.

The dhobis (washermen) have not been out on the ghats for two days in a row, when Raj Kumar Dhobi, 40, comes out for a walk by the Ganga. He settles at a tea stall next to a temple on an elevated platform. He sits by the temple, legs folded, to have chai. From here, he has a panoramic view of the Ganga that flows languidly in front of him, like the passage of time. “I cannot stay away from Ganga maiyya even for a day. It’s like an eternal love story.” He is thin but has a muscular frame. Though he has a teenager’s body, his face gives away his age. His short hair is greying. His family has been in the profession of washing clothes by the holy river for generations. For the past 25 years, he has spent five hours a day, knee-deep in water, all year round. His feet are broad and swollen, and look like that of a duck—they might almost be webbed. “We even dream of washing clothes,” he jokes, and says he doesn’t know any other way of earning a livelihood.

Last time, he voted for Mayawati. This time, he will do the same. His extended family, numbering close to a hundred across four generations, are all supporters of Behenji. “They (agencies that work to clean the Ganga) want us leave the ghats because we pollute the river. The Ganga is our mother. How can we pollute our mother?” he asks. He says his community felt secure under Mayawati’s rule when the agencies didn’t bother them with eviction notices. Now, they have to depend on caste patronage networks to deal with the situation.

Another Dalit, 65-year-old Sukha Ram is meek and small. Attired in a soiled dhoti kurta lined with sweat marks, he forcefully starts rubbing the shoulders and back of the neck of a lean Italian nirvana-seeker with a goatee sitting with his partner on the steps of Dashashwamedh Ghat. The man is stunned; after regaining his composure, hands folded, he politely asks Sukha Ram to stop. He pretends he doesn’t hear him and continues. Finally, the Italian gives him a hundred rupee note and Sukha Ram stops reluctantly. He puts the note in his back pocket and joins Raj Kumar at the chai stall. He, too, is a Mayawati supporter, but insists that she has done nothing to change his life. His wife is critically ill, and he has no means to pay for her treatment. He hopes for a respite from her prolonged suffering, perhaps even death. Politics offers a temporary release from his miseries. “Modi is an outsider, so is Kejriwal,” he says, flashing a toothless grin, “Outsiders are good.” He gets all his business from outsiders. “Kejriwal is oonest,” he says in his accented English. “But honesty is not always the best policy,” he laughs.

Another elderly man sitting nearby, who doesn’t reveal his name because he believes names are unimportant, pipes in to correct Sukha Ram: “Didn’t you read the newspaper today? How will you?” He belittles him; Sukha Ram is functionally illiterate but can sign his name. The old man mentions that he is a ‘senior’ government functionary who works for the irrigation department before he adds, “Modi’s ancestors are from Varanasi. This election is a homecoming for him.”

The mood at Swaminath Akhara on Tulsi Ghat is upbeat. A dozen-and- a- half wrestlers, young and old, are here for evening exercises. Vinod Yadav, 55, owner of a dairy farm and an erstwhile wrestler, is clad in just a langot as he lies in a pool of mud. “The Modi-wave is catching on,” he says, matter-of-factly, before qualifying, “but it’s too early to say anything for sure.” Though a Yadav himself, he is disillusioned with UP’s Akhilesh Yadav government. “Kejriwal is gaining support,” he says, confidently, “because he is honest.” Honesty, or the lack of it, in his view, is the single biggest reason for spiralling prices. “The system is made deliberately inefficient to profit very few at the cost of the rest. Modi might be in for a surprise.”

Yadav’s views are not shared by Amit Maurya, 21, who belongs to one of the city’s few Dalit families that have done well in business. His family owns engineering colleges, malls, and has recently ventured into housing projects. He heads an engineering college with his brother. Like almost every business family in UP, their political clout has much to do with their dramatic increase in wealth. Maurya feels that Modi will win the Varanasi seat by a large margin. In the rest of eastern UP, it will be a direct fight between the BSP and the BJP.

“Varanasi is a stronghold of the BJP. Here anyone, you and I, let alone Modi, can win an election on a BJP ticket,” he says.

Holi festivities here will culminate in a protracted summer of intense campaigning. It is a late spring afternoon, but the sun is menacingly hot. The stone-paved ghats are too hot to walk barefeet. A group of 25 Modi supporters are sitting on the shaded steps of a ghat. Some photographers and media representatives surround them. Sitting at the centre of this frenzy is a Modi lookalike—a poor substitute, really, sporting a white beard and wearing the garish headgear of an Indian groom. Kejriwal’s assertion that he will humble Modi here in Varanasi is being ridiculed by the Modi party. Apart from two local BJP workers, most people in the group are outsiders. There are hardly any locals in the audience. Some expats sit at a distance, gawking at the scene.

Some young men stand around, their faces smeared with Holi colours. They are not part of the sloganeering group, but are nevertheless ardent Modi supporters. They assert that if students support Kejriwal, the youth support Modi. But aren’t students also the youth? Among them, Bhuwan Pratap is getting restless. He cuts short a friend to say, “Whether Modi represents development or not, we will vote for Modi.” Why? “Because Modi is Modi,” he says.

They agree with Kejriwal’s assertion that the media is unduly biased in favour of Modi, and is thus compromised. Prasad is not amused. “This is not new. The only difference is, earlier the media portrayed Modi as a mass-murderer at the behest of the Congress, now the same media talks about Modi as the man behind Gujarat’s success story,” he says. As an afterthought he adds, “If anyone, it’s Kejriwal who is a product of media hype… now everyone is talking about him.”

Many locals like the idea of increased media focus on Varanasi. If their MP goes on to become the PM, Varanasi will get a much-needed facelift, they feel.

Rakesh Singh, owner of the famous Harmony Book Shop at Assi Ghat, however, is worried. All the extra political focus on Varanasi will attract all sorts of goons from neighbouring regions, he expects. The sedate life of the city will change, he fears, turning the air ugly.

Hindus and Muslims have lived cheek-by-jowl here in complete harmony for centuries, pandits and ustads, as co-workers. But Modi’s candidacy has instilled a sense of vulnerability among many Muslims in the area.

Azam Miya, 62, a retired railway employee, lives in Sarai Harha, where Bismillah Khan lived and composed music for seven decades. This is not very far from the Kashi Vishwanath temple that shares a common wall with a mosque. Considered a potential communal flashpoint, this complex has been a high-security zone for decades. But for Azam Miya, it’s a symbol of mutual brotherhood. He is out in the evening to savour Holi sweets in the local market of his congested locality where lanes and bylanes, lined by unbroken chains of tall houses on both sides, criss-cross each other like a maze. A man smears yellow gulal on his face. He smiles and hugs him thrice in customary Holi tradition. It is Jai Dev, his childhood friend.

Jai Dev is a Modi supporter and argues that he supports the man not because of the BJP, but for his strong credentials as an able administrator. Azam Miya smiles to say politely, “I will never vote for Modi. The reason for this is not he is a BJP leader, but a threat to our Ganga-Janumi tehzeeb (etiquette). I don’t say this as a Muslim, but as an Indian.” Jai Dev agrees that Modi has dictatorial tendencies, but points out that as Prime Minister, he can’t do things like he did as the Chief Minister of Gujarat. He asks Azam Miya, “Won’t you agree that a benign dictatorship is good for our country which has been pushed to the brink of collapse?” Azam Miya responds with due politeness, “Dictatorship is never benign,” and then laughs and swallows a gujjiya in one gulp. “We have agreed to differ on this issue,” he says.

In the same bazaar, a group of Muslim clerics, dressed in spotless white and sporting beards, are talking about Modi. He can’t ‘break’ India, they say, referring to the sense of outrage over Gujarat among local Muslims. But at the same time they are equally unhappy with their own state’s Akhilesh Yadav government. Muzaffarnagar is fresh on their minds. “Communal passions had flared up for siyasati rajniti (politics of power). Muslim youth are unhappy. The Allahabad High Court judgment on Ayodhya—the Babri Masjid demolition case—some four years ago was pro- Hindu… They want us to forget everything. How can we forget?” asks Abbas Haider, a teacher at a local madrassa.

Abdul, 55, a rickshaw puller, is relatively restrained in airing his views. He is unwilling to say anything about Modi. “We will see,” is all he ventures. “I am not only a Muslim, but a poor Muslim.” Speaking of a local Muslim strongman, Mukhtar Ansari, Abdul says, “He always fights elections as an Independent and divides Muslim votes. Such leaders are khush khabari (good news) for Modi.”

He lists those he could support: Kejriwal, the BSP or SP, against the BJP. The Congress is missing from his list. “On the eve of voting, we Muslims will get a message, in rural and urban areas, about who to vote for. Then, we as a community will vote for that party. This way, the entire quam (community) will remain politically relevant,” Abdul says.

Muslims constitute more than a fifth of Varanasi’s population. Like Abdul, many believe that the Muslim vote in Varanasi will play a significant role in shaping the country’s politics.