The principal opposition party’s Indore conclave signalled an RSS-induced resolve to put their house in order and broaden the party’s vote base. 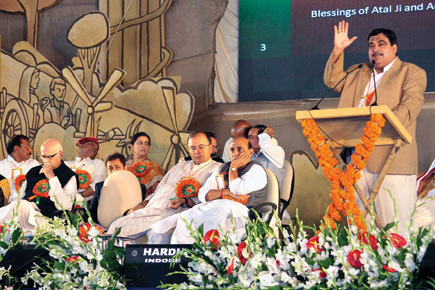 The party’s Indore conclave signalled an RSS-induced resolve to put its house in order.


The Bharatiya Janata Party (BJP) is a much younger party compared to the Congress. Barely 30 years old. But it needs to recast itself more urgently, if it wants to arrest its own decline. So, it only makes sense to start by looking and acting younger. That is precisely the message that the party’s new leadership set out to send at the three-day National Executive at Indore in Madhya Pradesh, last week.

When the BJP was formed in 1980, Nitin Gadkari was a young man, barely 22—a functionary of the Akhil Bharatiya Vidyarthi Parishad (ABVP), the Jan Sangh’s student wing. And, now as he takes control of a party in shambles, replacing the dhoti clad likes of LK Advani, about three decades older, it again makes sense that Gadkari also appears more contemporary in both thought and appearance. Last week, when Gadkari made his first address as president to the party’s leaders at the National Convention and National Executive, he was not clad in dhoti-kurta but in a jacket and trousers. He spoke first not of the BJP’s vow to build a Ram Temple at Ayodhya, but of its scheme for the poor called Antodaya, launched during Vajpayee’s regime in 2000. While at it, he also burst into a song to entertain party workers, but not without sounding out troublemakers in the party leadership that he was watching.

The cacophony and phonetics apart, the message of the Rashtriya Swayamsevak Sangh (RSS), delivered through Gadkari, is amply clear: to stay relevant in politics, the BJP needs to change. Quickly. It is time, therefore, to shift gears in an attempt to attract younger voters, minorities and the socially and economically downtrodden.

This was necessitated by the BJP and its allies’ second successive Lok Sabha defeat at the hands of the Congress-led United Progressive Alliance (UPA) in 2009. It was catalysed by BJP infighting. Even Advani’s epithet of a ‘party with a difference’ turning into a ‘party with differences’ had become a cliché by now. “We should ask ourselves if our political career is more important than the party’s ideology,” announced Gadkari in his inaugural address. In this, and in suggesting that the BJP’s internal problems were the doing of its leaders rather than cadres, he echoed the RSS that has installed him as party chief.

Mohan Bhagwat, the RSS’s new chief, set out to stem the rot in the BJP in August last year, forcing Advani to step down as leader of the opposition and Rajnath Singh to make way for Gadkari as president. It wasn’t just the RSS that was going to adapt itself to a younger world (see ‘Sangh’s e-Sevaks’), he had signalled, the BJP too would have to change. And top downwards.

Despite its anti-Congressism, Indore shows that the BJP’s new avatar won’t hesitate in doing things the Congress way to woo a broader cross-section of the electorate. But while Congress sycophants, spurred by Rahul Gandhi’s stopovers at Dalit homes, made a mess of their night out in the villages, the BJP is proud that it institutionalised the exercise by holding its conclave in an artificial village, Kushabhau Thakre Nagar, set up on 90 acres of land outside Indore city, and forcing leaders to stay in tents. Gadkari himself paid homage at BR Ambedkar’s birthplace at Mhow a day before the conclave began, and had lunch with Dalits. “We will work for Dalit upliftment, not for votes, but as part of our political commitment,” he said at the National Executive. At the National Council meeting the next day, he made it a point to tell the media that his trip and dinner were kept secret from journalists, unlike Rahul Gandhi’s highly publicised programmes. “He (Gadkari) equated Ambedkar with Martin Luther King, who had worked for Blacks…” said BJP spokesperson and MP Ravi Shankar Prasad.

It is not just Dalits. Gadkari’s offer of a new era of Hindu-Muslim amity, expressed together with an appeal to “our Muslim brethren” asking them to cede Ayodhya’s disputed plot for a Ram temple in lieu of an alternate site for a mosque, may even have set the tone for a softer Hindutva. “We will help you with building a mosque, nearby at an appropriate place,” said the BJP president. It was a repeat of an old offer made before 6 December 1992, but the difference in undertone and reception within the saffron fold was unmistakable. The Vishwa Hindu Parishad, another RSS offshoot, went ballistic over the offer, but the BJP merely clarified that it would take others along.

The Ram Janmabhoomi movement is a thing of the past, and Indore indicated that the BJP wants the attention of the fellow the Congress calls its own: the aam aadmi, India’s fabled common man, currently sore with the UPA over soaring food prices. Inflation is thus the burning issue for the BJP now. On 21 April, it plans to beseige Parliament with agitators. The battle “will be fought on the streets”, in Gadkari’s words.

To revive the BJP internally, its president also promised RSS-style training for both cadres and leaders, setting them a goal of increasing the party’s vote base by 10 per cent. On this rousing note, he turned the podium over to other leaders. “Sushma Swaraj’s oratory is her leadership and Arun Jaitley’s an outstanding genius,” said Gadkari, heralding the duo. Advani’s replacement as Leader of Opposition in the Lok Sabha, Sushma Swaraj, announced the agitational plan on price rise. Jaitley was picked to pick holes in the UPA’s performance on internal security—both on local support for cross border terror and Naxalism—and its response to Pakistan. “The UPA Government has accepted talks with terror,” he scoffed, reiterating the BJP’s demand that Indo-Pak secretary level talks be put off. “Each step on Jammu & Kashmir goes in the direction of reducing India’s control on the state,” he warned.

It was left to Narendra Modi of Gujarat and Raman Singh of Chhattisgarh, chief ministers both, to dramatise the BJP’s stance on terror and Naxalism. “The Government at Delhi says they are talking to Pakistan because we are a mature democracy, they have never been mature enough to talk to the opposition in the same city… India’s security decisions are being taken under US pressure and for vote bank politics,” said Modi. “The Government in Delhi is always eager to protect the human rights of terrorists,” he glowered.

Raman Singh demanded a “bullet for bullet” policy on Naxals. Former BJP presidents Rajnath Singh and M Venkaiah Naidu, though, sounded out of sync with other speakers, a hint of their role in the new scheme of things, perhaps.