How cricket died for me that day 25 years ago 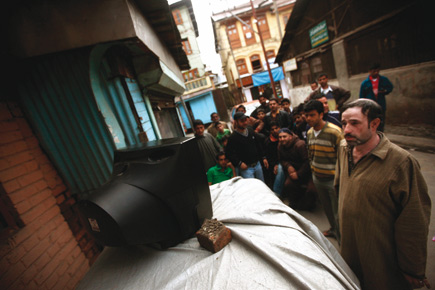 How cricket died for me that day 25 years ago


He sounded excited on the phone: “Come on over,” he said, “I want you to meet someone.” It was late at night, but this was a very dear friend, an entrepreneur and bike-racing champion. It took me an hour to our Khan Market rendezvous. In a few minutes, a car stopped in front of us, and out came Mahendra Singh Dhoni. He was accompanied by a friend, who from his puffed-up air looked like he might have been the Prime Minister’s media advisor. Dhoni looked relaxed. We shook hands and went to a café. He asked for a “light coffee” and we got talking.

The conversation veered towards cricket. “I can see you are not much of a cricket enthusiast,” he said, throwing a soft gaze at me.“Cricket died for me in April 1986…” I said. “…do you remember that match?” He smiled: “I was just five then.” As we sat there, a middle-aged woman came up to us and requested an autograph for her son. A man came by for a photo together. Dhoni obliged. Soon it was time to leave. We rose, and Dhoni and I shook hands—firmer this time.

Ravi was my cousin, my maternal uncle’s son. They lived in a house next to ours in Srinagar. He was at the university, and a sort of role model. Like him, I wanted to use Old Spice aftershave, and have a poster of Srikkanth on my cupboard. In June 1983, India won the World Cup. My memory of the day is faint, except that I was woken up by the celebrations. I was just seven and understood little of the game. But in October that year, everything changed. That was when India and West Indies came to Srinagar to play the first-ever international in the state.

The teams arrived a day before, I think, and were put up in a hotel close to the Sher-e-Kashmir Stadium. They were received with traditional fanfare. On match day, Ravi and I reached the stadium early, walking past sniffer dogs. West Indies won the toss and chose to field. Gavaskar and Srikkanth walked in to open the Indian innings.

And then it began. The stadium was nearly brought down with deafening cries of “Pakistan zindabad” as green flags—both Pakistani and the identical Jamaat-e-Islami banner—hid the overcast sky. Many in the crowd held posters of Pakistan cricketers. The West Indies team were stumped; they didn’t know why they had so much support on Indian soil. Gavaskar was caught on the 16th ball he faced at a score of 11. The Indian side crumbled in 41 overs for 176. Later, as West Indies played, the Indian fielders were booed. A half-eaten apple hit Vengsarkar in the back. India lost. Many years later, Gavaskar would confide to Rahul Dravid that the fastest he had seen anybody bowl ever was Malcolm Marshall that day in Srinagar. Kirti Azad, who hit two defiant sixes in a lost cause, recalled that day many years later: “It was like playing in Pakistan against Pakistan,” he said to me at a function.

Returning home after India’s defeat, Ravi and I did not speak a word. He tried to comfort me by treating me to a bottle of Gold Spot.

By 1986, my political education was complete. I knew what India-Pakistan matches were about. Some of it I learnt in June 1984 when Operation Blue Star was on in Amritsar. A mob attacked the Hanuman temple next to the Amira Kadal bridge and threw the idol into the Jhelum. By now, we’d started following a forced blackout on Independence Day.

So, on 18 April 1986, when India and Pakistan were playing the final of the Austral-Asia Cup in Sharjah, I bullied my grandfather to buy me crackers from Maharaj Bazaar in the heart of Srinagar. At the ground, you could see Arab ‘Sheikhs’ in the VIP enclosure throwing money in the air whenever Pakistan hit a boundary. But India managed to stay afloat against all odds.

The last over. My heart was pounding my ribcage. The last ball. Pakistan needed four to win. Javed Miandad was on strike. Chetan Sharma had the ball. I had a matchbox in my hand. Sharma bowled a low fulltoss and Miandad hit it for six. The stadium erupted. Miandad and No 11 batsman Tauseef Ahmed ran to the pavilion jubilant. My matchbox went limp with sweat. Every combustible item in the Sharjah ground was on fire.

A few seconds later, it was Diwali in the Valley. Throngs of people came out to celebrate Pakistan’s victory, and in the nippy April weather, they drank gallons of Limca to celebrate. I wrote in a memoir of the day: ‘I lay huddled in a corner of my house, ashamed, like that wealthy father in an Indian movie whose daughter had eloped with his driver.’

In less than four years, we would have to leave our home. The jeering of Indian cricketers had turned into a call for azaadi. In 1997, Ravi, who had become an academic and refused to leave Kashmir, was dragged out of his bus with two other Hindu colleagues and shot dead.

Twenty-five years after Sharjah, as India registers yet another World Cup victory, I know enough to keep away from all the jingoism. Victory or defeat in cricket means nothing to me. As I write this, people have convinced Omar Abdullah to grant land to Suresh Raina, whose family once lived in Kashmir. My father had tears in his eyes when India won. He looked at me expectantly. I couldn’t tell him that my feelings of 1986 remain. In More Die of Heartbreak, Saul Bellow called these feelings ‘first heart’.  My first heart remains close to that failed yorker bowled by Chetan Sharma.