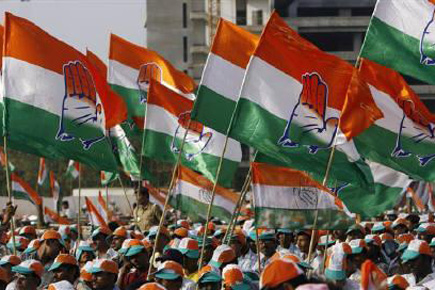 The Congress faces its toughest electoral battle since Independence. Only twice has the party displayed such electoral weakness before. The first was the post-Emergency election of 1977, when it got 154 seats in the Lok Sabha with 35.4 per cent of all votes, and the second, in 1999, when it secured its lowest tally of 114 seats with 28.3 per cent votes. But on both these occasions, expectations of its performance were higher than they are this time. Also, a few states, primarily in south India, came to the party’s rescue, allowing it to reach a three-figure tally.

There were other factors, too. In 1977, Indira Gandhi used her government machinery and extra-constitutional means to gain an edge at the hustings. In 1999, Congress cadres were enlivened by Sonia Gandhi’s entry to electoral politics. The party also enjoyed a morale boost, thanks to Assembly election victories in Delhi, Rajasthan and Madhya Pradesh. 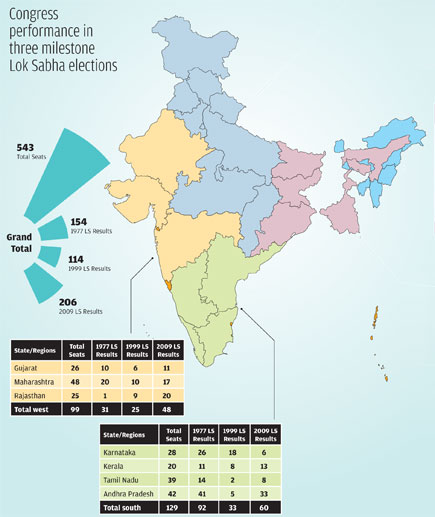 In contrast, 2014 looks bleak for the grand old party. Prime Minister Manmohan Singh, riding on a ‘Singh is King’ crest in 2009, is only a shadow of his former self. The scam- scarred United Progressive Alliance (UPA) is weighed down by a losing fight against inflation and poor implementation of its flagship populist schemes. Several key leaders of its 10-year regime have decided not to contest these polls in the face of what seem like insurmountable odds. Adding to its woes, many opinion polls predict a rout for the Congress party, suggesting that its tally may even fall below 100.

Let us analyse the party’s prospects with its performance in 1999, its worst ever in recent years, and in 2009, its best in the past two decades, as reference points.

North and central India send 166 MPs to Parliament, of which Uttar Pradesh and Uttarakhand account for 85. In 2009, the Congress won 26 seats in the region, up from 10 in 1999. If one goes by recent opinion polls and views of observers, the party will have a tough time matching its 1999 tally here. Going by the 2013 Assembly polls, the party’s tally is likely to see significant declines in Madhya Pradesh and Delhi. Reports from Haryana, Punjab, and Jammu & Kashmir suggest similar trends. In Himachal, it could hope to retain its lone seat. Indeed, the party may not be able to match its 1999 tally of 30 seats from these eight states.

In India’s eastern states, which account for 131 seats in Parilament, the Congress was not a major player even back in 2009. However, it did have some cause for cheer in Assam and Mamata Banerjee’s backing in West Bengal. This time, if minority-majority issues dominate voting patterns in Assam, the Congress may face major reverses in the state, where a local outfit called the AUDF may gain minority votes while the BJP and AGP garner a large chunk of majority votes. However, the battle for Assam is still open. In West Bengal, the Congress may find it hard to retain its six seats after its divorce with the Trinamool Congress. Similarly, in Bihar, the party’s hopes are rated as slim.

The four western states account for 101 seats in the Lok Sabha. The party is likely to do poorly in Rajasthan and Gujarat, and it faces both central and state level anti-incumbency in Maharashtra, which saw 17 of its candidates elected in 2009. Internal dissidence, wrangles with its alliance partner, the NCP, and graft issues are expected to cost the party dearly. Here too, it may not match its 1999 total of 10 MPs. The party will be hard put to win 25 seats in the western region, its 1999 tally. In 1977, the Congress had managed to bag 32 seats in these states.

South India, which sends 129 representatives to Parliament, throws up an even bigger challenge to the Congress. In 2009, the party won 60 seats from the four states here. Multiple troubles await the party in Andhra Pradesh following the Telangana crisis and emergence of the YSR Congress; it is also likely to be hit hard by anti-incumbency in Kerala, lack of an alliance in Tamil Nadu and the return of Lingayat strongman Yeddyu- rappa to the BJP in Karnataka. The Congress would be hard pressed to win even 33 seats, as it did in 1999. Recall that south India had saved the Congress from a complete national rout in 1977 by giving it 92 seats.

Devendra Kumar is a number cruncher