Tamil Nadu: The Cult of Mother is Intact

For the first time, Tamil Nadu has voted back an incumbent party contesting without an ally 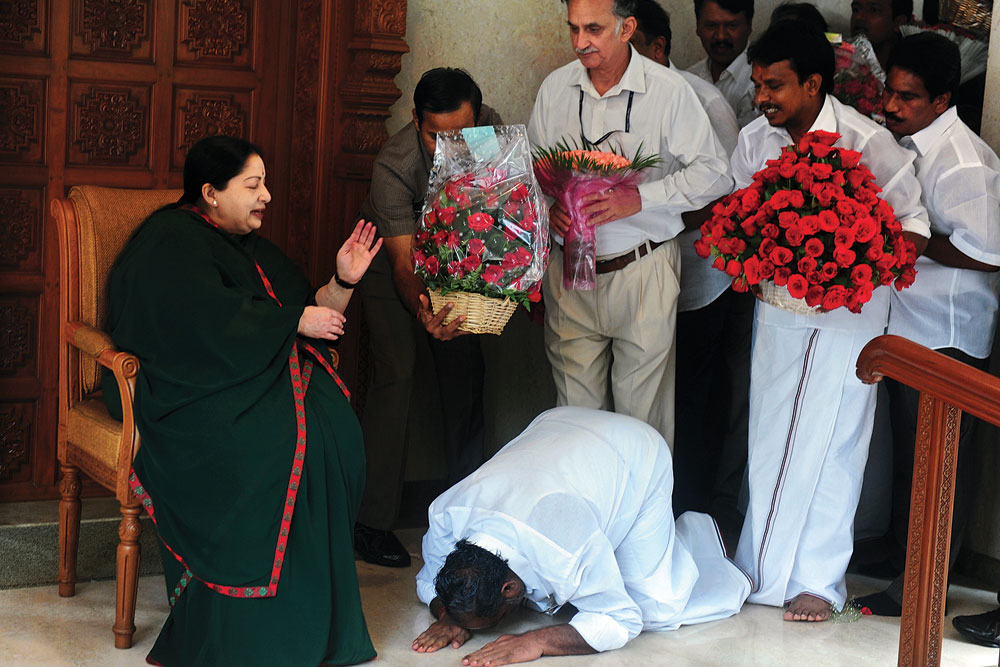 THERE ARE MANY ways to interpret the triumph of Jayalalithaa: as the death knell for anti-incumbency in Tamil Nadu, as a positive vote for India’s most ambitious welfare campaign, as the confounding act of picking one leader’s conceit over another family’s deceit. Some see it as the voice of the rural woman raising her children on a diet of government freebies. Indeed, for the first time in history, Tamil women came out to vote in larger numbers than men—21.6 million women as against 21.2 million men. Their sympathies have always lain with the charismatic MGR and after him with Amma, only this time, the mixer-grinders that have halved their workload, the free bicycles that their children ride to school and the government-sponsored mangalsutras around their necks were not easily forgotten. But equally, there are other not-so-simple lessons from this election.

The first half of Jayalalithaa’s election slogan, ‘I am by the people, I am for the people’, rang true on 19 May, as Tamil Nadu re-elected an incumbent government for the first time since 1984. Whispers of Chief Minister J Jayalalithaa possibly pulling off an MGR had been circulating for days, despite exit polls predicting a win for the DMK. Amma has in fact surpassed her mentor in many ways. If an ailing MGR returned to power in 1984 riding a pro-Congress sympathy wave, Jayalalithaa has single-handedly shrugged off charges of graft, rumours of her failing health and a grand old patriarch desperate for one last turn on the throne. Reports of her hubris have failed to depose her from her apogee. Compared to the DMK’s consistent grassroots campaign, her staged election rallies, widely criticised in the media, have been a study in the importance of not being earnest.

This is the first such win in Tamil Nadu by a single party contesting all 234 seats. The AIADMK has won over 130. (Elections to two seats—Aravakurichi and Thanjavur—have been delayed and will be held on 23 May.) The DMK-led alliance, which got less than 100 seats, took a drubbing in several of the 41 constituencies where it fielded Congress candidates. “The Congress is a millstone. So in effect, the AIADMK lead tally started not at zero, but with the 30-odd seats where the Congress contested and lost,” says AR Venkatachalapathy, a writer and a social historian.

‘Captain’ Vijayakanth—the chief ministerial candidate of the third front comprising the Desiya Murpokku Dravida Kazhagam (DMDK), the Left parties and the Tamil Maanila Congress—put up a dismal show, losing his footing in Tamil Nadu politics. That a maverick leader who once commanded a 10 per cent vote share and was seen as the third alternative should suffer such a blow is perhaps a reflection of his corroded credibility, but it also conveys a larger message. The third front has been completely wiped out—an honourable mention being Viduthalai Siruthaigal Katchi leader Thol Thirumavalavan, who lost by less than 100 votes in the reserved constituency of Kattumannarkoil. What does this mean? That the sclerosis of bipolar Dravidian politics is here to stay, until a breakthrough cure emerges. The DMK, racked by plangent cries of loss, should take heart. It can yet prove its worth as a strong opposition—it certainly has the numbers—and this is especially important with local body elections around the corner.

Ironically, Jayalalithaa, upon her return to power on yet another Dravidian mandate, doffed her hat to ‘God’ in her victory speech. Perhaps she does need God by her side. For her victory, though remarkable, has not the gravity of her sweep of the 2014 Lok Sabha polls (37/39) or her overwhelming majority in the last Assembly elections (the AIADMK front won 203/234). As recently as in 2015, she cruised to victory in the RK Nagar bypoll with a margin of 150,000 votes—the DMK boycotted the election—and this has shrunk to 39,537 now. That said, the AIADMK’s vote share in this election has inched closer to its all-time high of 44.39 per cent in the 1991 Assembly polls. With any hope, the atrocious times that followed the verdict are in the past. Now, a sobered Amma has co-opted the agenda of prohibition, albeit at the eleventh hour, to make this a virtually issueless election. Even her government’s mismanagement of the floods last year failed to make a dent in her vote share except in Chennai, where the DMK gained several seats.

Where Amma’s megalomania has established her cult for the masses weaned on hero worship, DMK patriarch M Karunanidhi’s insistence on being the chief ministerial candidate has been his undoing. While he won resoundingly from Tiruvarur with a record margin of 68,000 and secured his 13th consecutive term, his remark that MK Stalin could lead the party only in the event of his death did not sit well with young and first-time voters whom the DMK has been wooing with incessant social media campaigns. The party, while picking up many wins in southern Tamil Nadu, seemed unable to shake off Alagiri’s legacy in Madurai.

IN CONTRAST TO its neighbouring state, Puducherry voted out Chief Minister N Rangaswamy, leader of the rebel Congress faction All India NR Congress. The Congress, which had ruled the state until the 2011 Assembly elections, has reclaimed its citadel with a vengeance. The Congress-DMK coalition won a simple majority with 17 of the 30 seats. The AINRC secured eight seats and the AIADMK four. Rangaswamy, Puducherry’s longest- serving Chief Minister, was facing strong anti-incumbency. The surprise element was the defeat of Congress veteran E Valsaraj at the hands of independent V Ramachandran in Mahe.

In Tamil Nadu, the AIADMK’s sweep of the western Kongu belt, which is the hotbed of caste violence, points to its appeasement of the powerful OBC vote bank. At last count before going to press, Anbumani Ramadoss’ Pattali Makkal Katchi, which had flexed its caste muscles by venturing alone into the poll arena, was looking at just one win—not his own constituency of Pennagaram, but Pappireddipatti in Dharmapuri.

In effect, no party managed to amplify the murmurs of discontent against Jayalalithaa. All you could hear in Tamil Nadu were sappy paeans to the Mother.