The Rahul-led Congress has been on a rollercoaster that could disorient anybody else. The young leader, however, retains his smile. 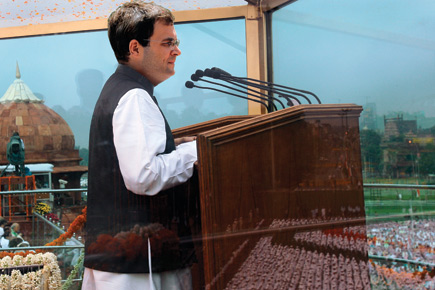 The Rahul-led Congress has been on a rollercoaster that could disorient anybody else–just not Rahul.


Just as he was slipping his shoes on, getting ready for Parliament this morning, Rahul Gandhi’s eyes fell on that five-year-old picture: of his first speech as Prime Minister from the ramparts of the Red Fort on 15 August 2014. Overcoming initial reluctance to take on the responsibility, Rahul Gandhi had charted an elaborate ten-year plan to that day, beginning in May 2004 with his election to the Lok Sabha from Amethi, Uttar Pradesh. From his individual debut win in 2004, to the Sonia Gandhi-Manmohan Singh led victory of the United Progressive Alliance (UPA) in 2009, to the Rahul Gandhi-led return of the alliance for a hat trick in 2014, the period entered the annals of Indian political history in a way that could not be spoken about without assigning a key role to Rahul Gandhi. As party strategist and change monitor, he had put the fizz back into an over-a-century-old Indian National Congress. It was a case of fast change at slow pace.

The young Gandhi remembered the promises he had made in his speech that day, 67 years after India won independence from the Raj. In the four-and-a-half years that followed, he had been able to keep quite a few, compared to regimes of the past. That the UPA came to power for a third term—led by the Congress even more firmly in the saddle with 220 seats in the Lok Sabha—was attributed partially to the lack of a credible opposition, a decimated Left and the erstwhile Bharatiya Janata Party (BJP), and in part to what the Congress propaganda machinery described as ‘Rahul magic’.

The UPA II Government under Dr Manmohan Singh had performed satisfactorily, but the added impetus—to convert it into extra seats—came from the re-emergence of the Congress as a force in the cow belt of India. That impetus was a result of Rahul Gandhi’s work on the Congress organisation at various levels since 2009, as Congress sycophants have been saying ad nauseam.

The UPA III, led by Rahul Gandhi as PM, had launched the much-hyped Migrant Protection Act and the model schools and broadband connectivity for every village programmes. Spending under the Mahatma Gandhi National Rural Employment Guarantee Act (M-Narega) scheme was up to nearly Rs 60,000 crore annually—nearly matching the farmers’ loan waiver programme of 2007-08 that the Congress had then said was the main reason for the UPA’s return to power for a second term. Though effective implementation of the Food For All objective under the National Food Security Act still remained an unfulfilled goal under UPA III, corruption and leakages in such schemes were never an election issue.

The 2014 defeat of the BJP had caused the party to formally split into several smaller fragments, with the BJP (Jaitley-Modi) and BJP (Swaraj) the only two worth mention on the national scene. If the UPA II gave the country a Telangana state, the third term of the Congress saw the creation of Bundelkhand in the first year, triggering demands for and eventually the creation of Gorkhaland, Vidarbha, Mithilanachal, Saurashtra, Harit Pradesh and Coorg. Rahul Gandhi’s pithily articulated view, drawn partly from computer spreadsheets, that smaller states are more manageable as administrative units, was shared by all the young turks in the Congress, all of whom had identical software on their laptops.

There was, of course, a party-wide consensus. For most among the older lot in the party, agreeing with the view was a ticket to continued relevance. For a few, it was an opportunity at grabbing power by forming the first governments in these newly formed states. For all that excitement, the electoral verdict of 2019 has thrown up a different reality. In the general election held in May, the Congress did indeed cross the 180 seat mark—a level described by Rajiv Gandhi in 1989 as a defeat—but could not muster the magic figures to form a government for the fourth time. In fact, not much is left of the UPA, if you take away the Congress.

In all, 27 regional outfits came together to form a loose coalition after the election results—exceeding the AB Vajpayee-led National Democratic Alliance (NDA) of 1998 in the number of constituents—imaginatively called the United People’s and Parties Alliance (UPPA). The outside support of the BJP (J-M) and Left front’s 60-odd MPs ensures that the anti-Congress UPPA can stay in power as long as it can keep its flock together.

The decline of communalism in the last ten years has eliminated the secular-versus-communal politics of earlier decades. Despite the UPA III’s belief that it had done at least as much for the aam aadmi as the previous two UPA regimes, political parties seemed aligned this time on the pro- or anti-Congress axis. The Grand Old Party’s notorious arrogance, which reached its peak with successes in the last Assembly elections in Uttar Pradesh and Bihar, was manifest in a senior leader’s comment that “India is Congress and Congress, India.”

For Rahul Gandhi, it is contemplation time. His brave attempt to take the Congress closer to its days of glory under his great grandfather Jawaharlal Nehru ought to have naturally translated into his party being every voter’s only credible choice. But differences persisted between the national leader’s vision of what his party should be for the common Indian, and the de facto attitude of the party’s local leaders.

All statistics suggest that the ‘two Indias’ are not much closer than ten years ago. Plus, greater prosperity over the last two decades and heightened aspirations have led to each voter demanding more and more in return for his vote. The formation of new states has harmed the party’s electoral prospects, with voters in the new states and old ones from which these were carved out, opting for their respective regional parties.

As the young former PM plans to lead another opposition tirade against the UPPA’s delay tactics over judicial reforms in the Lok Sabha, he tells Open: “Being Leader of the Opposition is another lesson, and I am still as keen to learn as I was when I first ventured into politics. I am not in a hurry.” The dimpled smile is intact.