Will a ploy that failed in Uttar Pradesh yield success for the Congress in Bihar? 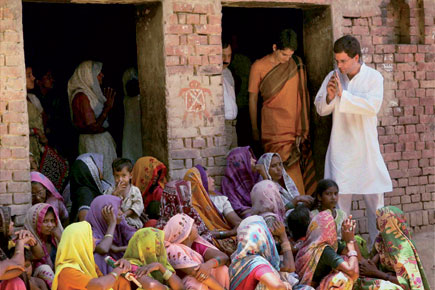 Will a ploy that failed in Uttar Pradesh yield success for the Congress in Bihar?


Can a strategy that failed in Uttar Pradesh work in Bihar? That is a grumble one hears these days at 24 Akbar Road, headquarters of the Congress party in New Delhi. The Passi card, on which Rahul Gandhi relied so heavily in UP’s 2011 Assembly polls, did not yield results. Now, as the party replays that trick—with the objective of winning Dalits back into the Congress fold—in the neighbouring state of Bihar, the big question is: will it deliver the expected results?

The question has arisen ever since Congress President Sonia Gandhi appointed Ashok Kumar Choudhary the new PCC chief of Bihar on 31 March. A 43-year-old Dalit leader from the Passi community, Choudhary replaces Mehboob Ali Qaiser, a Muslim who had resigned two-and-a-half years ago after the party’s debacle in the last assembly elections in the state. The party could not find a replacement rightaway since the state unit was wracked by factionalism, with several hopefuls lobbying hard for the post. Among them were CWC member Shakeel Ahmed, former CLP leader Ashok Ram, former PCC chiefs Anil Sharma, and Ramjatan Sinha. Former Youth Congress and NSUI President Prem Chand Mishra’s name was also doing the rounds.

Choudhary’s appointment bears Congress Vice-president Rahul Gandhi’s stamp; a former Youth Congress leader, he has been in touch with Rahul for over a year. His father Mahaveer Choudhury was a nine-term MLA, and he himself had served as a minister of Home in charge of jails in Bihar’s RJD-Congress government between 2000 and 2005.

Bihar has 22 Dalit subcastes, accounting for over 15 per cent of the state’s population. Of these subcastes, Paswans are the most numerous, accounting for almost half of Bihar’s Dalits, and constitute the core voter base of Ramvilas Paswan’s Lok Janshakti Party. The other 21 castes have been nurtured by Chief Minister Nitish Kumar of the Janata Dal-United (in alliance with the BJP), who had declared them ‘Mahadalits’—the worst off among Dalits—and announced a special package for their upliftment in an attempt to carve out a voter base of his own. At first, the CM had grouped 18 subcastes as Mahadalits, with only Paswans, Passis, Dhobis and Chamars left out, but he later expanded the list to include all except Paswan Dalits.

The new PCC chief in Bihar is not just a Dalit, but a Mahadalit, and so his appointment as the Congress’ topmost leader in the state has become quite a talking point. What, in particular, intrigues many—both inside and outside the Congress—is whether this trick of Rahul Gandhi could work in Bihar despite its failure in UP, where the Passi proportion of Dalits is higher.

Rahul Gandhi’s UP strategy, which had Dalits in clear focus, was put into action more than a year before the state’s Assembly polls of 2011. That campaign made a special effort to woo voters of the Passi subcaste and was part of a grand effort to revive the Congress in the Hindi belt and reclaim a position that it enjoyed till 1989.

Until 1989, the Congress support base in UP, and across the entire Hindi belt, was a rainbow coalition of Dalits, Brahmins and Muslims. Ahead of the last Assembly polls in UP, Rahul, in a step to regain this traditional support base, started by wooing Dalits, focusing in particular on Passis, since Jatavs–a subcaste numerically very powerful in the state—have been the mainstay of the Bahujan Samaj Party’s politics. It was with this objective, for example, that most of his highly publicised Dalit home visits were to Passi huts.

The idea was to lure away a section of Dalits, who together with a section of upper-castes, especially Brahmins, would provide enough of a vote base to draw the favour of Muslims, who are seen to operate tactically as a group to ensure their votes count against candidates they deem communal. They are anxious not to let their ballots go waste. Setting up a plausible base of votes, therefore, is a precondition for any secular formation trying to win the support of this section of the state’s electorate.

However, the UP electorate did not behave in the manner Rahul Gandhi had anticipated, and his plans were a complete failure. “But Bihar is not UP,” argues a former PCC president in the state, “[The Congress] is not entirely without hope here. The change of leadership in the state has at once opened up several options for the party in Bihar.”

Unlike UP, Bihar has no Mayawati with a monopoly on Dalit—or at least Jatav—votes, points out the Congress leader. It is true that Dalit voters in Bihar switch from party to party with far greater ease. Ramvilas Paswan can hardly boast of the support of any Dalit subcaste other than that of Paswans, and this is why Nitish Kumar could succeed in creating a Dalit niche for himself in the state. And yet, no one can claim that the state’s Mahadalit population is as loyal to Nitish Kumar as Paswans are to Ramvilas or UP’s Jatavs to Mayawati.

Equally significant from the point of view of today’s political scenario in Bihar is the precarious position of Ramvilas Paswan, who is said to be uncomfortable with his present partner, Lalu Prasad’s Rashtriya Janata Dal.

The Congress move to install an SC leader at the top of the party in Bihar may not just refurbish its credentials vis-à-vis Dalits, it would also exert simultaneous pressure on Nitish and Paswan—the two opponents vying all this while for Dalit favour in the state.

Incidentally, with this move, the Congress becomes the only major player in the state, besides Paswan’s LJP, that has appointed a Dalit as its president. While the BJP’s state president Mangal Pandey is Brahmin by caste, Vashishtha Narain Singh of the JD-U is a Thakur, while Ramchandra Purve, the RJD’s state unit president, is a Vaishya.

Many in the Congress believe that the appointment of Choudhary, a relatively unknown face in Bihar politics, is a clear indication that Rahul Gandhi is looking for a long-term solution to reverse the party’s near complete wipe-out in the state caused by the rise of Mandal-Mandir politics in the Hindi belt. Attracting Mahadalit votes, now that they have begun gaining an identity as a group in Bihar, is one way out.

Whatever the case, this decision of the Congress High Command marks a break from the politics of the past. And since the emphasis is on getting away from the Mandal era of politics and regain the party’s earlier rainbow coalition, chances are that Lalu Prasad may find it even more difficult to enter a pre-poll alliance with the Congress. This is a possibility that weakens the RJD’s chances of a revival in the state even more.

As in UP, Muslim support is essential to a Congress comeback in Bihar, and if the party succeeds in setting up a credible Dalit base, it could get that support. This would be disastrous for Lalu Prasad as well as his bête noire Nitish Kumar. But will it happen? Weren’t Congress leaders equally confident of their Passi card in Uttar Pradesh?