Pangs of a Patna Visit 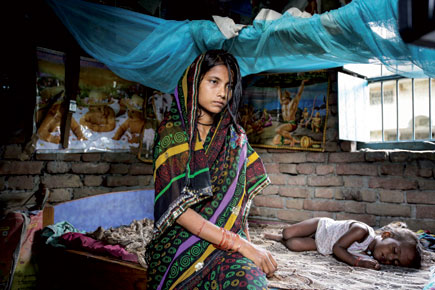 
The baby was only ten minutes old. That is what the infant’s father said to me, but it was more likely that half an hour had passed since the time he was born and rushed to the clinic because he wasn’t crying.

The clinic is new. It is located on the ground floor of the house where I grew up in Patna. My elder sister is a doctor and owns the clinic with her husband. When I first saw the baby, around nine in the morning, he already had a thin tube in his tiny nostril. This tube brought oxygen to his lungs. The child was wrapped in a soft white dhoti, but my sister, or her assistant, had covered him with puffy sheets of white cotton.

The baby was making an unearthly, prolonged, painful sound. With each breath he took, the baby was grunting, the sound too loud for a body so small. I don’t know how else to say it: the cry was that of a dying animal, and the look on the faces of the people in the room showed that it had a shattering effect on them.

I stepped out of the room and saw my sister, the doctor, standing beside the stairs; she had both hands on the railing and was leaning over it with her eyes shut.

I had come back to Patna to see my parents. They are old. I’m aware of their mortality, of course, and perhaps as a result of it, I wonder also about the days that are left to me. The question becomes poignant when it is posed in Patna. I remember how, some years ago, while I was writing a book about post-9/11 legal trials in the US, I had met Hemant Lakhani, a man convicted of selling an Igla missile to an undercover agent pretending to be from a terrorist organisation. Lakhani was an old man and his long sentence means that he will die in prison. On the day of his sentencing in a New Jersey courtroom, Lakhani pleaded with the judge, begging for leniency because, he said, everyone wants to die in their homeland. Home is where you go to die.

The greater truth, of course, is that my hometown Patna is where people die all too often, all too easily. The day I began writing this piece, children were brought to Patna dying or already dead from having eaten their pesticide-laced mid-day lunch in a village near Chhapra. A week earlier, meeting some medical sales representatives at my sister’s clinic in Patna, I had asked what diseases they were most in the market for. Antibiotics, they said, and added that people also suffered from tuberculosis and diarrhoea. One of them, Ajay Pathak, told me that even if you go to Patna Medical College and Hospital only to meet a doctor, you still have a good chance of contracting TB. He was talking about himself. A month earlier, he had also started suffering from Hepatitis E.

There were four of them, the medical salesmen, and each agreed that the worst thing about their job was seeing patients suffer because there was such an overwhelming lack of medical facilities. You have to pay a bribe to find a bed in a hospital. There are other perversions in the business. My friend Ravish Kumar, an anchor for NDTV, once told me that when he went to a pharmacy in Patna to buy medicines for his father who had fallen sick, the man behind the counter looked at the prescription and guessed the doctor’s caste correctly. The doctor had prescribed medicines made by companies owned by businessmen of the same caste. This is routine practice in Bihar. As Ravish put it, even medicines have a caste.

While I was talking to the salesmen, one of them mentioned that the lack of facilities meant that people had to travel long distances to get help. In the room adjoining the one where we were sitting, there was a couple who had come from Jharkhand. They had brought their four-year-old boy, who had not been able to urinate in three days. The problem, it turned out, was even more complicated than not getting help where they were. My sister told me that the child’s parents had first taken him to a local doctor who told them he needed to clean the boy’s genital area. That doctor inserted a catheter in the boy’s penis and this ill-advised action had hurt him. It was why he wasn’t peeing. He was given medicine while I spoke to the salesmen, and before his parents took him and left, he’d at last been able to release what my sister called “a trickle”.

But that had been the previous week. No past success could offer solace or suggest a cure for the grunting baby. His pulse, oxygen saturation and respiration were being translated into a flow of brightly coloured numbers on a monitor. A special lamp was keeping him warm, the temperature close to what he had been accustomed to inside his mother’s womb. An intravenous feed, attached to his tiny arm and secured by means of a cardboard splint, took fluids into his bloodstream. A clamp glowing red was attached to his ear. Three or four sensors were stuck to his skin, thin tubes radiating from his pink form. Every second or so, one of the machines, perhaps the one recording his pulse, beeped. The infant’s cry was louder, or more noticeable. It went on for an hour, and then more. The baby had come at nine, and at noon he was still at it. I wondered whether he’d die of sheer exhaustion. When I put the question to my sister, her reply seemed to suggest we needed to wait and see. Meanwhile, she bought a ventilator for a little over Rs 1 lakh.

It was explained to me that when a baby cries after coming out of its mother’s womb, the crying helps rid its lungs of water. This had not happened with this child. This baby, who didn’t even have a name yet, was grunting in a struggle to breathe. Hence, the tube of oxygen. Hence, too, my sister’s attempt to drain fluids from near the baby’s throat by using a vacuum machine. And assorted injected medications.

It was difficult to watch or hear the baby. His maternal grandmother, who is the mother of three daughters, stood distraught, one hand squeezing the other as if she were putting on a tight bangle. The baby’s father, a man with a broad, serious face, was sitting on a bench outside. I sat down next to him and found out that he was the manager of a local bank. He told me he was the father of two daughters. He revealed that in his upper-caste society, people were inclined to ‘indicate’ (he used the English word) if one didn’t have any male progeny. There had been cause for concern because of the baby’s gender. The mother had complained that the foetus wasn’t kicking that day and her gynaecologist had taken quick action, delivering the child about ten days prematurely. Would there have been less precipitous haste if there hadn’t been the pressure of having the family’s first male child? My sister said that the baby’s mother had two sisters, one of whom was mentally disabled; the baby’s father was the only child of his parents. By evening, the baby had settled down and was sleeping peacefully. There was still concern, but he had stepped out of danger. We were all enormously relieved; in fact, I felt giddy. I was in my hometown and I felt enough at ease to declare happily to the baby’s father—the mother was still in the hospital where she had undergone a Caesarean procedure that morning—that now my sister had earned the right to name the child. My sister laughed off the idea but I eagerly proffered the name ‘Amartya’. Over the next three days, I visited the baby’s room often. I met his mother when she arrived, in tears, to see her baby for the first time.

Your hometown is always where your roots lie, but I think it can also be about the spread of branches and, in a new season, fresh blossoms.

It would have been neat to end the tale here. But there is another story that must not go untold. There was another baby at my sister’s clinic. This baby, who was three months old and already had a name, Sneha Kumari, came from a village in East Champaran. Her sternum was foreshortened and weak, and she was having trouble breathing. She was also suffering from pneumonia, and that was my sister’s main concern. Sneha’s father and grandfather are manual labourers. She had been brought to my sister’s clinic by her grandparents and her mother; they were staying in what had formerly been our family’s garage and now been converted into a space for those who couldn’t afford the rooms inside. Sneha’s grandfather told me that he had spent Rs 50,000 on the baby’s treatment so far, going from one doctor to another near their village. This money had come from loans he had taken from rich peasants in the village: the interest on the loan was Rs 3 each month on every hundred he had borrowed. He told me he belonged to a caste that traditionally prepared oil. His daily earnings were between Rs 50 and Rs 100.

For Sneha’s family, my sister and even I were objects of suspicion and resentment. I saw it in their look. Unlike the family of the other baby, who were grateful that my sister had saved their child’s life, Sneha’s mother never stopped frowning while she spoke to me. She addressed angry questions at my sister. She knew that the system was tilted against her. In fact, it promised her annihilation. Why should I have expected the young mother to feel at home in Patna? I doubt she had any education. She was tall and slim, with a pretty face, and all she had was her anger. It shone on her face. I didn’t blame her for hating Patna, or, for that matter, for hating me.