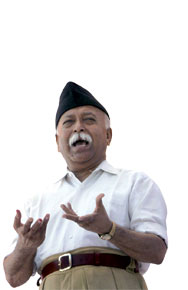 Religious intolerance of no kind can be condoned. The RSS, the mother of all Hindu nationalist bodies, is often known for its aggressive posturing, and therefore deserves blame for inciting communal passions and for its divisive ways. This is an organisation that had been banned following the assassination of Mahatma Gandhi in 1948 and also later. Yet, it is another story that it is an entity that took part in the Republic Day parade of 1963 at the invitation of none other than Gandhi’s lieutenant, Prime Minister Jawaharlal Nehru, who had praised its social work during India’s war with China a year earlier. Pro-Hindu the RSS is, just as any Christian body is pro-Christian and a Muslim forum pro-Muslim.

That said, the importance of being earnest in debates is crucial in a democracy, however flawed it remains. It is intellectual bankruptcy to slot all comments of the Hindu religious Right in the same box as, say, Yogi Adityanath’s vitriolic anti-minority outbursts. It is no sin to admit that like the bigoted bunch, India’s so-called liberals too get it wrong, and very often, especially when it comes to comparisons and accusations. The unkindest and perhaps most preposterous remark that comes to my mind is the one from that high priest of Marxism in India, the late EMS Namboodiripad, who in the 1990s compared the religiosity of Mahatma Gandhi and Maulana Azad with that of criminals like Abdul Nasser Madani, the leader of a Muslim fringe group that spawned Islamist radicalism in India’s most literate state, and a few others. Similarly, in a farcical statement, LK Advani of the BJP, whose political sensibilities were ironically shaped in the crucible of the RSS, described one of the Subcontinent’s most subversive politicians ever, Muhammad Ali Jinnah, as ‘secular’. That Jinnah ate pork or drank whisky (both considered haraam or sinful in Islam) and never read the Qur’an was enough for our liberals to brand him ‘cosmopolitan’, overlooking the man’s anguish and jealousy over Gandhi’s nearly divine status in the region that pushed him to campaign for a separate Muslim homeland, a project that was grossly mishandled by another false hero worshipped by colonial historians for the strangest of reasons, Lord Mountbatten.

Interestingly, both EMS and Advani demonstrated how severely measures taken for short-term electoral gains could distort political priorities—be it preparing the ‘ideological’ ground for cobbling an alliance with a minority group, or an effort to soften one’s image as a hardliner. The bottomline: it is fallacious to describe the RSS as the epitome of schismatic politics and in the same breath categorise the Darul Uloom Deoband as a ‘revered seat of Islamic learning’ (for all its anti-women fatwas and subversive teachings). More importantly, the spirit of debate shouldn’t be allowed to be doused by sweeping statements. In one such move that smacked of hypocrisy and nothing else, left-liberals took the side of ‘offended’ Christian organisations when RSS Sarsanghchalak Mohan Bhagwat, while praising the services offered by the likes of the late Mother Teresa, described her motive as the conversion of others to Christianity. In a vehement counter-attack, a Christian priest announced in a TV debate that his religion was superior to Hinduism. In a column on a website, the CPM’s Brinda Karat attacked Bhagwat passionately and lavished praise on Mother Teresa’s work for the destitute, the abandoned, the sick and the dying on the streets of Kolkata, as though the late missionary had only one motive: to serve the poor. Scores of others threw their weight behind those ‘hurt’ by Bhagwat’s remarks on a lady canonised by the Vatican. Delhi Chief Minister Arvind Kejriwal, who had worked with Mother Teresa at Nirmal Hriday ashram in Kolkata, tweeted asking people to ‘spare the noble soul’. A pro-Christian daily in Kerala cried, ‘Protests Mount over Bhagwat’s Remarks’.

Now, I am not very aware of the superiority of Christianity over other religions, but its supremacy since Pope Alexander VI’s papal bull, also called Inter caetera, in 1493, is unquestionable. The mandate was to strike gold and spread the word of Jesus and that of the Roman Catholic Church across the globe. Spain went west and south and Portugal east and north (later Portugal went west, too, but only to countries like Brazil). The slave trade was one of the many outcomes of that papal decree. Like those traders, most notably Vasco da Gama, who came as far as the shores of India, Mother Teresa was also an emissary of, in the words of the avowed atheist Christopher Hitchens, ‘a very determined and very politicised papacy’. That the Albanian nun, Anjezë Gonxhe Bojaxhiu, who later became Mother Teresa, ran hospices and shelters for the poorest of the poor, lepers and AIDS patients (and treated them more through prayer than medicine) was indeed noble. That she opposed abortion and favoured ‘natural family planning’ (only she would know what that was) in her Nobel acceptance speech had made her a highly controversial figure even in her own lifetime, attracting sharp criticism, mostly from leftists of the repute of Tariq Ali and Vania Del Borgo (who made a Channel 4 documentary on Mother Teresa, titled Hell’s Angel, in 1994). MT, as Hitchens referred to her in his controversial mid-90s book, The Missionary Position, making it sound like ‘empty’, had no qualms about rubbing shoulders with the world’s most despotic dictators and praising them for their support to the cause of Christianity. Ms Karat would do well to read up on MT’s anti-Marxist credentials.

It is true that Christianity in India has done a lot for the most oppressed of society, including former untouchables and the diseased whom nobody else cared for, but it makes no sense to defend the centuries-old motive of the Roman Catholic Church in disbursing funds for organisations like Missionaries of Charity, founded by MT. But our political discourse has fallen to such abysmal levels that even films named after Biblical characters and references get the thumbs-down by censor boards—a film titled Pithavum Puthranum (‘Father and Son’) is one example. Young director T Deepesh from Kerala tells me that he omitted the ‘Holy Ghost’ part from the title of his 2012 movie on nuns in fear of the Censor Board axe, but even that didn’t help. He ended up earning the tag of being an ‘anti-Christian’ filmmaker, even though the only thing he did was to highlight the plight of nuns who are often forced into the service by abject poverty. The movie is yet to get a nod from the Central Censor Board three years after it was made.

I won’t be surprised if Bhagwat isn’t aware of the extent of research and investigation that have already gone into the activities of MT, who has been accused of being a fund-raising icon for clerical nationalists in the Balkans and shady businessmen around the world. She was someone who flew down in haste to Bhopal in 1984 after the Union Carbide plant accident and asked people to “forgive”. Forgiveness for what and to whom? Did she ever say? She, without doubt, had close ties with the world’s most corrupt business tycoons and fraudsters in her lifetime. That it was Bhagwat who raised a finger of suspicion doesn’t exonerate her or lend any credence to loud screams of illogical protests, especially from the Indian Left, which is no longer iconoclastic but confused and deeply distracted. Ms Karat’s statements are proof that the anti-communist public relations machine that built MT’s reputation brick by brick has had a devastating effect on rational minds. The arrogance of the Christian priest on TV can be forgiven, but not the questioning of the rational critique by Ms Karat. Truth cannot be allowed to be a victim of spite.