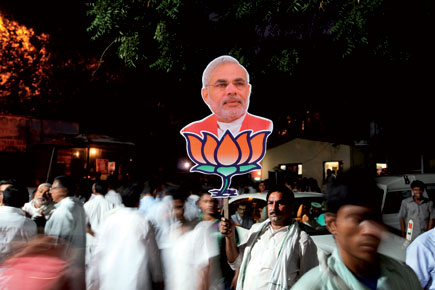 
While the BJP’s central leadership was still squabbling over its prime ministerial candidate and Narendra Modi’s name was yet to be declared, the Gujarat Chief Minister’s lieutenants were busy selecting party workers in the state who would be pressed into service in other parts of the country to convince voters that their leader is not just an icon of Hindutva but also of ‘development’. By the time the white smoke arose from the BJP headquarters in Delhi, Modi’s men in Gujarat had already drafted around 700 canvassers.

These carefully selected workers of the BJP are all from Gujarat and will be working directly under Modi, according to a state BJP leader considered close to the party’s PM-in-waiting. They are expected to carry out the necessary spadework in other parts of India before Modi goes in for his final burst of campaigning for the Lok Sabha polls due early next year, he adds. Sources in the state BJP unit say pamphlets, booklets and CDs are being put together to highlight “Gujarat as the [best] role model for development”, which would then be handed over to these party workers before they set out in different directions.

“The process of identifying party workers desirous of working outside the state began about a month back,” says Khursheed Suma, a Modi loyalist based in Rajkot. “Recently, I was told that my name was confirmed, and so were the names of nearly 30 other party workers from Rajkot. All of us have been asked to work solely on the promotion of Narendrabhai’s image as a man of development.” Besides Rajkot, other districts of Gujarat have also contributed their own groups of BJP workers to this select band “ready to do anything” for Modi.

Khursheed is the all-India convenor of the Narendra Modi Fans Club, an informal body formed in 2005 that has gained popularity in the past three years after it got the patronage of BJP Vice-president Purushottam Rupala, a close aide of Modi. The club was particularly active during the last Assembly elections in Gujarat, drumming up support for Modi in districts like Rajkot, Bhavnagar, Junagarh, Jamnagar, Surat and Vadodara.

For his new assignment, Khursheed and other selected party workers have been given a list of do’s and don’ts while they go about generating a nationwide ‘wave’ in favour of Modi. These workers, for example, are advised not to travel in cars and always use public transport instead. They have also been asked to avoid hotels and stay as far as possible at the houses of party workers wherever they go. Though most of these workers are likely to be sent to rural parts of other states, Khursheed has been asked to prepare himself for a visit to Lucknow and Varanasi in Uttar Pradesh. “Most of us would be working in villages,” he says. ‘Only a few of us, including me, would be staying in urban areas.”

According to sources in Gandhinangar, the list of workers has been sent to the BJP’s central office on Ashoka Road in New Delhi and their command for action would be issued “as soon as the [headquarters’] response comes and the pamphlets and CDs are ready”.

What is glaring in the entire exercise is Modi’s excessive reliance on the reputation and party apparatus of Gujarat, a sign of his reluctance to directly involve the BJP’s network in the rest of the country for what is sure to be a personality-centric campaign. The fact that all 700 workers belong to the state is yet another indication that he remains rather uncomfortable with—and perhaps even suspicious of—not just a section of party leaders outside Gujarat, but also of non-Gujarati cadres.

Although the BJP has declared him as its face for the upcoming General Election in spite of internal dissent over such a move, Modi himself hardly appears to have grown beyond his state as a commander of the party’s own signed-up loyalists. His behavioural pattern in that sense shows that Modi still sees himself more of the Gujarat BJP’s prime ministerial candidate than of the all-India party. This is typical of Modi. Those who know the man believe that the same mindset explains the recent appointment of Amit Shah, his close confidant and fellow Gujarati, as the BJP’s leader in charge of Uttar Pradesh, the most crucial state in Modi’s scheme of electoral victory.

That decision on Shah, taken by the central party in May this year, had surprised many both within and beyond the BJP because the electoral profiles of Gujarat and UP are not too similar. However, the Gujarat CM was keen on him to the point of insistence. For Modi, who is known to accord others only grudging trust if any at all, Shah is the perfect foil. Having played Modi’s nuts-and-bolts man in Gujarat earlier, he now has the same role in UP, and since he has no apparent ambition or appeal of his own, he poses his boss no political threat. He is simply Modi’s Man Friday.

Even for his October rally at Patna, Modi could not find anyone other than Shah to rely on to set the stage. Shah is likely to visit Patna on 21 September, purportedly to participate in a function being organised by the BJP Scheduled Caste Morcha but actually to do the groundwork and stir up interest in the proposed Modi rally to be held there.

It is not surprising that Gandhinagar, and not Delhi, is fast emerging as the operational headquarters for the BJP’s newly-anointed candidate for the country’s top post. Whether it is the control of propaganda outside Gujarat or plans for constituencies electorally significant for Modi’s ascent to power, or the technical task of whipping up an e-wave on social media, scarcely has the Gujarat CM ever shown an inclination to trust BJP functionaries in Delhi.

If Amit Shah’s appointment as the BJP’s man in charge of delivering UP to the party’s tally was significant, so is the new band of BJP workers now set for Mission Modi. According to BJP sources in Gandhinagar, though many of these party workers will visit key battle constituencies in states like Rajasthan, Bihar, Jharkhand, Maharashtra and Jammu & Kashmir, a large number of them will concentrate primarily on various pockets of Uttar Pradesh.

Khursheed Suma, for example, has been asked to carry out Modi’s propaganda work in Lucknow and Varanasi. “I have been advised to work primarily among Muslims in Uttar Pradesh,” says Khursheed. “I have to tell them that Muslims in Gujarat are happy under Modi and that they have been progressing as never before.”

It is no secret that the Sangh Parivar sees UP—which sends the Lok Sabha 80 of its 543 members—as a communal cauldron that could be stirred to the BJP’s electoral benefit. A series of Hindu-Muslim riots in the state has already created an atmosphere needed to polarise votes by religious belief. The BJP’s state unit expects that its latest exercise of selling the so-called ‘Gujarat model of development’ could also help the party gain a sizeable chunk of middle-class votes in UP and other areas of the country.

These calculations are especially significant for UP, where the BJP has for almost a decade been in complete disarray. In the 2004 and 2009 General Elections, the party won ten seats apiece, only an eighth of the state’s total. Modi’s emphasis on UP shows that he is sharply aware of the crucial role this state must play for him to have a chance of reaching Delhi, his grand aim.

In UP, observers have seen a surge in communal tension ever since Amit Shah took charge of BJP politics there. What they haven’t seen is what may be in store for the rest of India with 700 of Modi’s men on the prowl.