Two Dalits were torched alive and 18 homes gutted in Hisar, Haryana, apparently over a dog. So what really happened? 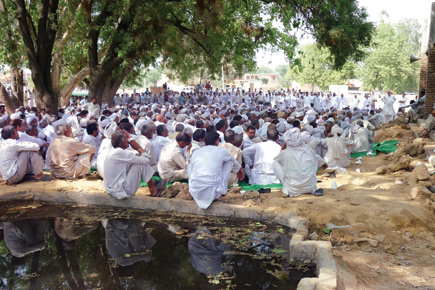 Two Dalits were torched alive and 18 homes gutted in Hisar, Haryana, apparently over a dog. So what really happened?


A perpetual war is going on every day in every village between the Hindus and the Untouchables. It does not see the light of the day —BR Ambedkar, 1943

An old Shiva temple. Massive wells with arched facades where women, colourful ghunghats pulled down, draw water. Buffaloes shimmering black in a green pond. A group of Jat men in spotless white turbans passing around a hookah whose brass glistens in the harsh April sun… it’s the kind of village where Ashutosh Gowariker would have set his Swades. Welcome to Mirchpur, a village in Haryana’s Hisar district. In this picturesque setting, on the morning of 21 April, 18 Dalit homes were torched and two Dalits—17-year old Suman and her 60-year old father Tara Chand—were burnt alive.

Let us now turn our faces away, briefly. Pinch our noses and stop breathing, briefly. The stink of two Dalits torched alive in Mirchpur will go away soon. It does not matter, really. Not when the death of a Dalit is so routine, not when there’s violence reported against a Dalit every 18 minutes, not when two Dalits are killed every day. Apathy comes easily to those who are protected from everyday violence. We have no time to waste on people who are not supposed to exist.

In Mirchpur, the official story is that a dog belonging to a Dalit, repeatedly referred to as a bitch in First Information Report No 166 filed at Narnaund police station, barks at some drunk Jat youth driving through the Balmiki colony. Rajinder Pali, son of a Jat zamindar, hurls a brick at the dog, Ruby. Yogesh, a young Dalit, objects, and an argument follows. They come to blows. Threatened with dire consequences, two Balmiki elders, Veer Bhan and Karan Singh, apologise to the Jat elders. They are beaten up badly. The Jats are baying now. The fact that the Narnaund’s Station House Officer (SHO) Vinod Kumar Kajal is close to a prominent Jat of Mirchpur, emboldens them. The stage is set for carnage.

I spoke to Ruby, and wagging her tail, she denied that she had any role to play. She cited Namdeo Dhasal’s poem, ‘Song of the Dog and the Republic’: Chained dog being dog he whines and sometimes barks/ This being his constitutional right. She even recounted a more bizarre case, reported in 2004, from Tamil Nadu’s Shanmugapuram village in Tuticorin district, where Reddiyars had issued a diktat barring Dalits from rearing male dogs since they could mate with bitches from the ‘chaste’ Hindu colonies.

The Balmikis of Mirchpur have done well for themselves. Many have small businesses, work in the neighbouring district headquarters Jind, have contracts for fishing rights in the local pond, like Karan Singh whose pet Ruby is. In the past two years, they have even won the contract for conducting the annual spring festival at the local Phoolan Devi temple attended by people from all over Haryana. It is at this festival, which began in March this year, that trouble began brewing. The local Jat youth, Balmikis say, sexually harass Balmiki women, almost as a matter of right. This happened a bit too often in the crowded temple festival, to which they objected. Ruby is right. Her barking at Jats was just the pretext.

Fearing the worst, Mirchpur’s Dalits begged for police protection. None came. On the morning of 21 April, as SHO Kajal and the local tehsildar hustled the Balmiki men to attend a compromise meeting, a mob of 300-400 Jats, men and women, encircled the Balmiki colony. They were armed with jerry cans of kerosene and petrol, agricultural implements and lathis. The SHO and the naib tehsildar apparently told the gathered Jats they would have one hour to do whatever they wished. Sounds exactly like what someone in Gujarat said in February 2002. What followed was targeted burning of 18 houses of relatively prosperous Balmikis. Before the Jat men set the homes ablaze, their women ransacked jewels, cash, clothes. Modest TV sets, DVD players, refrigerators and air-coolers lay twisted, singed by the heat. The skeletal remains of a motorbike, belonging to Amar Chauhan, brother of Suman, bears witness. A fan’s twisted blades droop eerily.

Pointing to a black water tank bobbing in the green waters of the pond, Surta, a woman whose house was reduced to cinders, says, “The first thing they did was to break the Sintex water tanks the government had provided us with, so that we couldn’t douse the fire.”

Phoolkali Devi and her husband Chander Singh had built a one-storeyed house in 1996. Chander ran a general store from his house. Everything has been gutted. Phoolkali says jewellery worth Rs 25,000 and cash of Rs 50,000 meant for their daughter’s upcoming wedding were looted. By 24 April, many among the 200 Balmiki households in Mirchpur were leaving for safer places. The few Dalits who remained told Buta Singh, chairperson of the National Commission for Scheduled Castes who was on a visit, that they no longer wished to live in the village.

In 1943, Ambedkar had strongly advocated separate settlements for Dalits. He had argued, ‘It is the close-knit association of the Untouchables with the Hindus living in the same villages which marks them out as Untouchables and which enables the Hindus to identify them as being Untouchables… The Untouchables who are as a matter of fact socially separate should be made separate geographically and territorially also, and be grouped into separate villages exclusively of Untouchables in which the distinction of the high and the low and of Touchable and Untouchable will find no place.’

Within three days of the carnage, a maha-khap panchayat of Jats was organised in the village. Representatives of 43 khaps met on the premises of the animal husbandry department. They demanded the release of the 29 Jats arrested and reinstatement of the suspended SHO. The superintendent of police and deputy collector said they were not aware of such a meeting, though it was attended by about 2,000 men within earshot. Across Haryana, there’s a war being waged on the Indian state by khap panchayats, an open defiance of law far more serious than what the country’s Maoists are attempting. Mirchpur has to be seen in the context of other Haryana milestones: the burning of Balmiki homes by Rajputs in Salwan in 2007; the Gohana carnage of 2005 (where 60 Balmiki houses were set afire); the lynching of five Dalits in Jhajjar in 2003. It’s an everyday war, as Ambedkar said.

Outside the khap, Arjun Singh, a young Jat advocate, confronts me: “Please make sure you write that the Dalits set fire to their own homes for the sake of compensation. These dheds will kill their own for the sake of money.”

I rummage the charred remains of the house where Suman was locked in. She was affected by polio, and the tricycle provided to her stands outside the now-roofless house. Suman’s crumbling English textbook is called English with a Purpose. On the last page, it says in big type, ‘Together Make it a Better World.’

Anand was part of a fact-finding team of the National Campaign on Dalit Human Rights that visited the village.