Karnataka: The Balance of Power 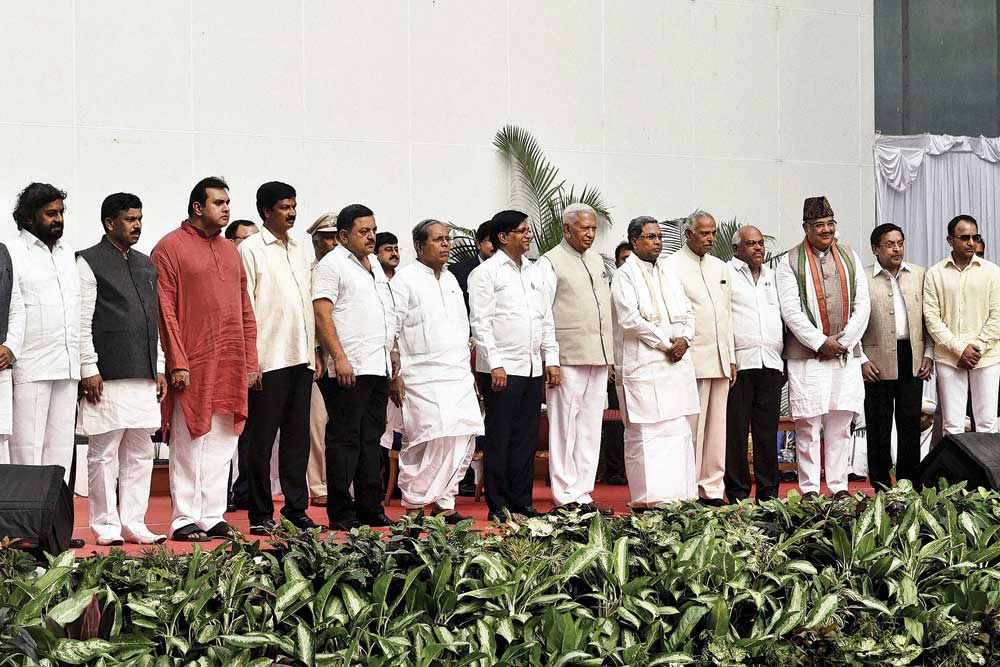 NEARLY A DECADE ago, a newly-drafted Congressman waited with bated breath through the 27 rounds of counting of votes in a keenly-contested bypoll to the Chamundeshwari Assembly constituency in Mysore. A former Janata Dal (Secular) state president, Siddaramaiah had been dismissed from the post of Deputy Chief Minister of Karnataka in the Dharam Singh-led Congress-JD(S) coalition government by HD Deve Gowda. The following months had been enervating, with HD Kumaraswamy staging a coup by allying with the BJP, presumably with his father’s backing, and Siddaramaiah being expelled from the party for attending an Ahinda (a group of minorities, backward classes and Dalits) rally. To redeem his political fortunes, the Kuruba leader resigned as MLA and sought re-election on a Congress ticket, but he had underestimated the challenge ahead. Pitted against a political novice backed by the ruling JD(S)-BJP coalition, Siddaramaiah scraped through with a margin of 257 votes in a constituency that had elected him four times before as a Janata Dal leader. The bypoll was a cathartic experience, a difficult rite of passage into a national party that he hoped would be more accommodating of his chief ministerial ambitions. It was also a taste of things to come.

Ever since taking over as Chief Minister in 2013, Siddaramaiah has had to walk the tightrope over the chasms that divide the Karnataka Congress. Speculations of his impending fall and allegations of non-performance against his government have kept the eyes of the local media and the opposition trained on him for months, but he has the safety net of a strong support base among OBCs, SCs and STs, who together account for nearly half the state’s population—something that a weakened Congress high command, desperate to hold on to power in the party’s last major state, cannot ignore. In many ways Siddaramaiah is the anti-Congressman, outspoken and relatively honest, an outsider laying claim to the inclusiveness that constantly eludes him. Indeed, his ouster would be cause for cheer not only for some of his colleagues, but also for Lingayats and Vokkaligas, dominant castes that he has alienated with his Ahinda bias. “Perhaps no leader has divided the people of Karnataka on caste lines as Siddaramaiah has,” says a senior JD(S) leader who does not want to be named. “He seemed honest and harmless, and that is why Congressmen chose him to be their Chief Minister. But to guarantee his own survival, he has become the most cunning and divisive force in the state today, dividing the government, dividing his own party, and dividing the people of Karnataka. He has always had this ruthless streak in him, even when he was with the Janata parivar.”

An atmosphere of barely suppressed rage prevails among sections of the Karnataka Congress following a major cabinet reshuffle. On 19 June, in a long-pending move, Chief Minister Siddaramaiah, acting on the advice of the party high command, sacked 40 per cent of his ministers and inducted 13 new ones, including fresh faces and old-timers who have been out of circulation for years. The idea was to get rid of non-performers, boost the government’s image, balance caste equations, and send an important message to the people with less than two years to go for the Assembly elections. But observers say it could prove to be the proverbial nail in Siddaramaiah’s political coffin. “He has dug his own grave,” says KB Ganapathy, editor of Star of Mysore, an evening paper. “He has made two big mistakes. One, he did not extend his colleagues the courtesy of prior discussion or notification before issuing the pink slip. And two, he succumbed to the lobby of a few senior Congressmen like Mallikarjun Kharge [the Dalit strongman who was a co-contender for chief ministership in 2013] and inducted their sons and relatives as ministers, choosing them over other experienced candidates.” The Congress, says the seasoned political observer, should have taken the long-term view and dealt with anti-incumbency instead of just balancing egos for the time being.

THE RESHUFFLE HAS bruised more than a few egos. Senior leaders like V Srinivasa Prasad and Qamarul Islam have openly expressed anger at being let go of; actor-turned-politician MH Ambareesh, a magnet for the Vokkaliga vote in politically-important Mandya, has resigned from his Assembly seat and is being actively wooed by the opposition; yet others who feel cheated out of a ministerial berth are plotting their next move. “Internal conflicts arise even in neighbourhood Rotary Clubs. The reshuffle was a political decision, taken with consideration to the impending elections. What we want to focus on is the government’s image. Its achievements, unfortunately, have not got much publicity, but this will change now,” says Santhosh Lad, one of the newly-inducted cabinet ministers and a mining baron from Bellary. Lad, at 40, is several years older than Siddaramaiah’s youngest recruit, Priyank Kharge.

The last time a chief minister of Karnataka attempted such an overhaul was 30 years ago. To rebuild the image of the scandal- ridden Janata Party government, Chief Minister Ramakrishna Hegde shunted out 17 of his ministers in 1986, only to trigger a bout of dissent within the party. The reshuffle was also criticised on the grounds that Hegde had taken the easy way out by sacking junior ministers while retaining most of his cabinet colleagues. RV Deshpande, who is now a senior Congress leader and Industries and Tourism Minister in the Siddaramaiah government, was among those shown the door. “I was just a year into my term and I asked him, ‘Why are you removing young ministers?’ He said, ‘You people are the future of the party. You should work on building it and strengthening it at the grassroots level’,” Deshpande says. Siddaramaiah’s reshuffle has done just the opposite, undermining many senior leaders who command a considerable following and lowering morale among party workers. “The 2018 elections are crucial for the Congress,” Deshpande says. “The biggest problem is that we don’t have dedicated cadre. They are not well- trained. The link between government and party workers is missing,” he says, adding that the party should take a stand on “how to move forward with the present political situation in mind”. “We cannot afford to antagonise everyone,” he says. “In the end, secular forces should triumph.”

He is referring to the particularly toxic row between the Congress and the JD(S) over an alleged ‘buying’ of votes in the just- concluded elections to the Rajya Sabha. The Congress is accused of prevailing on some JD(S) legislators to vote for KC Ramamurthy, whom it had fielded against the JD(S) candidate, businessman BM Farooq. Cross voting by eight JD(S) MLAs resulted in a humiliating defeat for the party, which has since suspended the rebels. Some of them also cross-voted in the elections to the Legislative Council, ensuring the defeat of JD(S) candidate SM Venkatapathi while the BJP’s second candidate Lehar Singh Siroya walked away victorious. Even as some JD(S) leaders have been observed sidling up to the Congress, the BJP may yet snatch away others from its flagging ranks. “There is no future for the JD(S) and many party leaders are realising that. We will welcome whoever wants to join us. In 2018, it will be a direct fight against the Congress. And the shape they are in, we should win comfortably,” says Jagadish Shettar, leader of the opposition in the Legislative Assembly. The JD(S) and the BJP, with 40 MLAs each, were equally matched in the Assembly before the Rajya Sabha poll debacle.

If the Congress loses ground, it will be to the BJP’s gain. The BJP has resolved to set aside its differences and has reunited under Lingayat strongman and former Chief Minister BS Yeddyurappa’s leadership. The neurosis of caste and religion still plague the state and Lingayats are the single largest community, commanding the support of powerful godmen and mutts known to pull political strings. “We learned our lesson after the Congress came to power because of the split among us,” says Shettar, who had fallen out with Yeddyurappa during the party’s tumultuous term in power between 2008 and 2013. Yeddyurappa had to step down as Chief Minister and spend several days in jail in 2011 following graft cases filed against him by the Lokayukta, the Karnataka ombudsman. His party, anxious to leave the past behind, is now playing up Prime Minister Narendra Modi’s development card, while highlighting the failures of the Siddaramaiah government.

Fortunately for the BJP, the Chief Minister is an easy target. Kumaraswamy took a shot at his honest tag by pointing out his Rs 70 lakh Hublot watch. His three years in office have been marked by a worrying spike in farmer suicides, a lack of political will to improve infrastructure in Bengaluru, and a sense of unease with the way his government has tackled sensitive issues like workers’ demand for higher wages and attacks against rationalists. A self-proclaimed atheist, he has even failed to enact a law against superstition that would outlaw several casteist and discriminatory practices in the state. “His first lacuna is that he is not a committed party man. Even with a reshuffle, he cannot get things done because his own ministers don’t see eye to eye with him,” Shettar says.

A day before Siddaramaiah wielded his axe, the state BJP leadership met at Woodlands Hotel in central Bengaluru, a hallowed and ‘lucky’ venue for political meetings, to discuss the way forward. Senior leaders Ananth Kumar, DV Sadanand Gowda, Jagadish Shettar, Shobha Karandlaje and others pledged allegiance to Yeddyurappa, who quoted AB Vajpayee’s famous refrain, ‘andhera chhatega, suraj niklega, kamal khilega’ (darkness will lift, the sun will rise, the lotus will bloom). “All eyes are on Karnataka now. The mood is changing across the state. People are fed up of the Congress’ ‘guest appearance’ leaders, its leaders on vacation, their lack of stability,” said Murlidhar Rao, party general secretary, at the meeting. “Our leadership is stable. We must establish a light post in south India and become a model state for Modiji’s dream of a Congress-mukt Bharat.”

Stability is a tall order in Karnataka, a state forever swept up in the turbulence of democracy. In 64 years, it has witnessed 29 chief ministerial churns. A change of leadership is seen as an essential tool with which to extinguish any political pyrotechnics. Among the Congress’ follies today, says a senior Karnataka party leader, is not having the courage to break the glass in time. “If Rahul Gandhi was more like his father, who had the power to summarily dismiss chief ministers Veerendra Patil and Bangarappa within a couple of years, we would not have a problem today,” he says. Will Siddaramaiah last his term, like few have before him? “He is a man with an open heart and he has tried his best to gel with the rest of the party. I hope, for his own sake, that he adopts a consultative mode of working with the new ministers,” says Deshpande, who has worked with seven chief ministers. It is rarely a knockout punch that fells a chief minister. Angsty party men, opposition pugilists and the ogre of corruption strike repeatedly, debilitating the man until he gives up. To his credit, Siddaramaiah, even when pushed up against the ropes, seems to roll with the punches; 2018 may yet prove to be one hell of a fight.