Hunting Down Naxals; BJP's Invisibility Cloak; Tweet Like Tharoor; MA in Karunanidhi-giri; and Losing the Race on Caste 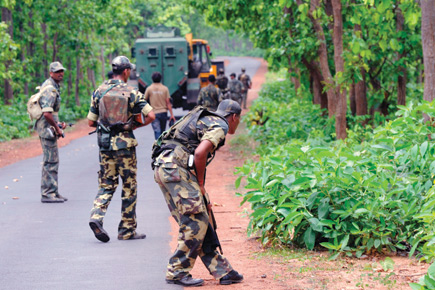 Hunting down Naxals; BJP’s invisibility cloak; Tweet Like Tharoor; MA in Karunanidhi-giri; and Losing the race on caste


Hunting Down Naxals Without Losing Votes

With the Government gearing up for a major offensive against Maoists, the Congress, the leading component of the rul­ing UPA, is waking up to the political cost it might have to bear, particularly among tri­bals. Only recently, Congress General Secretary Rahul Gandhi completed a success­ful tour of Jharkhand, where he was seen making a special effort to win over the tribals.

The dichotomy has led the party to wash its hands off the Centre’s position that Naxalism is a law and order problem. “No doubt, it has to be tackled, but it is not a law and order problem alone. Governance in Naxal-affected states is poor. There is no con­nect between government and people. The delivery mecha­nism has collapsed,” says AICC General Secretary Digvijay Singh. He, however, denies there are differences between the Government and the par­ty. “The Government has right­ly said it is prepared to talk to Naxals, but they have to lay down their arms,” he says. But the growing distance between the two is obvious.

A similar difference of opin­ion is threatening the Left par­ties as well. While the CPM, following the loss of face in West Bengal due to Lalgarh, has turned more loyal to the UPA Government than even the Congress, the CPI has struck a discordant note on the offensive against Maoists. West Bengal CM Buddhadeb Bhattacharjee has even sug­gested to Home Minister P Chidambaram that there should be joint operations in Bengal and Jharkhand.

CPI General Secretary AB Bardhan, however, has de­nounced talk of the Army’s in­volvement in anti-Naxal op­erations, saying, “Maoists are not terrorists.” The CPI has re­peatedly demanded in the past that the Government disband Salwa Judum, an anti-Nax­al vigilante force set up by the Chhattisgarh government.
In the absence of politi­cal consensus, and with the Congress developing cold feet, the Government may not find it easy to go ahead with its of­fensive despite the massive build-up of security person­nel in Maoist-dense areas.

Twice bitten, once shy, isn’t exactly how the saying goes, but it does hold good for the BJP right now. Considering the kind of embarrassment its major meetings since the Lok Sabha results have thrown up, the party has put off the meeting of its national executive scheduled for later this month, over 28-29 October. For the record, BJP President Rajnath Singh says it is being done because of the festive season. And also because most of the leaders are in their constituencies. But the buzz within the party is that holding the meet less than a week after the results of the Assembly elections of Maharashtra, Haryana and Arunachal Pradesh come out wouldn’t be such a good idea. The party considers itself a serious challenger to the ruling Congress-NCP combine in Maharashtra, but isn’t claiming it is going to win. As for the other two states, it is not even in the reckoning.

Shashi Tharoor’s defenders complained that his ‘cattle class’ comment was made in good humour. It’s now Tharoor’s turn to be at the receiving end of good humour. Twitter users are now imitating his tweeting style, posting tweets with the tag, ‘TweetLikeShashiTharoor’. Some samples:

@vadakkoodan What did @ShashiTharoor respectfully decline to begin with? Does anyone have the link to that tweet?

A model for UP Chief Minister Mayawati to emulate. The University of Madras is all set to launch a Master of Arts (MA) course in Kalaignar Thoughts, from next year. In Tamil, Kalaignar means scholar and here, it’s none other than CM Kalaignar Muthuvel Karunanidhi. This may be the first time a state university is starting a course based on the ideals, perspectives and philosophies of a serving CM. Classes will be held both in English and Tamil, with the option of correspondence studies.

Critics are already calling it a clear case of subversion of public institutions for sycophancy. But the newly-appointed Vice Chancellor G Thiruvasagam is not ready to relent. And in starting the course, he won’t bother with guidelines. The academic council or any other university body was convened to discuss the proposal.
Research scholars across the country are doing dissertations on the thoughts and actions of chief ministers of yore. But the academic community hasn’t found any other course on the philosophy of a living leader.
Thiruvasagam has started two other similar MA courses. The first one is on the thoughts of legendary Dravida leader Periyar EV Ramaswamy and the second on DMK founder and Karunanidhi’s mentor CN Annadurai. This is the birth centenary of Annadurai, a highly popular chief minister with a scholarly bent of mind.  And Periyar, the great rationalist and reformer, conceived Dravida ideology.

It was only last week that public protests forced the ruling DMK government to drop the plan to name a bus stand in Thirunelveli district after Karunanidhi’s parents. But the party succeeded in installing statues of his father and mother at the same bus stand.  There’s also a Chennai suburb called Kalaignar Kanrunanidhi Nagar.

AIADMK leader J Jayalalithaa is no laggard either: she renamed a place in Chennai as Puratchi Thalaivi Jayalithaa Nagar when she was CM. She was also the first CM to start a transport corporation in her name.  She has been mellow in her criticism of the course. Perhaps she is dreaming of a similar course to immortalise herself.

Losing the Race on Caste

The same year, a landmark study by Ghanshyam Shah and others surveyed 560 villages in 11 states and found that though extreme forms of untouchability have declined, it’s still practised in 80 per cent of villages. Worse, it found untouchability even in state institutions. To mark the 20th anniversary of the enactment of the SC-ST Prevention of Atrocities Act recently, the Prime Minister too expressed concern about the low conviction rates under the Act.

So we must celebrate the UN Human Rights Council’s decision. If the resolution is adopted, in the next report India has to submit to the CERD panel in 2010, India won’t be able to pretend caste discrimination does not exist.