“I will break the Delhi cabal of status quoists”

Just before setting out from his Gandhinagar residence for a whirlwind tour of eastern UP, BJP’s prime ministerial candidate spoke to our Managing Editor. Excerpts 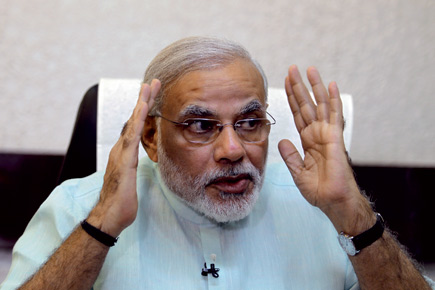 Just before setting out from his Gandhinagar residence for a whirlwind tour of eastern UP, BJP’s prime ministerial candidate spoke to our Managing Editor. Excerpts

Your party has maintained that its election campaign was run on the plank of good governance. How do you propose to put a new governance paradigm in place?
In all my campaign meetings, I have been emphasising the need for good governance. I believe in minimum government and maximum governance. The country is facing trouble on all fronts because of maximum government. It is interfering with every aspect of life; it is not for changing the lives of people, but to benefit a few rent seekers who think it is their God- ordained right to rule.

The problems are very similar to what could happen to your computer or iPad. You may have the best machine and best information on its hard disk, but if a virus gets in, it will just collapse. The governance machine in Delhi has collapsed due to the unwholesome acts of those in charge of government.

My idea of governance is a ‘P2G2’ formula— pro-people proactive good governance. In this, those in charge of governance are not fire-fighters as you see in Delhi. We will formulate and guide policies in a transparent manner for the larger public good.

Industry and investors have a lot of expectations of the next government. How do you soothe the frayed nerves of investors?
A stable government and stability in policy will drive investment and boost investor confidence. You don’t have to go only by Modi’s speeches. I have a track record to substantiate what I say. There will be no place for vacillation or ad-hocism.

What should be the new government’s priorities?
To be in charge. Currently, no one is in charge. I have been saying that the country needs a chowkidar in Delhi—to prevent the loot of public wealth.

On the policy front, we will follow what we do in Gujarat. Every policy draft will be put in the public domain; it will be online. We will elicit the views of people. And there will be genuine people participation in policy formulation.

How do you see the political landscape after 16 May? And how…
(Interrupts) Why 16 May? Can’t you see it now? That the Government in Delhi and the party in power have already been rejected by the [country]? The large crowds that attend my rallies demonstrate that a new dispensation is going to be in charge soon.

Will you be able to satisfy people’s growing aspirations?
The new government will work towards addressing the demands of a fast- changing India. The Congress will end up with its worst-ever tally. The country is fed up with the family that sees power at the Centre as their entitlement. I saw the anger of the people first-hand in Amethi. That’s why I said that they will not elect someone who has not spoken a word about the problems of the constituency in the past 10 years in the Lok Sabha. Rahul Gandhi is finding the going tough in his own constituency. India has rejected family rule.

What does that mean for the Congress?
Every recent election has shown that the family no longer has [its earlier] vote-catching ability. I see the Congress experiencing a major crisis after the election. There could be doubts about the ability of its leadership to lead the organisation.

How will a Modi government be different from any other regime?
I fear only the Constitution. Every decision will be taken within the four walls of that sacred book. That was just not happening in Delhi. Every leader and every minister was cutting corners. Many had their hands in the till. And the regime as a whole was subverting institutions. They reduced even constitutional bodies and investigating agencies to their handmaidens.

You admirers say that this is the ‘revenge of an outsider’…
I have humble roots. I was born in a poor family. Now I am the Chief Minister of a prosperous state in India, but my mother takes an auto-rickshaw to the polling booth on the day of voting. There are no hangers-on or durbaris.

Look at what’s happening in the Capital; Delhi is being controlled by a cabal that has vested interests in the status quo. I will break the status quo. That must be making them uncomfortable and prompting them to level unsubstantiated charges against me.

What will be the focus of your foreign policy? Will the new government look East or look West?
I will look at India. What is in her self- interest will be India’s foreign policy.

What are your plans for Varanasi?
It is the call of Ma Ganga that brought me to Varanasi. My first priority will be the cleaning up of the Ganga.