Beyond the magic figure of 7.6 lies the bigger challenge for the Modi Government 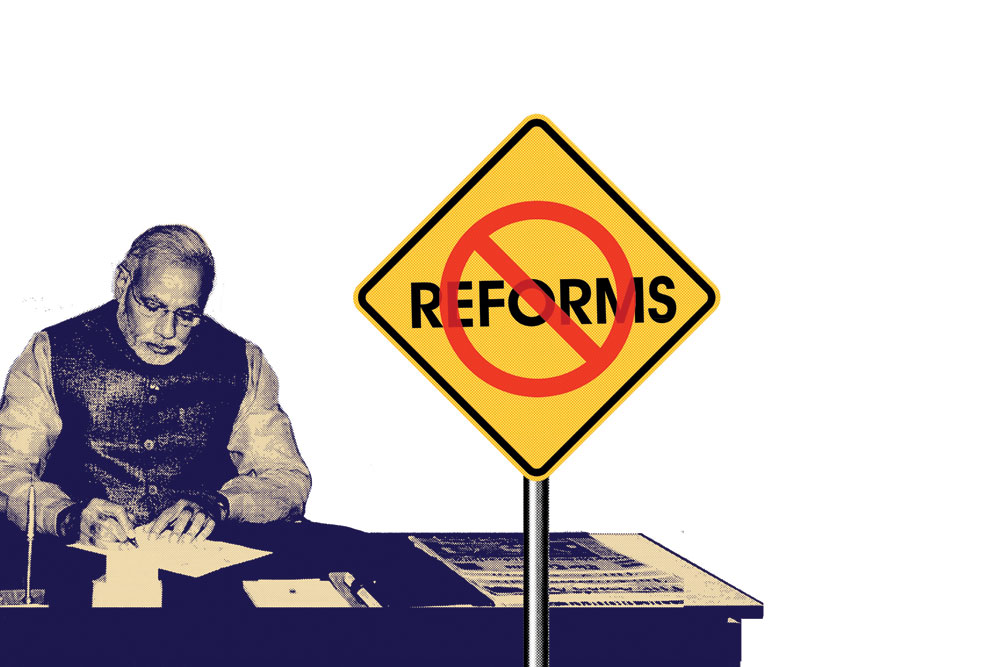 IN MID-2013, roughly a year before the General Election, India was caught in a mood of despondency. It was the third straight year of sub-7 per cent economic growth and the world had ‘given up’ on the country. The expression ‘India fatigue’ had gained currency among foreign investors. More crucially, at home, businesses and consumers alike displayed a degree of pessimism that had not been seen in a long while. This could be seen from wild gyrations of the index commonly used to assess consumer sentiment, the Current Situation Index (CSI) compiled by the Reserve Bank of India (RBI). By September of that year, the CSI tanked below 90, an indication of deep pessimism.

Three years on, all that has changed. On 31 May this year, when the economic growth numbers for 2015-16 were released, India’s status as one of the fastest growing major economies of the world was confirmed. At 7.6 per cent for the year ended 31 March 2016, India is ahead of China and on top of the BRICS league table that includes Brazil, Russia and South Africa as well. So, is India on its way back to the heady days of 2006-07 when economic growth was near the double-digit mark? Is the so-called ‘India story’ back?

Well, not quite. Beyond the 7.6 per cent figure lies a sombre reality. One way to understand the growth number is to consider the economy as a plane flying on two big engines, consumption and investment. Ideally, for a smooth flight, both engines should purr at the same speed. But in 2015-16, the key measure of consumption (private final consumption expenditure) grew by 7.4 per cent while the measure of investment (gross fixed capital formation) grew by only 3.9 per cent. This is sclerotic compared with the number for 2014-15—the previous year—when it rose by 4.9 per cent. This is akin to one engine firing away at top speed while the other one sputters.

This is a situation reminiscent of the later years of the UPA regime, when a similar situation prevailed. At that time, there were serious imbalances in the Indian economy. Due to this mismatch between consumption and investment, broadly, inflation flared up and ultimately the RBI had to raise interest rates to cool down prices.

Can such a situation emerge again? “There is always a danger that a consumption- driven demand-side boom may lead to the building up of inflationary pressures in the economy,” says Vivek Dehejia, a professor of Economics at Carleton University in Ottawa, Canada, and a senior fellow in political economy at IDFC Institute, a think- tank in Mumbai.

Data suggest that consumer confidence is at a low. The CSI, which revived rapidly after Narendra Modi became Prime Minister on 26 May 2014, peaked sometime in March 2015 when it touched 124.2, and thereafter tapered off, exhibiting a loss of confidence. In March 2016—the latest period for which survey data is available from RBI—the CSI stood at 122.2, lower than its peak last year.

Data suggest that consumer confidence is at a low. The CSI, which revived after Modi became Prime Minister, peaked in March 2015, and then tapered off

Business confidence is low, too. The RBI conducts a quarterly ‘Industrial Outlook Survey’ that provides an assessment of the business situation of Indian manufacturers. Its Business Expectations Index (BEI), which is a useful metric for the confidence of companies, paints a sobering picture for the first quarter of 2016-17. After peaking in September 2014, the index has fallen to its lowest level in the last two years.

WHAT WENT WRONG? Did the Narendra Modi Government not pursue economic reforms with the requisite determination?

“You cannot argue that reforms were not undertaken by this government,” argues a portfolio manager with a well-known Foreign Institutional Investor (FII) who does not wish to be named. “The BJP underestimated the extent of the problem,” he adds, “They thought there were plenty of low-hanging fruits that could yield high returns. What they did not anticipate was that the world we live in today is fundamentally different from the one that existed before the global economic crisis of 2008. Before that, a country could always export itself to prosperity. That is no longer possible and ‘export weakness’ is a fact of life.” He highlights the banking sector crisis as an example of that underestimation. “The Government took too long to recognise the Non-Performing Loans (NPL) problem. It thought that a few quick fixes could solve it. For example, at one time, it was thought that growth had slowed down due to slow environmental and other clearances. The steel sector shows this thinking was wrong. The clearances have come, but many of the projects are no longer viable.”

To be fair, the Government has understood the gravity of the situation. On 28 May, it notified the Insolvency and Bankruptcy Code, a major financial sector reform that will allow the resolution of bad debt. This promises to revive private sector investment in the years ahead. “This is a positive step. But the question is, who will bell the cat?” asks the FII portfolio manager, adding that, “The decision on how much of the debt has to be written off—or the ‘haircut’ to be imposed on the banks—has to be decided by boards of the affected banks. But they are unlikely to do so quickly for various reasons.”

Of late, however, another narrative has begun to slowly dominate: that the BJP Government has simply not undertaken the ‘big bang’ structural reforms that are necessary to put India back on the track of high growth. The Prime Minister was asked this question by The Wall Street Journal in a recent interview. He answered that, “…When I came to the government, I used to sit down with all the experts and ask them to define for me what is the ‘big bang’ for them. What are the reforms that they think would be categorized as ‘big bang’? I am sorry to say, but nobody could tell me clearly what was the ‘big bang’ that they were looking for.”

One way to understand the growth number is to consider the economy as a plane flying on two big engines, consumption and investment. Ideally, for a smooth flight, both engines should purr at the same speed

If one leaves aside the semantics of what constitutes ‘big bang’, there are reforms such as the undoing of the disastrous 2013 Land Acquisition law that has now been thrown in the court of state governments which are expected to tailor laws to their own requirements. Here—as in most contentious policy issues—opinion is divided.

“If you have a democracy and you have a large poor population, then for a bulk of this population, some idea of redistribution remains attractive. It is important to point out that conservative economics is unlikely to succeed in a poor democracy and is only possible in non-democracies,” argues Dehejia. “If your core [support] base is around 15- 20 per cent of the country’s population,” he adds, “you still need to attract another 10 per cent or more, and hence it is attractive to move in policy terms to a more centrist position.”

It is hard to escape the big truth of competitive democracy, and especially one as fiercely contested as India’s: economic decisions, in the final analysis, are subservient to the logic of politics

As an example, Dehejia cites the poor performance of the BJP-led NDA coalition in the 2004 Parliamentary polls. “The poor result was not due to the ‘India Shining’ campaign, but due to the perception—whether right or wrong—that the alliance was not pro-poor. The lesson has been learnt. Modi is pragmatic. Why would he do what he knows will hurt him?” he asks. “You can abolish the National Rural Employment Guarantee Act and carry out aggressive privatisation. Optically, this may look good. But what will you gain politically?”

A very different answer is given by V Anantha Nageswaran, an independent financial markets consultant based in Singapore, when asked about the risks that confront the Indian economy. Among the three major ones he cites—heightened expectations (of consumers and businesses), an inability to take India onto a higher growth path, and macroeconomic instability— he rates the last of these as the worst. “Suppose the monsoon is either not satisfactory or satisfactory in the aggregate but spatially and longitudinally unevenly distributed, leading to a rise in food inflation, then there is an inflation worry in the second half. This will be on top of the oil price base effect. The US Federal Reserve will be raising rates and if there is emerging markets turmoil with China at the centre of it, India would not be exempt from it,” he says.

While ranking the danger of low growth below that of macroeconomic instability, Nageswaran adds that, “It is not clear to me that there is an adequate grasp of the challenges of achieving sustainably high growth with the above combination of factors— internal and external.”

That has an echo in what the FII portfolio manager says: “The Plan A (of the Government) probably was to secure a low interest rate after an initial period of stabilisation. That did not happen as the RBI stuck to its own wisdom. They had no Plan B. But finally, after tinkering for a while, the Government has realised that you need a fiscal policy that is not cast in stone. They are looking for a solution and the [NK Singh] Committee taking a look at the Fiscal Responsibility and Budget Management (FRBM) Act is probably one answer to the problem.”

IT IS HARD TO escape the big truth of competitive democracy, and especially one as fiercely contested as India’s: economic decisions, in the final analysis, are subservient to the logic of politics.

“The reality is that in the absence of a crisis, it is hard to imagine ‘big bang’ reforms,” argues Dehejia. “Only in the time of crisis are the normal laws of politics suspended.”

Will India require another crisis to push through tough economic reforms? Let us not forget that a 7.6 per cent growth rate is the stuff of dreams for most countries today, and India’s achievement is thus formidable. The fear stems from macroeconomic imbalances, for which India is notorious—inflation, balance of payments trouble and unsustainable fiscal deficits. One can ignore their likelihood only at one’s peril. There is plenty of evidence that these dangers have not abated.