Discord in the House of Nehru 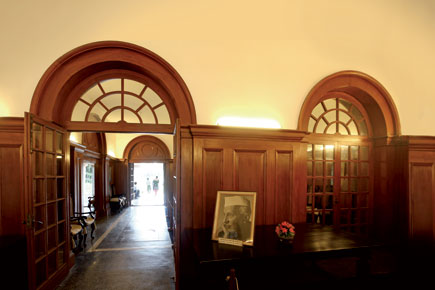 The entrance to his office is guarded by a young sentry, a research student who stands patiently with a clipboard and politely turns away the slow trickle of visitors. It is Friday afternoon, a day after his resignation as director of the Nehru Memorial Museum and Library has sparked off a babble of ‘culture wars’, and Mahesh Rangarajan is expectedly keeping a low profile. But, this is not a man who believes in closed doors. Through his four-year tenure, staff, students, researchers, academics and members of public who converge at the NMML, would unanimously attest to his cordiality and accessibility.

In a few minutes, a group spills out of the seminar room located next to the office. They assemble at a table laid out for tea, all the while discussing the subject of the seminar, the making of Indian foreign policy and the disparate approaches of Nehru and Gandhi. Soon, the door to the office opens and Rangarajan walks out. A tall man with a self-assured stride, his shirt sleeves casually rolled up, he winds his way through the crowd, making it a point to interact with every person on the floor.

“I have declined any and all comment to the media so far. But please stay and have some tea,” he says before withdrawing to his office, where some staff members have collected to bid him farewell.

There is a popular theory backed by some scholars that Indian institutions can work well only for short periods of time. If that is the case, then the storm over the Nehru Memorial Museum and Library becomes less cataclysmic, and more cyclic in nature. After all, the institution has had an exceptional four years under the stewardship of Rangarajan. This was preceded by a controversial bout under the previous director, Mridula Mukherjee, accused of blatant partisanship. Is it time then for the institutional curse to strike again? Depending on who Rangarajan’s successor is, the NMML may yet buck the trend.

Rangarajan, a journalist-turned-academic known for his contributions to environmental history and analysis of Indian elections, had been in charge of NMML since 2011, but his appointment was deemed “illegal and unethical” by Culture Minister Mahesh Sharma in the second week of September. The outgoing UPA had given the director permanent tenure in May 2014, despite the model code of conduct prohibiting such an appointment during the election process. Soon after the minister’s comments, Rangarajan resigned from his post, citing personal reasons. It was the second time he’d resigned in the same week, after the executive council of the NMML refused to accept his resignation the first time.

The director’s resignation was a culmination of events that began with an announcement by the Culture Minister to revamp 39 state-backed organisations, including Gandhi Smriti, Lalit Kala Akademi and the NMML, ‘to ensure their smooth functioning and make them more purposeful… Apart from ensuring that these institutions carry on with the purpose they were established for, we will also present modern India’. The Congress party’s reaction was to be affronted on Nehru’s behalf. It dubbed the move ‘an attempt by the BJP, the RSS and Narendra Modi to diminish and downplay’ the legacy of Nehru. The very next day, on 3 September, an official statement was issued by the NMML which said that as part of the Government’s plans to celebrate the 125th birth anniversary of Nehru, there would be closer focus on him and the ‘governance of India under Jawaharlal Nehru… which has been largely left out in the present exhibition’. Despite the clarification, at a Congress Working Committee meeting almost a week later, Sonia Gandhi accused the Centre of rewriting history and targeting Nehru unfairly. The NMML was soon a political football, kicked from both sides, as a war of words ensued. It finally led to the ouster of Rangarajan, who lost out despite his goodwill with both sides, as the BJP sought to have the last word by underlining the irregularities committed by the Congress in flouting Election Commission guidelines.

The Government-funded NMML, housed at Teen Murti Bhavan in New Delhi, has three main divisions: the planetarium, the library and the museum. So far, there seems no evidence for the charges made by the Congress. The changes have been proposed only in the museum area, and none in the library. On the NMML website, a detailed new design plan for the museum has been uploaded. It settles the question of the revamp diluting Nehru’s identity, as it is indubitably focused on Nehru, his personal life, his relationships with contemporaries, and the making of modern India. The plan has been proposed by journalist, Rajya Sabha member and Nehru biographer MJ Akbar, who was inducted as vice- chairman of the NMML’s executive council earlier this year. In a phone interview, Akbar tells Open, “What is wrong if we call it a ‘museum of governance’? It was the house from which Nehru governed India for 17 years.” When questioned on statements about widening the scope of the institution, he says, “The Congress party is playing mischief. Can’t something evolve without it becoming a crisis?”

There is consensus that the museum is in need of improvement. In its current state, the museum, which is housed in the residential quarters, is a collection of photographs that unimaginatively detail Nehru’s life and major milestones of the freedom movement. “There is no interactivity in the way it is designed. It needs to be contextualised, to be inspiring, so we get a sense of Nehru and his times,” says PK Datta, professor of political science at Delhi University, who conducted a large part of his research on communal ideology in Bengal in the 1920s at the library. “I’ve had a long, deep and extremely productive relationship with the NMML. It is the single most important resource for historians in contemporary India, and it represents a community of thinking people, one that is public and diverse.” But, is there scope for the Nehru Memorial to be wider than Nehru? “I think we can draw on those debates, but it should involve the public. The focus is bound to be Nehru, but there can be more voices from the national movement. It can be a place where the failings of Nehru are represented as much as his greatness.”

The NMML occupies a unique place as a centre for humanities and historical research in the country. The extensive and diverse collections in its library have been used by researchers from India and abroad for countless books and dissertations. Monumental works like Aijaz Ahmad’s In Theory and Sumit Sarkar’s Writing Social History were based on research conducted at the NMML. Apart from documents related to Nehru and the Congress, it has institutional records among others of the All India Hindu Mahasabha, All India Muslim League, All India INA Committee, Communist Party of India, and a vast catalogue of private papers of Mahatma Gandhi, C Rajagopalachari, Jayaprakash Narayan and Sarojini Naidu.

Teen Murti Bhavan was famously the official residence of Jawaharlal Nehru, who stayed here from 1947 until his death in May 1964, when it was turned into a memorial to him by Indira Gandhi, who some say wanted to ensure it does not turn into the official home of India’s next Prime Minister, Lal Bahadur Shastri. Teen Murti, they say, was hurriedly created and dedicated to the nation and the ‘people of India’ by her.

The colonial building was originally the residence of the commander- in-chief of the British Indian Army, designed by the architect of Connaught Place, Robert Tor Russell. It is a remarkable place for a city like Delhi, offering a sanctuary of peace and quiet in the throbbing heart of the Capital. With its wide expanse of grounds inhabited by peacocks, the constant sound of birdsong and an impressive stone and stucco building, it is ideal for slow saunters. The strife and political machinations of the last few weeks do not seem to belong here. But it is not the first time that the NMML finds itself in contentious territory.

In 2012, Ramachandra Guha, who had been associated with the NMML for more than two decades, wrote a long essay titled, ‘In Nehru’s House: A Story of Scholarship and Sycophancy’. It was as much an ode to the NMML and its glorious past as an indictment of its present state. The NMML became a centre for Indian intellectual activity under its founder director BR Nanda and his successor Ravinder Kumar, both historians who knew the importance of source material. Guha’s doctoral research on the social history of the princely state of Tehri Garhwal was conducted at the library. He credits most of his writing to it, and estimates that more than 800 published books have been based on its collection.

Mridula Mukherjee, a professor at Jawaharlal Nehru University, took over as director in 2005. The choice was made on the ‘old Indian system of sifarish’ by Sonia Gandhi, writes Guha, even though it was opposed by most intellectuals. Since the institution was named after Jawaharlal Nehru and housed in a building where both Nehru and his daughter Indira Gandhi had lived, ‘their heirs would have the final say’, he writes. The NMML saw its worst days then. The Gandhi family was promoted in all its programmes, the library stopped acquiring new papers, the staff was demoralised, and all intellectual activity was suspended, as the seminar room was taken over for Youth Congress meetings. Mukherjee’s loyalty was rewarded with a two-year extension.

When Rangarajan took over, the institution started coming back to life, say observers. He immediately restarted the tradition of weekly seminars. Along with English, he prioritised Hindi research and intellectualism, under the programme, ‘Samaj, Itihas aur Sahitya’. A long-time visitor to NMML, a political science professor from Delhi University volunteers information. “I have been coming here for years to source material from the library, to meet like-minded people. The place has changed greatly since he took over. At one time, there used to only be oldies here with sticks. He has created a vibrant culture that brings in young people. He would sit with the audience and ask questions like a layman. He would always be seen mingling with people. He even improved the canteen.”

Guha writes affectionately of the execrable tea at the canteen. The tea has not improved much, but it is a place where people can talk unreservedly. Two young students, Satarupa Lahiri and Prakriti Nangia are at the canteen discussing recent developments. Lahiri, a student of Centre for Studies in Social Science, is writing a dissertation on the food habits of the soldiers of World War I, and Nangia, who is from University of Pennsylvania, is studying social programmes for women in India. They both use the microfilm section of the library. Lahiri says with a shrug, “Are we having this debate because the place is named after Nehru? Does the common person even know that? For mostly everyone, this is Teen Murti, a place where all of our ideas can intersect. Let’s leave it at that.”

As the search begins for a new NMML director, the selection will be a litmus test on which the future of the institution may rest. At Nehru’s house, a new story will be told again.