Dear Mama, When Do I Grow Up?

Varun Gandhi still needs his mother to fight his battles 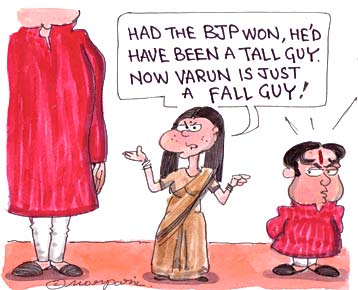 
In 2004, Rahul Gandhi and Varun Gandhi, cousins and grandsons of India’s only woman prime minister, Indira Gandhi—often called the only man in her Cabinet—entered politics. While Rahul joined the Congress and got elected to Parliament on a family seat, Amethi, Varun followed his mother into the Congress’s enemy party number one, the BJP. Congressmen were desperate to give Rahul charge of the party, while Varun struggled within the BJP for a Lok Sabha ticket from Vidisha or the position of a general secretary. He failed at securing both. Comparisons were drawn and Varun’s antics earned him the image of a go-getter. It was this attitude and not Rahul’s reticent ways that is the mark of a born leader, we were told.
Five years later, Varun tried so hard to be a leader of men that his desperation showed. Unlike his cousin, he chose a quick and banal path to appeal to people’s senses: by allegedly avowing at public rallies to maim and chop up those who might mean harm to Hindus. While the court is yet to decide whether video recordings of these hate speeches are real or not, Varun managed to appeal to some and win the Lok Sabha election from Pilibhit—earlier his mother Maneka Gandhi’s constituency. The seat was won but the comparison is lost.

While Rahul Gandhi is now virtually leading the Congress, Maneka continues to fight Varun’s battles. When the BJP met for its national executive last month, Maneka took on the BJP’s Muslim leaders, MA Naqvi and Shahnawaz Hussain, for targeting her son. Now, she has written to the PM ‘with deepest concern for my son’s life and safety’. The caustic letter goes on to accuse Manmohan Singh of putting his party’s interests first and targeting Varun ‘because he seems to be a political threat to you and your party’. She suggests, ‘It is as if you want Varun Gandhi to be killed.’

Varun is now a lawmaker. But what kind of leadership can you expect of a man who needs a letter from his mum to ward off threats? Those who might have voted for him after getting impressed by the promise of machismo in his hate speeches, surely weren’t looking for a man tied to his mother’s apron strings.