In Kerala, the Church fuels an agitation based on a misreading of an environmental report on the Western Ghats 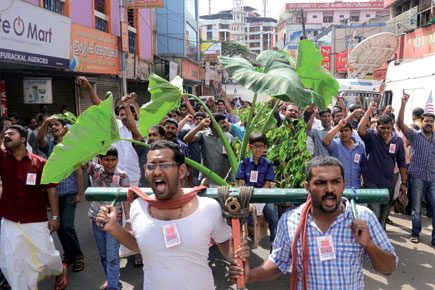 In Kerala, the Church fuels an agitation based on a misreading of an environmental report on the Western Ghats

At Arakkulam village in Idukki district, farmers have laid siege to the Moolamattom Power House Project. Three hundred people have been blocked off by barricades set up 1.5 km away from the powerhouse. Most of them, especially the women, look tense. The village itself is deserted. Not a single shop is open, schools are shut.

The trigger for the protest was the Union Environment Ministry’s decision to implement recommendations of the Kasturirangan Committee report on the Western Ghats. The report recommends restrictions be imposed on development activities in order to preserve the region’s ecology. “We will be displaced from our land,” one farmer tells me. “Even if we are allowed to stay back, we will not be allowed to farm even food crops.” Lissy Thomas, an agricultural labourer, says she has been told they will not be allowed even to keep livestock or do poultry farming. “One family cannot keep more than three roosters or hens at a time,” she says.

Everyone at the dharna has similar information and they believe it. But almost all of it is half-truth and exaggeration, the result of disinformation spread by the Syro-Malabar Catholic Church, the largest church in the country. Through pastoral letters and public speeches by its priests, the Church has fanned the agitation against the report.

Following large scale migration from the mainland to the hills during the 1950s, a significant population in the High Ranges—the part of the Western Ghats that falls in Kerala—have been Christians. With the aid of cash crops like rubber, tea, coffee and cardamom cultivated there, they laid the foundation of Kerala’s modern economy. The Church is campaigning against the report to appease this constituency.

Present at the Power House siege is Molly Thomas, who has no doubt that the report’s implementation will displace locals like her. “We were told so even today morning in the Church,” she says.

About a year ago, the hill areas of Idukki had seen another agitation directed against Tamil Nadu over the Mullaperiyar Dam. Cooked-up nightmare scenarios about the dam bursting ratcheted up hysteria, creating fierce hatred between villages on both sides of the state border. Politicians and the local media invented pseudo scientific theories to scare people about a ticking water bomb. But the protests soon came to an abrupt end and the Mullaperiyar dam stands in the same shape today as it has for over a century. That agitation had been organised by political parties, with the Church playing a supporting role. With the protests against the Kasturirangan report, it is the other way round.

The report was released on 17 April 2013. On 13 November, the Centre issued a notification for the report’s implementation. This led to immediate unrest. Widespread violence erupted across Kannur, Kozhikode and Wayanad districts following a hartal declared on 15 November. The Forest Range Office at Kottiyur in Kannur district was set on fire. Police say more than a hundred case files of forest-related offences were burnt. A violent mob of around 500 men attacked the forest range office at Thamarassery in Kozhikode. Seven vehicles were set ablaze, including one State Transport bus. The mob waylaid a police team and injured the Superintendent of Police in stone pelting. The police fired three rounds in the air to disperse the crowd.

Cases were registered against more than 3,000 people. The police say that the miscreants who went on a rampage that day were brought in by lorries and that the violence was strategised by the quarry and sand mafia—the only parties who will be affected by the Kasturirangan report, which recommends a complete ban on mining, quarrying and sand mining in ecologically sensitive areas.

The hartal and subsequent agitations were called by an umbrella of recently formed organisations—The High Range Protection Committee, Western Ghats People’s Protection Committee and Western Ghats Protection Committee. What is common to all of them is that they are all led by priests belonging to the Syro-Malabar Catholic Church. For example, Father Thomas Manakkunnel is chairman of the Joint Protection Council, which is coordinating all the organisations. Bishop of Thamarassery, Mar Remegiose Inchananiyil, was one of the main speakers at all the public meetings against the implementation of the report. And Father Sebastian Kochupurakkal is the general convener of High Range Samrakshana Samithi, another entity that organises these agitations. The Church, of course, denies any role in the violence, but photographs and videos establish the presence of its officials.

The Forest Department has submitted a report to the state government naming Father Saji Mangalath, a priest at Chembukavu Church in Kozhikode, along with a few others for physically participating in the rampage during which the Thamarassery Forest Office was set on fire.

In Kattappana, Idukki, a priest reportedly warned people during a dharna that children will be booked by the police under provisions of the Wildlife Act if they cry after seven in the evening. Another rumour is that those living in ecologically sensitive areas will not be able to watch TV or listen to music at night. Recently, the Bishop of Thamarassery, while addressing a one-day strike before the Collectorate, warned that there will be ‘bloodshed’ if the government implements the report. He said there will be one more Jallianwala Bagh and that Naxalism would creep into Kerala’s hill areas.

A pastoral letter issued by the Syro-Malabar Catholic Church, which was widely read across all churches in districts adjacent to the Western Ghats, said, ‘The Kasturirangan report is an open invitation to multinational companies to conquer our land .Though the report does not directly say anything about displacing the farmers, it will certainly happen if the recommendations of the report are implemented.’ The report, however, makes no mention, direct or indirect, of any such displacement.

In this agitation, Kerala also witnessed the rare sight of two traditional enemies—Communists and the Church—joining hands. The CPM called for another hartal on 18 November in support. CPM Politburo member Kodiyeri Balakrishnan wrote on his Facebook page that the government is trying to impose the recommendations upon people unilaterally, with no effort to address their worries. ‘People living in the high ranges have genuine worries about the impact of the report,’ says Kodiyeri Balakrishnan.

The Kerala Congress, a regional ally of the ruling United Democratic Front, which is one of the most influential political parties in Idukki and Kottayam districts, also spread panic to increase its popularity among Christians. Only the Church could have got such disparate parties together for an agitation.

The Western Ghats span six states— Gujarat, Maharashtra, Goa, Karnataka, Tamil Nadu and Kerala. This region is listed as one of Unesco’s World Heritage sites and among eight hotspots of biological diversity on the planet.

The recent debate on conserving the region’s biodiversity stemmed from a 2005 Supreme Court judgment on a case filed by the Goa Foundation, an environmental group fighting against mining in the Western Ghats. The verdict instructed the Centre to stop all illegal mining activities in the state. The court also asked for other ecologically fragile zones to be identified.

The Centre sent numerous notices to the governments of the Ghat states, including Kerala, asking them to map such zones, but got no response to repeated queries. A Western Ghats Ecology Experts Panel, chaired by Dr Madhav Gadgil, was appointed under directions of the Supreme Court. Its report, submitted in August 2011, divided the Western Ghats into three zones based on biodiversity, rainfall and other climatic conditions, and placed different levels of restraint on human intervention in those zones.

123 Kerala villages fall within this ‘natural landscape’. Other states have more villages that come under this zone—1,179 in Maharashtra, 1055 in Karnataka, 200 in Goa and 133 in Tamil Nadu. But none of these states witnessed violent protests like Kerala did.

“We never promote violence,” says Father Paul Thelekkat, spokesperson of the Syro Malabar Catholic Church, “neither in theory nor in practice. Some miscreants crept into the protestors, and thus, violence broke out.”

This excuse does not convince everyone. “Whatever they claim, they cannot evade the responsibility of spreading fear and thus instigating people,” says Harish Vasudevan, a lawyer and environmentalist. “The priests and local political leaders do not give people an opportunity to understand the Committee’s recommendations. Instead of giving them translated copies or extracts of the report, they spread baseless theories.”

With such disinformation, locals are genuinely scared of the report’s implementation. A group of farmers I met in Kattappana town said they were told that they would not be able to build houses and that no new roads or bridges would come up. “We cannot even buy or sell land,” said one of them.

A cursory look through the report, however, shows that these fears are baseless. Its ‘Executive Summary’ contains its recommendations for action and there is no indication whatsoever that the lives of ordinary people will be affected.

» ‘…is recommending a [prohibitive] and regulatory regime in ESA [Ecologically Sensitive Area] for those activities with maximum interventionist and destructive impact on the ecosystem. All other infrastructure development activities, necessary for the region, will be carefully scrutinised and assessed for cumulative impact and development needs, before clearance.’

» ‘There should be a complete ban on mining, quarrying and sand mining in ESA. All current mining areas should be phased out within the next 5 years, or at the time of expiry of mining lease, whichever is earlier.’

» ‘All ‘Red’ category industries should be strictly banned. As the list of industries categorised as ‘orange’ includes many activities like food and fruit processing, there will not be a complete prohibition on this category. But all efforts should be made to promote industries with low environmental impacts.’

» ‘Building and construction projects of 20,000 m2 and above should not be allowed. Townships and area development projects should be prohibited.’

The report categorises industries as ‘red’, ‘orange’ or ‘green’ based on the degree of pollution they produce, red being the most polluting, with 17 industries under it. Restrictions are to be imposed only on red category industries, and on buildings above 20,000 m2. This contrasts with the popular belief that no bridges, roads or houses will be allowed to come up.

There are lone voices of dissent against these protests. The Church of South India (CSI, successor to the Church of England in India) has made a public statement dismissing the protest as ‘politically motivated’ and demanded implementation of the Gadgil Committee report instead of Kasturirangan. ‘Natural disasters have to be taken as signs [of] God for the protection and conservation of nature,’ said Bishop Thomas K Umman of CSI in a statement issued to the press. ‘We will [be taught] a lesson if we don’t listen.’