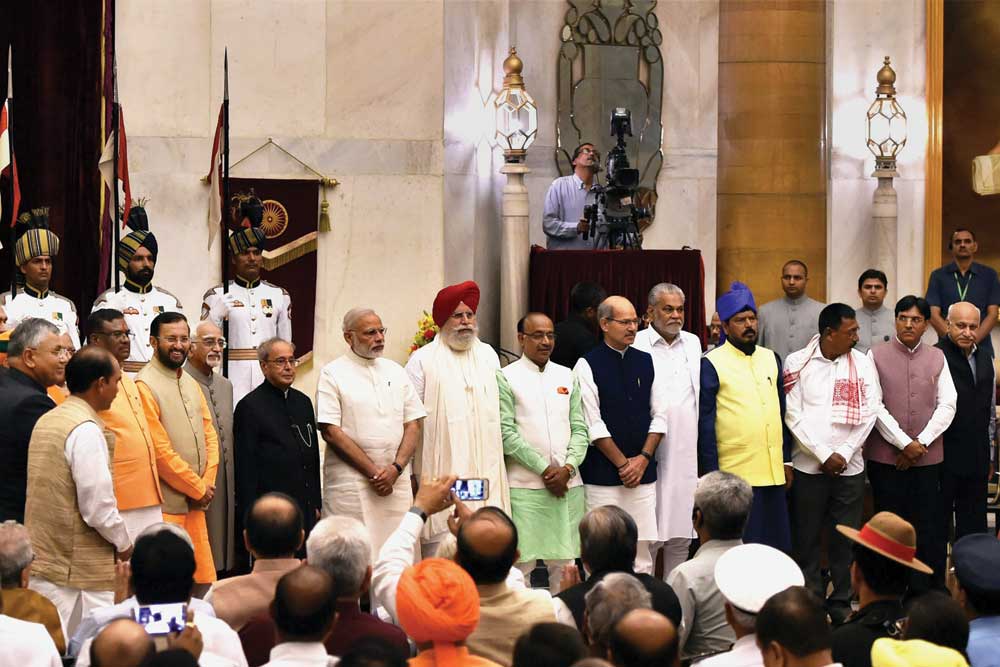 AFTER THE SWEARING-IN ceremony on 5 July, the newly inducted ministers were called into a meeting with Prime Minister Narendra Modi at 2.30 pm. The meeting lasted about 40 minutes and the message was clear. There is no time for celebration and everyone should start work right away to meet the goals set by the Government. Modi also let it be known that the current ministerial setup would be rejigged by the end of the day. What appeared a cosmetic exercise in the beginning had, by evening, turned into a structural overhaul of the Modi Cabinet. Political pundits who were analysing the reshuffle based on caste and election arithmetic were taken by surprise when the portfolios were announced. Indeed, it was a reshuffle rather than an expansion. And its message was unambiguous: at no cost would the Prime Minister compromise on his development and growth agenda.

The biggest casualty was Smriti Irani, former Union Minister for Human Resource Development, who has been handed the decidedly less important Textiles portfolio. Until now, it had appeared that the ruling BJP and the Government were both happy with her belligerence against rivals and opposition leaders, especially Congress Vice-President Rahul Gandhi, not to mention her run-ins with educationists. However, Irani’s zest for repartee always made news for the wrong reasons. She was heading one of the most important ministries, entrusted with the Centre’s ambitious New Education Policy. But instead of fostering a constructive debate on education, she was consumed by one fracas after another with bureaucrats, vice-chancellors, students and politicians. Her inflexible approach, especially during crises—be it the Rohith Vemula suicide or the JNU episode—earned the Government a bad name. The past few months saw her locked in battle with the NITI Aayog over accreditation of new institutions. Her differences with the heads of IITs and universities were not new. Things were so bad that some of her Ministry officials wanted to be transferred out.

The IIM bill is yet to see the light of day, thanks to Irani’s difference of opinion with the PMO. She wanted the Government to have a say in the running of IIMs, as it has in the IITs, but the PMO was not convinced. She picked petty fights too. A few weeks ago, she got into a Twitter brawl with Bihar Minister for Education Ashok Choudhary over his addressing her as ‘Dear’. In the end, she stuck out like a sore thumb in a government that wants to reform the education sector.

Despite this troubled record, Irani has taken charge of the Textile Ministry with a smiling face, evading media questions. The Union Cabinet, she pointed out, had announced a special package of Rs 6,000 crore for the textile sector on 22 June. All Irani had to say about her new job was that the Prime Minister and the party consider her capable of implementing the roadmap for the sector. “She is very dynamic,” says M Venkaiah Naidu, the newly appointed Minister for Information and Broadcasting. “Besides, it is the prerogative of the Prime Minister to decide the role of his Cabinet colleagues. No one is unhappy over the decision.” Naidu himself has been relieved of Parliamentary Affairs and given I&B to look after along with his existing Urban Development, Housing and Urban Poverty Alleviation.

Irani’s loss was Prakash Javadekar’s gain. On 4 July, Javadekar, a minister of state with independent charge of the Environment Ministry, was attending a conference on climate change in Germany when he got a call from Modi asking him to cut his trip short and return to Delhi. When Javadekar said that he could only reach by 8 am the next day, the Prime Minister asked him to ensure his flight was on time. He was in Delhi by five in the morning, and found he is the only minister promoted to Cabinet rank in the rejig.

Javadekar is credited with fast-paced environmental clearances for projects that were held up since the UPA days. In two years, he did what two of his predecessors did not do in ten years. He had environmentalists to deal with on one hand and corporates in need of clearances on the other. Not only is he in sync with Modi’s agenda of turning India into a top investment destination, his talk-less-work-more reputation is expected to be an asset for the Government as he takes over a ministry fraught with controversy until now. His background as a swayamsevak will presumably also help him handle RSS pressure. “Education is not a subject of party politics. I will consult everyone in the process of reforming the education sector,” he has said.

Javadekar’s former ministry is now headed by Anil Madhav Dave, another major gainer in the reshuffle. A third-time Rajya Sabha MP and well-known river conservationist and environmentalist, Dave is a former RSS pracharak. His experience with ecological issues has bagged him the portfolio. “Environment and development go together and are not against each other,” said Dave while taking charge.

Another minister whose star has soared is Manoj Sinha, minister of state for Railways before being given independent charge of the Telecom Ministry. Sinha’s popularity in eastern Uttar Pradesh and his quiet and efficient style of functioning have been rewarded, but his new responsibilities are not to be taken lightly. His predecessor Ravi Shankar Prasad earned the sobriquet of ‘call drop minister’. Sinha needs to work on relations between the Government and telecom companies, which are at their lowest ebb right now. He will also oversee a much-awaited spectrum auction in the offing. Prasad, meanwhile, has been allotted Law and Justice, a ministry he seems to be more in tune with because of his background in law.

Another domain expertise based appointment is that of MJ Akbar as a minister of state for External Affairs, given his knowledge of global geopolitics.

The inclusion of 19 new ministers takes the strength of the Modi Cabinet up to 78, which seems to be at odds with his ‘minimum government, maximum governance’ approach. But Naidu defends the expansion. “Article 72 of the Constitution provides that the total number of ministers should not exceed 15 per cent of the strength of Parliament and we are well within that limit,” he says. “To serve a country with wide geographies and also to deal with the range of issues, you need people from different parts to take part in decision making.”

THE RESHUFFLE ALSO saw five ministers being dropped from the Cabinet, and this should come as a warning to those who don’t score on the performance criteria set by Modi. Other ministers find themselves in the departure lounge and may be shown the door. Najma Heptulla, Minister for Minority Affairs, was nearly dropped, only to be spared because she was abroad. Sadananda Gowda, an underperforming minister from Karnataka, who had been shifted from Railways to Law and Justice, was saved by his caste. He hails from the Vokkaliga community, which forms 17 per cent of the electorate of a state that is headed for polls in less than two years. He has been transferred to Statistics and Programme Implementation, but insiders do not expect him to last long.

This is not to say that there weren’t caste or electoral considerations at play in the reshuffle. The induction of ministers from poll-bound states is a common practice in India and Modi’s expansion follows the trend. Three new ministers have been inducted from Uttar Pradesh and one from Uttarakhand, with an eye on electoral gains. Caste equations dictated some of the appointments. Anupriya Patel, a Kurmi leader popular in eastern UP, has been given a ministerial berth with an eye on the 8 per cent slice of Kurmi votes. The party wanted to add a Brahmin face from UP, and Mahendra Nath Pandey, MP from Chandauli, was an obvious choice. Pandey is close to Rajnath Singh and commands the support of many Brahmins in the Varanasi- Chandauli region. The third new appointee from the state, Krishna Raj, a Dalit, has been inducted to attract the votes of Passis, the second largest Dalit group after Jatavs in the state. The BJP hopes to make inroads into the Bahujan Samaj Party’s vote bank by inducting Raj.

The reshuffle has reinforced the fact that only those who follow their ministerial brief will remain in Modi’s good books. Specialised skills are welcome, if exercised with due prudence. Take Jayant Sinha, for instance. Everyone approved of Modi’s appointment of a former investment banker—who happened to be the son of former Finance Minister Yashwant Sinha—as Minister of State for Finance. Sinha was entrusted with handling revenue and banking, but he crossed the line several times and often spoke out of turn on subjects he was not fully acquainted with. In June, he misquoted Modi, saying the Government was aiming to double the number of income tax payers in the country; the ministry had to issue a clarification. Another time, after the last Parliament session, he held a dinner party to celebrate the passage of a number of bills, to which he’d invited bank chiefs, investment bankers and Finance Ministry officials, which didn’t go well with the Government. The presence of his investment banker wife, Punita Kumar, also raised eyebrows. Sinha has now been made a junior minister for Civil Aviation.

Energy, experience and expertise define the reshuffle, according to Naidu. The fourth ‘E’, elections, is also a factor. Slackers should beware. Performance and the image of the Government matter most to Modi, who has an eye firmly on another term for himself in 2019.