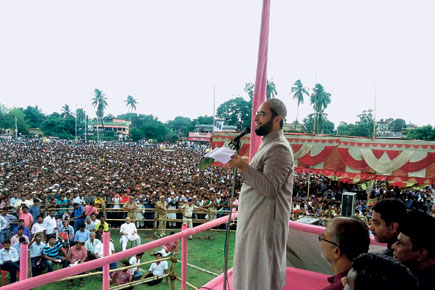 As Bihar’s Assembly elections approach, the Muslim voter holds the key to political fortunes in the state. But election season can be frightening for Muslims. Educationally and economically backward, typically, the confused and bewildered Muslim voter—usually a tailor, farm worker, mechanic or a rickshaw puller— looks up to the community’s leadership to guide him as he wonders which party to vote for. Not that his search for a political choice yields new results; often, the choice is already known. Nevertheless, he persists with an agonising exercise to pick a candidate.

This is also the season in which fortune tellers, especially journalists of a class at pains to explain that no Muslim vote bank exists, analyse the so-called ‘Muslim factor’. The argument runs as follows: about 17 per cent of Bihar’s voters are Muslim; in 70 of the state’s 243 Assembly constituencies, Muslim voters can play a crucial role. In reality, the Muslim voter is like Britannia’s 50-50 biscuit: sweet for some, salty for others; the chance that his candidate will win is 50-50, as a reverse consolidation of Hindu votes can defeat his choice. The Muslim voter, all the same, gets into the electoral considerations of Nitish Kumar, Lalu Prasad and other secularism-brandishing practitioners of Indian politics.

As the Muslim voter ponders the eletoral options, two groups of people stepin to play his messiah. One, the local zamindar (landlord) and his loyalists; in agricultural India, where land ownership is a sign of social status, the Muslim voter often looks up to a zamindar for leadership. Two, mosque leaders and madrassa teachers; this clerical class shapes mass Muslim opinion, though its influence is sometimes subservient to that of the first group. By and large, although Muslims have access to TV news channels, their political choices are shaped mostly by zamindars and clerics whose views have wide reach within the community. Addressing an audience of young Muslims in Patna on 11 August this year, Maulana Shakil Ahmed Hashmi of the Ittehad-e-Millat Council, for example, made this bold statement: “The existence of Muslims in India is under threat.”

Muslim women turn up in less numbers to vote. “This is the reality—that the number of Muslim women casting votes is negligible; their role is zero [in politics],” said community leader Nizamuddin Qasmi at an Independence Day event in Munger, adding, “The vote of Muslim women in India’s democratic system is very important. Its importance is known to the other nation [of Hindus].” It’s noble of course to get Muslim women to vote, but often Muslim women are herded to the polling booth by the menfolk just for added numbers to defeat the Bharatiya Janata Party (BJP). Frightening Muslims is also a fringe of the BJP that was emboldened after the 2014 General Election—it has tried to raise buried disputes over, say, who has a right of way through a Muslim graveyard, as seen in Chegauna in West Champaran district.

The business of scaring Muslims moves into top gear as election campaigns gain momentum. The Urdu press, which has some influence among Muslims, often serves the zamindar and the clerical class in this; even Hindu-owned Urdu dailies do the same. In an editorial on 7 August, for example, Roznama Sangam warned Muslims that they had better be ready for sacrifices, saying: ‘Bihar’s politics is passing through a very sensitive period at this time. The people of the state’s secular, moderate and minority groups have a big responsibility to defeat BJP at every cost. For this, they will have to offer every kind of sacrifice.’ Frightening the Muslim voter is an electoral device: the newly stitched alliance of Nitish Kumar’s Janata Dal- United (JD-U), Lalu Prasad’s Rashtriya Janata Dal (RJD) and the Congress party led by Rahul Gandhi is currently being presented as a saviour of Muslims.

Irrespective of his message of ‘Sabka saath, sabka vikas’ (With all together, development for all), Narendra Modi is presented as the villain. Without him, it seems, Indian secularism would be incomplete. The politics of scaring the Muslim voter works. In 2014, the BJP won 31 of 40 Lok Sabha seats in Bihar, but its only Muslim candidate Shahnawaz Hussain lost from Bhagalpur. In the 2010 Assembly polls, Saba Zafar was the only Muslim BJP candidate to win from Amour seat in Purnea district. It is impossible to imagine that Muslims in Bihar will vote BJP this year. Addressing a gathering in Purnea on 7 August, Muhammad Ghauri, a Muslim leader, said, “Islam and politics have a deep relationship. It was on the basis of his political awareness that Muhammad bin Qasim attacked India at the age of 16 [in 712 CE]. Today, Muslims need the passion of Muhammad bin Qasim and the fortitude of Salahuddin Ayubi [the Muslim warrior who conquered Jerusalem in 1187 CE].”

On 16 August, Irshad Ali of the JD-U’s minority cell accused the BJP of “saffronising” the elections in Bihar, though his own politics involves communalising the arena by herding Muslims to booths to vote en bloc. Ali warned that Bihar’s elections could be lost to “riots”, and, according to Roznama Sangam (17 August), added, “In such a sensitive era, Muslims have to work carefully. This election is connected to the honour of Muslims.” Unfortunately, even the BJP has a ‘minority cell’ instead of treating Muslims simply as ‘Indians’. Meanwhile, secular leaders and Muslim journalists are worried that Modi’s UAE visit, especially to the Sheikh Zayed Mosque, could upset their calculations. “Modi should go to mosques and apologise for his mistakes,” said Lalu Prasad on 20 August. Rasheed Ansari, writing in Urdu Times, was however happy to offer a forecast: Modi’s UAE visit will not impact Muslim voters.

Several analysts argue that no Muslim vote-bank exists, but it is unclear how one determines which voting machine button was pressed by a Muslim finger in two-way electoral contests where a vote swing of just 1 to 3 per cent can shift the final outcome. Bihar’s eastern Seemanchal region, near Bangladesh and Nepal, acquires importance in this scheme of calculation as the Muslim population in its four districts is high: 37 per cent in Purnea, 41 per cent in Araria, 43 per cent in Katihar and 78 per cent in Kishanganj. But in Muslim-dominated regions, even the BJP is likely to field Muslim candidates. “This time,” Mangal Pandey of the BJP has said, “we may field up to 10 Muslim candidates.” So, for the Muslim voter, the choice in many constituencies remains limited to Muslim candidates.

Meanwhile, Asaduddin Owaisi, leader of the All India Majlis-e-Ittehadul Muslimeen (AIMIM), has made a wild- card entry to Bihar’s politics and could field election candidates for as many as 25 Assembly seats. Owaisi’s 16 August rally in Kishanganj was a success and an indication that a new generation of Muslims is searching for a new leader. Owaisi’s politics is divisive and does not reflect the change or ‘parivartan’ that the country’s Prime Minister has been advocating.

The Muslim voter thus remains at the receiving end of what is dished out in his name. All classes of analysts scare him: Islamic clerics, Muslim journalists, secular Hindus, or others. Former MP Dr Ejaz Ali told a journalist that Owaisi’s arrival in Bihar is tantamount to “strengthening the BJP”. For the Gujarat riots of 2002, the BJP is seen as communal, while the Congress, despite having caused thousands of riots from the 1960s to the 90s, is seen as secular.

Secularists are no less divisive than Owaisi. As the RJD leader and former Union minister Mohammad Taslimuddin told a reporter, “There seems to be a larger conspiracy to pollute the prevailing atmosphere of communal harmony in the Seemanchal region by inviting Owaisi to contest the upcoming elections. His party doesn’t have any presence in the region and it will prove only a vote katva (splitter).” Ghulam Rasool Baliavi of the JD-U was quoted as saying, “I do not think that Owaisi’s party contesting elections will make a difference because Bihar’s electoral scene is different… The rush at his rallies does not mean that the rush will translate into votes.”

Over the past decade, India has witnessed the rise of two politicians working for development, and both emerged from the BJP-led National Democratic Alliance (NDA): Narendra Modi and Nitish Kumar. In the run- up to the 2014 General Election, Nitish Kumar misread the nation’s mood and quit the NDA in the hope that he would become India’s Prime Minister, supported by the Congress, in the event of a fractured verdict. Now, he is reduced from working for development to playing the secularism card. Nitish Kumar was with the RJD, later joined hands with the BJP and now his JD-U is back in an alliance with the RJD and Congress. To him, playing secularism means cultivating communalism. On 17 August, Nitish Kumar told a gathering that the Rashtriya Swayamsevak Sangh (RSS) is running the Modi Government at the Centre, and on the same day at another event, he wore a skullcap to wish goodbye to Muslims going for Hajj. The timing of this suits him electorally.

Look at developments in August alone. According to Roznama Inquilab (18 August), Bihar’s Nitish government in Patna has announced a revised pay scale for teachers of 179 minority schools in the state. On its front page, Roznama Sangam (19 August) reported that the Nitish cabinet raised the grant for the Shia Waqf Board from Rs 20 lakh to Rs 80 lakh, with Rs 60 lakh coming from the Bihar emergency fund. It also raised the grant for the Sunni Waqf Board to Rs 2 crore from Rs 50 lakh earlier. When was the last time Waqf boards in India helped Muslims?

In an interview with Twocircles.net, Akhtarul Iman, formerly with the RJD and later with the JD-U, was candid about this, “These secular parties need minorities… They need Muslim faces; they don’t need a leader of Muslims.” He is now more likely to join the AIMIM.

Both Owaisi and the secular alliance foster Muslim communalism. If the secular groups host an iftaar party, it is presented as positive, but if the RSS does the same, as it did on 4 July, it is called ‘communal’. The Muslim voter is caught in this cycle of double-standards. So, here it is: to the two categories of zamindars and clerics who influence Muslim electoral behaviour, add a third one: the Hindu politician, wearing a mukhota (mask) of secularism, reinforcing Muslim fears by treating them as second-class citizens not at par with Hindu voters. Elections thus remain a season to frighten Muslims, and unless they see through the mask, they will not be able to embrace progress.