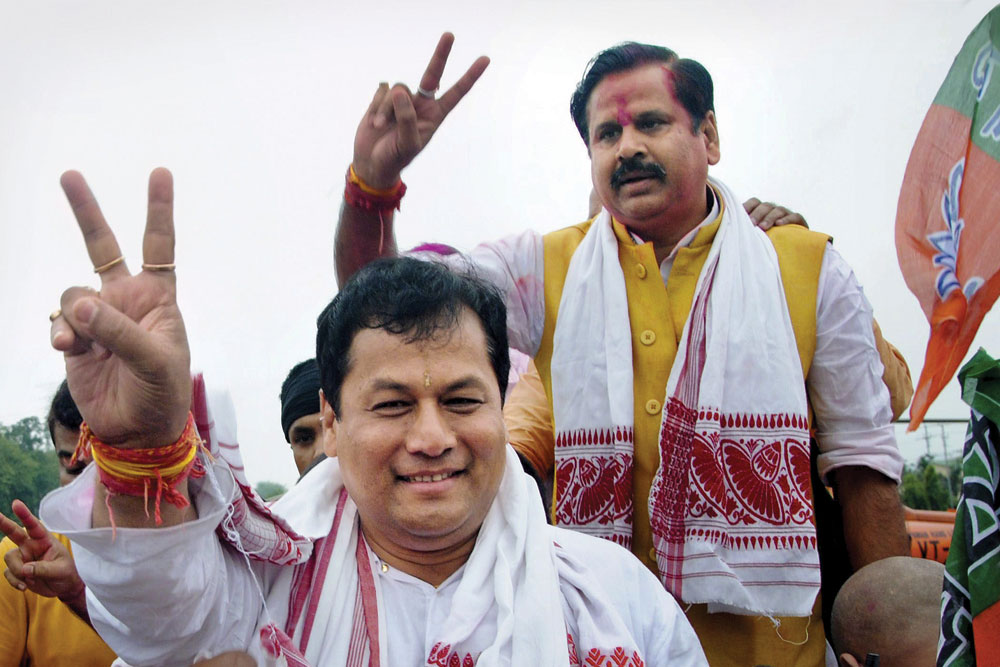 IN THE END it looked so simple. The BJP has finally won Assam and resoundingly at that. In a 126-member house, the BJP alliance won 86 seats. Assam is one of the most diverse and politically complex states of the country, and the key to power here lies in stitching together a social coalition. For 15 years, the Congress managed this well. This time, it simply ran out of ideas.

There were two background factors that made this possible. One, in its 15 years of rule, the Congress did not do anything to assuage the anxiety of Assamese people about illegal migration from Bangladesh. Rather, in the name of keeping Assam peaceful under a ‘rainbow’ alliance of social groups, it swept the problem under the carpet. Two, economically, Assam now lags far behind the rest of the country. The gap between per capita income in the rest of India and Assam has more than doubled between 2004-05 and 2014-15. The state ranks nowhere near any of the top investment destinations in the country.

The BJP’s win, however, is not a default handover of power due to anti-incumbency. Unlike more homogenous states, where disillusionment with the ruling party simply means a wholesale shift of electoral fortunes, in Assam a new coalition has to be forged. And the BJP succeeded in doing this with aplomb at every level—attracting new partners and displaying sharp organisational acumen.

In crafting a new coalition, the BJP allied with the Asom Gana Parishad (AGP) which was once a ruling party in the state. In the four Bodo dominated districts of Assam, the BJP tied up with the Bodoland People’s Front (BPF). But most importantly, the party brought into its fold new—local—leaders like Sarbananda Sonowal and Himanta Biswa Sarma. Both were important ‘catches’: Sonowal belonged to the AGP, and Sarma—the organisational force behind the win declared on 19 May—was virtually ousted from the Congress.

The other side of the coin—that of the losing party—presents a stark picture. The two factors that did the Congress in were its loss of organisational vitality and its misplaced hope of the Muslim vote being consolidated against the BJP in Lower Assam, a region that accounts for 64 of 126 assembly constituencies. The kind of polarisation the Congress expected did not take place, and the BJP-AGP- BPF alliance put up a credible performance. Instead of voting as a bloc, Muslims of the state—divided along social lines—voted for the Congress and the All India United Democratic Front (AIUDF).

The AIUDF, the party of a perfume baron Badruddin Ajmal, is largely favoured by Muslims who have migrated from Bangladesh. Assamese Muslims, who have been settled in the state for long, tend to favour the Congress. It is not surprising that on Thursday, Ajmal blamed the Congress for his party’s loss. While there was no formal alliance between the Congress and AIUDF, it was expected that in case of a ‘tight’ electoral situation—where the balance between the BJP and the Congress would not be more than 15-20 MLAs— Ajmal would tilt the scales in the latter’s favour. That did not come to pass. Incredibly, Ajmal lost from Salmara South constituency in the Muslim-dominated Dhubri district adjoining Bangladesh.

What hit the Congress hard was its organisational disarray. Its chief political organiser, Sarma, left the party because Chief Minister Tarun Gogoi envisioned a political career for his son Gaurav Gogoi. Sarma, a popular minister credited with putting Assam’s education and healthcare systems back on the rails, rightly understood that this would be at his cost. It was an exit that has hurt the Congress badly.

Assam is significant for the BJP in more ways than one. Locally, it is an affirmation that illegal migration and Assam’s anxiety about its identity make it a natural constituency for the BJP. At one time, it was the AGP that championed this cause. But as the history of the period from 1985 to 2015—the farcical politics of the illegal migrants tribunal being a prime example— shows, this was a problem well beyond the means of a regional party acting on its own. The AGP needed the BJP, and in 2016, this combination has worked. Nationally, too, Assam signifies the increasing reach of the BJP well beyond the confines of the Hindi heartland. After Jammu & Kashmir, Assam is a key—and often troubled—border state where the BJP has come to power in recent years. Far more than the Hindi belt states, where regional parties come and go, it is in these strategically important states where the governance needs of the local people need attention. In these states, and Assam is a good example, governance has too often been at a discount while stratagems to stay in power held a premium.