Syama Prasad Mookerjee: Out of Sight

Syama Prasad Mookerjee doesn’t get the scholarly attention he deserves 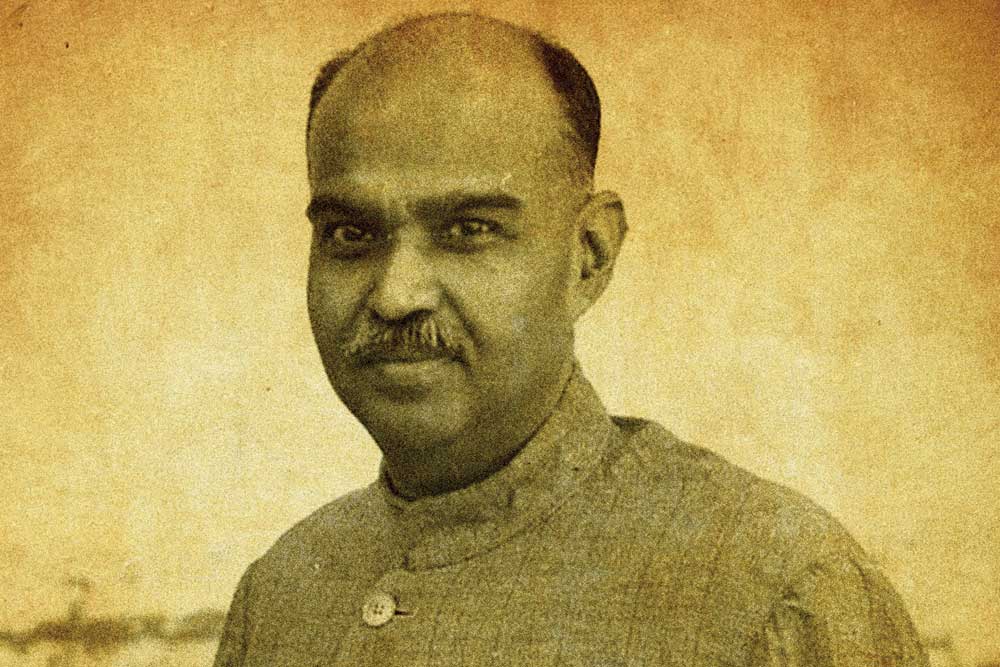 IN OCTOBER 2017, there was a question on the Kaun Banega Crorepati show, ‘Which member of Jawaharlal Nehru’s cabinet resigned and founded a new party in 1951?’ It wasn’t one of the early-rung questions. Even then, I was surprised when the participant got the answer right. Perhaps I am being unfair. But I suspect, twenty years ago, in a similar situation, not too many participants would have known. Independent India’s discourse has been shaped in a certain way. Moulded through that jaundiced view, Dr Syama Prasad Mookerjee hasn’t got his due. The naming of educational institutions, roads, bridges, buildings, swimming pools, towns and schemes after him is a relatively recent phenomenon. Perhaps the only exception is the University of Delhi’s Shyama Prasad Mukherji (spelt thus) College. However, even for this college, the preference seems to be to refer to it as SPM College, as if one has Suspended Particulate Matter in mind. Had it not been for SPM, not only India’s legacy, independent India’s geography too would have been remarkably different. More likely than not, the state of Punjab would have been part of Pakistan and the state of West Bengal would have been part of Bangladesh. This may sound exaggerated, but it is part of documented history. If this sounds exaggerated, that’s because of Dr Syama Prasad Mookerjee’s marginalisation in popular renderings of India’s Independence movement and because good books on him are rare.

What books can one possibly think of? (1) Anil Chandra Banerjee (2000), but that covers a brief (1937–46) period of his life; (2) Prashanto Kumar Chatterji (2010), but that covers only one aspect (political) of his life; (3) Manoj Das Gupta (2001), but that is essentially the printed version of a talk and is more a monograph than a book; (4) a brief profile published by the Dr Syama Prasad Mookerjee Research Foundation (2016); (5) the compilation of documents, speeches and correspondence by Harish Chander Padmini (2001); (6) the Lok Sabha Secretariat’s monograph on eminent parliamentarians (1990); (7) Balraj Madhok’s brief portrait (1954); (8) Syama Prasad Mookerjee’s diaries (1993), that too, only for a certain period in his life; and (9) various collections of his speeches, including a recent (2017) compilation by the Dr Syama Prasad Mookerjee Research Foundation of speeches on education. For a person who left such an indelible impression, this is all too brief a list, almost perfunctory. If one extends coverage beyond English and includes Bengali, in the realm of books and monographs, one will at best add half a dozen more. One of these is in Bengali and is titled Syama Prasad Ke Na Jana Aparadh. This translates as ‘It is a crime not to know about Syama Prasad’. If there has to be atonement for the crime and amnesia, and the biased telling of history, both deliberate and inadvertent, there has to be a good book about SPM––the man and his times. Tathagata Roy has produced exactly that and the subtitle ‘Life and Times’ is entirely justified.

Who was Dr Syama Prasad Mookerjee? ‘After Syama Prasad demitted the office of the vice chancellor, the university conferred an honoris causa doctorate degree on him. The prefix of ‘Dr’ somehow fitted him well, and gradually, he came to be universally known as ‘Dr Mookerjee’.’ This was in 1938, the same year that Banaras Hindu University conferred another honoris causa doctorate degree on him. To step back a bit, SPM was the son of the legendary Sir Asutosh Mookerjee. If one were to follow in the illustrious father’s footsteps, one could have become an educationist or a lawyer. Academically, he was prepared for either, having topped the BA Honours in English and also having topped the MA in Bengali. He then went on to do a BL and became a barrister…

But politics beckoned, through the Bengal Legislative Council seat from the Calcutta University constituency. The plight of minority Hindus in what was then Bengal transformed this beckoning into a full-time career through the Hindu Mahasabha. Eventually, this path led to his becoming finance minister of Bengal between 1941 and 1942 in AK Fazlul Haq’s coalition government and subsequent resignation. Compared to other episodes in his career, his role as finance minister and engagement in famine relief is relatively ignored in biographies other than this one. More than 2 million people died in the Bengal Famine of 1943–44, some because of starvation, others because of subsequent disease and adverse health effects. In recent times, a lot has been written by economists and historians on the Bengal Famine, arguing that it was the outcome of faulty distribution, deliberate or otherwise, rather than a shortfall in supply. A bibliography will be as long as an arm. In such explorations, rarely, if at all, will SPM’s views feature, though all this subsequent academic research merely vindicated his views…

The opposition to the Quit India movement was natural. As was mentioned earlier, had it not been for SPM, who knows what Bengal would have looked like today? This is after the possibility of partition of the country became a reality and after the Calcutta Killings and Noakhali. Once partition was certain, what of Bengal?…

In hindsight, once the deed was done, it seems obvious that Bengal (and Punjab) would have to be partitioned. But it was by no means obvious then, and an undivided Muslim majority (even if the majority was thin) landing up with Pakistan might well have become a fait accompli. Once partition was accepted for Bengal, by logical extension, it followed for Punjab. Yet another detail for a proper retelling of history needs to be mentioned.

Even here, Dr Mookerjee intervened and convinced Radcliffe that while deciding the population balance for deciding whether to award a particular unit of area to India or Pakistan, the unit to be considered should be the thana, the police station area, and not the district or subdivision. It is on this basis that a number of districts themselves came to be partitioned; and the Krishnanagar and Ranaghat subdivisions of the Nadia district, the bulk of Malda district, the Balurghat and Raiganj subdivisions of Dinajpur district, the Bongaon subdivision of Jessore district and many other parts came to India.

Because my family had been affected by the partition of Bengal, I did know that the unit used was the thana. However, I would not have known that SPM had a hand in this. Indeed, this decision about the unit affected the lives of thousands, but I cannot recall this aspect being mentioned in any standard book on the history of India’s Independence and Partition.

SPM’s post-Independence career is probably better known, at least outside Bengal. He was inducted into the interim central government as the minister for industry and supply. Sure, he had been finance minister of undivided Bengal. But one wonders what would have happened had he been made education minister instead? As Tathagata Roy also argues, that would have been a more natural fit. However, the question need not perhaps be asked. He wasn’t going to last long as a minister, something he himself seems to have anticipated, given his differences with Jawaharlal Nehru. For the limited period that he was a member of the cabinet, the Industrial Policy Resolution of 1948 (significantly different in emphasis from the Industrial Policy Resolution of 1956) reflected his views. Eventually, in 1950, he resigned from the cabinet because of the Delhi Pact with Liaquat Ali Khan. The background to SPM’s opposition to the Delhi Pact lay in the incidents in East Pakistan.

If continuation in the cabinet was untenable, there also needed to be an alternative to the Congress party. Thus it was that the Bharatiya Jana Sangh was set up in 1951. This was just before the general elections of 1952. As a start-up, the Bharatiya Jana Sangh won three seats in the Lok Sabha, two from West Bengal and one from Rajasthan. Despite the limited number of seats, SPM was the de facto leader of the Opposition. This brings one close to the end, Jammu and Kashmir, the Dogra agitation and Article 370.

There were, as Dr Mookerjee astutely observed, two principal dimensions to the crisis in the state. One stemmed from Sheikh Abdullah’s pretensions to independence of the state vis-à-vis India. The other was the preferential treatment he gave to the Vale of Kashmir and Kashmiri Sunni Muslims as compared to the other parts of the state, principally the Jammu region, whose people he considered almost pariah.

The protagonists may have changed, but the issues, unfortunately, have not changed even in 2017.

Finally, there are the events of May–June 1953, on which there is a lot of misreporting of facts.

It is important to note here that many are under the impression that Dr Mookerjee was imprisoned for entering Jammu and Kashmir state without a permit. This is a canard deliberately spread by Sheikh Abdullah himself, as he had done in a broadcast, for reasons best known to him. Dr Mookerjee mentioned this in a handwritten note to his council UM Trivedi for drafting of his habeas corpus petition. In fact on 11 May the state government of Jammu and Kashmir issued an ordinance through the Sadr-i-Riyasat that it is an offence to enter the state without a state permit, but as the order of Prithvinandan Singh, inspector-general of police reveals, Dr Mookerjee was not (and could not have been) arrested under that ordinance. On the day of the arrest, the only permit that could have been issued was one by the Government of India and not by the government of Jammu and Kashmir. But as we have already seen, the deputy commissioner of Gurdaspur told him that the Government of India had already decided to allow Dr Mookerjee to enter Jammu and Kashmir state without a permit. This reveals a very strange and suspicious chain of circumstances.

Events got murkier when he fell ill. The illness was mishandled. Overt indifference does invariably raise suspicions about covert intent. There is, and probably never will be, a satisfactory explanation of the events.

After SPM’s death, Harindranath Chattopadhyay wrote a poem, quoted by Tathagata Roy. ‘The sun of a colossal intellect has set / The giants are departing one by one / To whom our mourning nation owes a debt.’ A colossal intellect, who was the son of another colossal intellect. However, before acknowledging the debt that the country owes to Dr Syama Prasad Mookerjee, the country must know about the man, his life and times.

(This is an edited excerpt from Bibek Debroy’s introduction to Syama Prasad Mookerjee: Life and Times by Tathagata Roy | Viking | 450 pages | Rs 599)