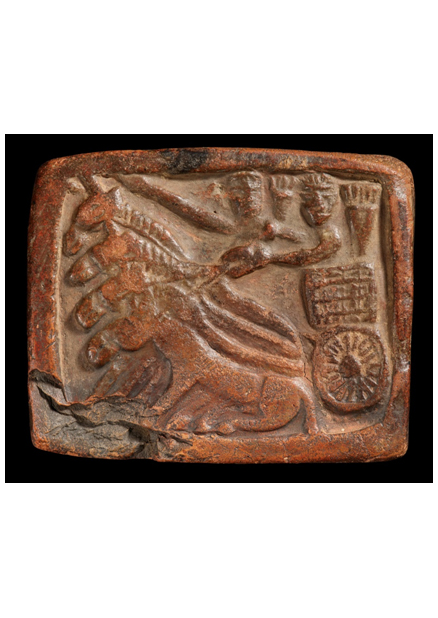 
Recently, I received an email from Jeremy Pine, an art dealer​ in Hong Kong and owner of a rare terracotta plaque (9 cm-wide). He had purchased it in Nepal many years ago. I believe there is no ban on taking terracotta out of Nepal. The plaque depicts the scene of a charioteer holding four horses, standing behind a half-chariot with a spoked wheel. There are two figures in the chariot. One is presumably the charioteer while the other is pointing in one direction. There are two quivers containing arrows (Figure 1). The back of the plaque is quite simple. Of the two holes, the central hole on the back is original, the one to the right is where the sample was taken for testing (Figure 2). Obviously, the central hole was used for hanging up the tablet.

The tablet was authenticated by Oxford Authentication using thermoluminescence or TL dating method on May 14th, 2019. The result of the ​​authentication confirms that the date of the firing was between 2,300 and 3,600 years ago, that is, 1,600 BCE to 300 BCE. This date corresponds to the end of the Indus Valley Civilisation (1,500 BCE) and the historical period (600 BCE), a period known as the Painted Grey Ware Culture, which has been associated with settlements at Hastinapura and the villages mentioned in the Mahabharata – Indraprastha (Delhi), Panprastha (Panipat), Sonprastha (Sonipat), Tilprastha (Tilpat) and Vyagprastha (Baghpat). The TL result means that the story of the Mahabharata was much older, and the tablet was used as an illustration for ritual or storytelling purposes.


Now TL dating is used to measure the accumulated radiation dose of the time elapsed since material containing crystalline minerals was either heated (lava, ceramics) or exposed to sunlight (sediments). A faint blue light glows when a small sample of ancient pottery is heated. During its lifetime, the pottery absorbs radiation from its environment, creating thermoluminescence. The older the pottery, the more radiation it absorbs and the brighter the pottery sample glows. By measuring the TL, we can calculate how much radiation has been absorbed and use this information to calculate the approximate age of the pottery.

The terracotta plaque is most likely to be the representation of Krishna and Arjuna. While the epic talks about four horses for several people, Arjuna is specifically identified with a chariot drawn by four horses named Saibya, Sugriva, Meghapushpa and Balahaka. Salya, another great charioteer, drove Karna’s chariot with a single horse named Vayujit. However, the identification of Arjuna and Krishna in this tablet is a problem. The outstretched hand is generally associated with Arjuna, who points at his grandfather and cousins and refuses to fight them. Thereafter begins the Bhagavad Gita, Krishna’s advice to Arjuna. But Krishna chose not to fight, so the second quiver of arrows could not belong to him. So, why is it there? One reason might be that Arjuna, the world’s greatest archer, may need more than one quiver of arrows for a day of battle. Alternately, when Arjuna asks Krishna what he would do if Arjuna is killed in battle, Krishna says,“maybe fire will become cold, but IF it happens, I will take up my weapons and kill Karna and Salya”. So, maybe, Krishna had his weapons with him, “just in case”? 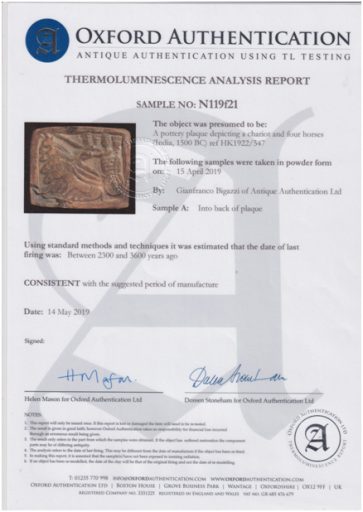 If the two figures are Krishna and Arjuna, this would be the first portrayal of the Gitopadesham scene which led to the Bhagavad Gita. The two figures are wearing Harappan-style headbands. In fact, to quote Pine, “the overall art is much more akin to Harappa than to Mauryan sensibilities.”This terracotta tablet is a very exciting discovery. It takes the Bhagavad Gita and the Mahabharata to a much earlier period than what is generally accepted.

Interestingly, BR Chopra’s TV serial Mahabharat depicts the identical half-chariot in the Kurukshetra war. This chariot resembles a similar half-chariot from Sanauli in Uttar Pradesh’s Baghpat district, excavated by a 10-member team led by Dr Sanjay Kumar Manjul, Director of the ASI’s Institute of Archaeology, Delhi. The find is said to date back to 2,000 BCE-1,800 BCE, although a final date will be available only after carbon dating results are published. Baghpat was one of the five villages demanded by the Pandavas. However, whereas the Sanauli wheel is solid, the Nepal wheel is spoked.

The spoked wheel is described in the Rig Veda and is considered to be uniquely Vedic. However, Dr BB Lal has identified a wheel with spokes depicted in a terracotta from Rakhigarhi, while Dr SR Rao had also shown a depiction of a wheel with spokes from Lothal. This means that it was already present in Harappan culture. The date of this tablet begs a question—was the spoked wheel Harappan or Vedic, or both?

The Mahabharata floats in and out of India’s consciousness. In a soapstone excavated from MohenjoDaro, Larkana district, Pakistan, there is a boy wearing bangles in both arms uprooting two trees from which emerge two human figures. The only person in our entire cornucopia of literature who does this is Krishna who uproots two trees from which emerged two cursed Gandharvas—Nalakubera and Manigriva. This is among the many popular stories in the Harivamsa and Bhagavata Purana, which establish the divinity of Krishna. Both Dr EJH. Mackay and Prof VS Agrawal have accepted the identification of the seal with the Yamalarjuna episode. 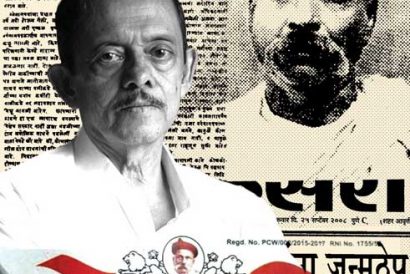 Still Waking Up To Kesari

The newspaper that Lokmanya Tilak edited is still brought out by his great-grandson. The struggle goes on