On the Right Path

Modi and the marketplace—the story so far 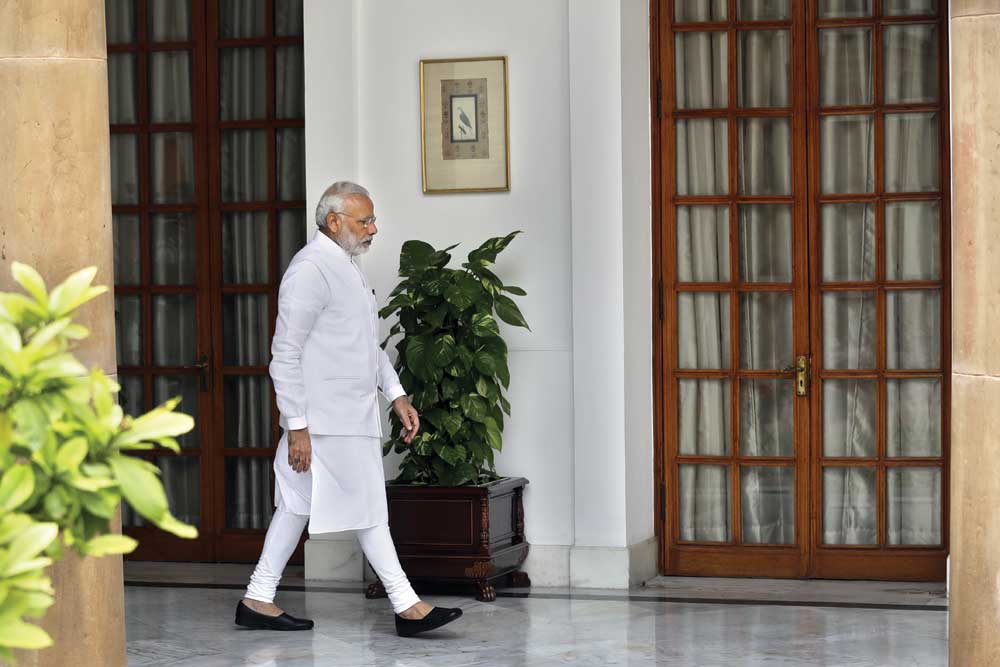 SOON AFTER THE International Monetary Fund (IMF) issued an update on the global economy in January, there was excited commentary that India was no longer the fastest growing economy in the world. The IMF had shaved 0.4 percentage points off India’s growth estimate for 2017 from what it had projected in October last year. Within no time, political opinion was mixed with economic analysis. Once the word ‘demonetisation’ was added to this cauldron, a witch’s brew was ready.

What was ignored in all this effervescence—or fury if you wish—was India’s creditable economic performance in an otherwise gloomy world. India is growing at double the rate of the global economy and is many laps ahead of the sclerotic ‘advanced’ economies of Europe, although this comparison is somewhat unfair to the Eurozone. The truth of the matter is that in the last five years, successive governments have adhered to fiscal targets that are considered necessary for the country’s economic health. The Reserve Bank of India (RBI) has maintained a conservative monetary policy almost to the point of friction with the Union Government. If one takes into account the political pressures on any government in India to spend more, one could almost say it is a miracle that the country currently boasts of high economic growth—pegged at an estimated 6.5-6.75 per cent in 2016-17—and a reasonable fiscal deficit of 3.5 per cent of GDP in the fiscal year that ends on March 31st.

The performance owes something to positive external developments such as the continuing softness in global oil prices over the past three years. This is something that cannot be taken for granted, and already there are signs that energy prices are headed higher. There is more at hand, and all of it made in India. For one, the country’s banking system has accumulated a dangerous level of Non-Performing Assets (NPAs), which refers to loans that have gone bad. The NPA level for scheduled commercial banks rose from 7.8 per cent in March last year to an alarming 9.1 per cent in September. This has dealt a double blow: on the one hand, banks are unable or unwilling to lend in fear of gathering even more NPAs, and on the other hand, companies—the drivers of growth—are reluctant to borrow more money as they are already heavily leveraged.

FROM A BROADER perspective, oil prices and bad loans are the least of the challenges. India is home to some peculiar economic problems that have defied solutions for more than half a century of innovative thinking. These constraints—and it is useful to bundle them into two categories—have imparted a distinct flavour to Indian policymaking. On one side are what could be termed political exigencies—the Government of the day has to spend a majority of the budgeted sum of expenditure just to maintain a certain social and political equilibrium. On the other side are the economic constraints—the resources that are available to any Finance Minister when he rises in the Lok Sabha to present his proposals. Successive finance ministers have been acutely aware of what they can do and what they cannot. It is against this double bind—part political and part economic—that the Union Budget has to manoeuvre itself. Usually, there is very little room for that.

Nothing illustrates this better than the expenditure pattern of some recent budgets. In 2012-13, the penultimate year of the second UPA Government, the proportion of Non-Plan expenditure in total expenditure stood at 71 per cent. Non-Plan expenses are largely accounted for by subsidies, wages and salaries of government employees, pensions, interest payments and grants to states and Union Territories, among other items. In 2013-14, this figure again stood at 71 per cent, and has since continued to hover around 72-73 per cent. In contrast, Plan expenditure—roughly the amount spent on enhancing the economy’s productive capacity—has remained less than one-third of the total for the last five years. It requires no elaboration why this pattern of spending is counterproductive for economic growth. That running expenses differ from investments in what they achieve is something commonly understood.

A cynical way to explain this would be to blame the ‘politics of patronage’ and ‘vote banks’, among a host of expressions. This is only partially correct. The operating reality is that India continues to remain a low-income country. If a government were to stop spending money on cheap food, subsidised healthcare—for what it is worth—and the provision, however imperfect, of basic goods to the country’s poor, the danger of a political upheaval is indeed real. The vast bulk of Indians are so indigent that they can hardly save any income for productive purposes. This is reflected in the number of taxpayers in India. Out of 1.3 billion citizens, there are only 12.5 million taxpayers. Claims that governments are ‘bloated’ due to hefty tax collections are routinely heard. Viewed purely from the number of taxpayers and the quantum of tax paid, however, the Indian Government is pretty anaemic. If one looks at all the major economies of the world, the ratio of taxes to output, also known as the tax-to-GDP ratio, is the lowest in India.

With such low levels of taxation and multitudes of poor people, the amount of money that can be mobilised for investment has never been adequate since Independence. China and the former ‘miracle’ East Asian economies, at the height of their boom, saved in excess of 40 per cent of their GDP. India has never touched that figure. In recent years, both the national savings and investment rates have declined, and the latter precipitously so.

In the long-run, that poses acute dilemmas for any government. This is best explained using the analogy of a fast and a slow lane first used by economist Albert Hirschman to explain reactions to high inequality in different countries. Imagine if you’re in a double lane of vehicles on the road. Suppose the lane you are in is not moving, while the other one is moving, however slowly. This will first lead to a sigh of relief; the hope is that sooner or later your vehicle, too, will start moving ahead. But in case your lane does not budge, this hope will turn into impatience and even anger. Something similar is at work in any process of economic growth that results in inequality. At first, the poor will willingly tolerate the gaps in the hope that someday ‘their turn’ will come. But if that day never arrives, a ‘clash of lanes’ is inevitable. On the imagined road, you will try and bump your way into the other lane; in the real world, it will lead to law-and-order problems and ultimately the dangerous possibility of anarchy.

This is, no doubt, a difficult situation for any government and most have been acutely sensitive to the ‘lane effect’. But there are two ways to try responding to it. One is to continue with the expenditure pattern that is usual in budgets, reducing them to the level of an annual ritual. The other is to understand the constraints and try out innovative ways to at least shake this damaging equilibrium. The former path was tried by the UPA for almost a decade: ever large sums were committed to ‘social welfare’ schemes that did precious little towards the actual welfare of poor Indians, and worse, weakened the Indian economy to withstand external shocks like high oil prices or the danger of protectionism that is now so evident in the world.The other path, being tried now by theBJP, even if its final results remain unknown at the moment, is not to ignore the poor and instead bring them into the mainstream. By the nature of the constraints highlighted above, it requires ‘extra budgetary’ initiatives. There is only so much that can be redistributed by using budgetary means: if well over two-thirds of the budgetary resources are already committed on an annual basis, no Finance Minister can do more.

The right way to fix this problem is to slowly withdraw subsidies and reduce Non-Plan expenditure, and, in tandem, spend more money on productive activities at the level of individual citizens. Broad hints of action in that direction are already at hand. The special emphasis on skill-building, the effort to impart a technological push to the Indian economy, and the encouragement to entrepreneurs who leverage technology to create new products and services, the so-called ‘startup sector’, are all one aspect of this change. Much has been written against these themes and the point about technology has been subjected to criticism and derision by critics, mostly on the Left. It is worth pointing out that at another point in Indian history, when a technological fix was sought for another economic problem—that of food shortages— critics of the same stripe laughed at the possibility of the Green Revolution delivering the goods. As they say, the rest is history.

Another broad hint along these lines is provided in the Economic Survey released on January 31st: the debate on Universal Basic Income (UBI). While UBI—a lump sum payment to all Indians irrespective of their income level—is beyond the means of any government, a slow shift toward a UBI by targeting the poor and handing them a sum of money every month is certainly feasible. But for UBI to succeed, the plethora of schemes and subsidies that currently plague India’s public finances has to end. That is easier said than done. For one, India is a federal country with dozens of overlapping jurisdictions. Without some sort of agreement between various units, this transition is not possible. For another, India is also a highly competitive political system that makes it impossible for one party, however earnest its efforts may be, to walk away with the ball. Unless there is a broad political consensus to end the reign of subsidies, UBI is likely to remain a pipe dream.

Ultimately, the trick to solve all these pathologies of an ‘intermediate regime’ is to somehow push the Indian economy to a higher growth trajectory. That goal has eluded policymakers since the days of Jawaharlal Nehru—until now, that is. Whatever one may say about notebandi, ‘Make in India’, the impetus to technological modernisation, there is some movement in India after a decade of quiescence that was based on shrewd political calculations but did not push India to a higher level of development. 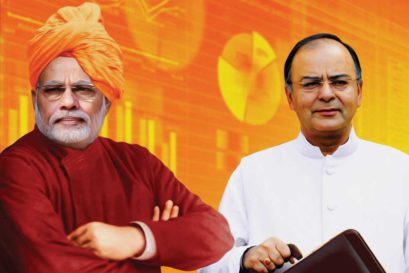 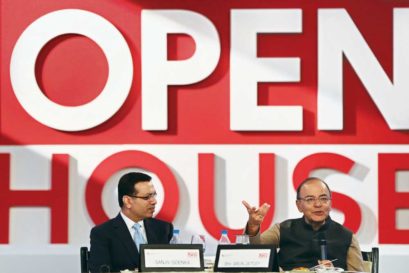