When Cows Come Home to Die 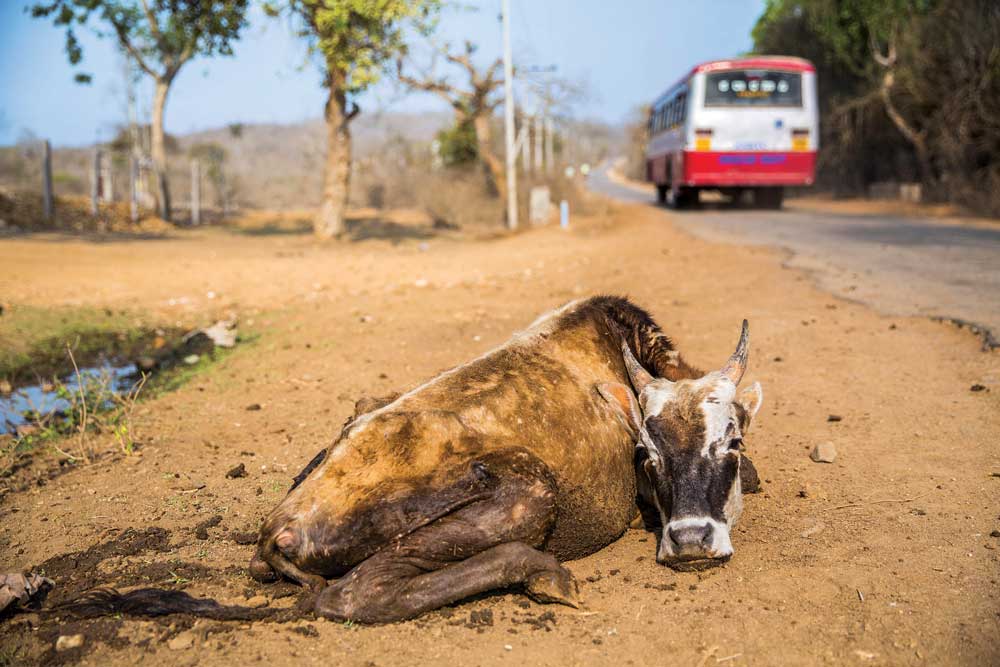 THE DROUGHT-BLIGHTED world of 50-year-old Masiamma has a brutal kind of beauty. Chokkanalli, a tiny Irula settlement bordering Mudumalai National Park in Tamil Nadu, not far from the Ooty- Masinagudi tourist corridor, is part of the Sigur plateau in the northern Nilgiri hills. It is no one’s idea of a holiday, its stark Ballardian landscape clothed in the browns of summer. The village and the forests around it are in the midst of a profoundly terrifying dry spell. Prickly pears past their prime and limp bougainvillea are the only things that thrive on the stripped earth. The drought has laid waste to livelihoods here, leaving the 40 households that have long since given up farming–the hamlet is part of an elephant corridor and agriculture isn’t a viable option— bleak-eyed and broken-hearted. Their main source of income is their cows, born in their homes, defended with blood, and now stunted by scarcity. Over two-thirds of their 500-odd cattle are dead. The ones that remain, all skin and bones, are dead behind the eyes. When the cows go out to graze, the women send them off with a calm, kindly gaze, knowing they may never return. They try to keep busy, pitting and cleaning tamarind, combing their hair to look their best at the temple festival that is underway in the neighbouring village of Bokkapuram, and wrapping up flavoured rice for the menfolk who set out every day looking for work in the plantations only to return empty-handed. The villagers watch a lot of TV these days, says P Saroja, the wife of the local priest, sitting in the shade of her verandah with her teenaged daughter. “Who would want to bring children into this world? The TV is our only source of happiness,” she says. “There is nothing to do. The government still owes us thousands of rupees for the [MNREGA] work we did last year. The cows are dying and the money we make selling milk and dung—Rs 30 per basket—is also dwindling. It feels like our lives are being blown away in the wind.”

Masiamma is not yet ready to give up. She locks her bright blue door behind her, a plastic pot filled with water hoisted on her hip, an aluminum trough with hay dangling from her left hand. Seven of her 11 cows died in the past three weeks and one has collapsed in the woods, too weak to walk home. “It has been in the forest for three days. It can only walk a few steps every day and will die if I don’t bring her food and water,” she says. “It has birthed just one calf. It is too young to die.” In a pink polyester sari, a towel draped over the head rising in a plume behind her, Masiamma walks nearly two kilometres—we trail her through the dirt, heat-sapped and exhausted—until she reaches the edge of the forest where the cow sits slumped in the dappled shadow of a tree. Beset by dehydration, it slurps up the water in a jiffy. The small bundle of fodder is not nearly enough, but it cost Masiamma Rs 25. She knows it is a matter of time before she loses this cow to starvation or to a predator attack. “Last night at 2 am, two elephants came into the village looking for water. All the animals are hungry and thirsty. I only hope the cow regains its strength and returns home before something attacks it. It cannot even fight back,” she says, hurrying back to the village, where her two remaining cows and a calf are waiting for their meagre lunch.

This year, with over 60 per cent deficit in rainfall, all water holes in the forest have dried up

LAST YEAR, TAMIL Nadu received only 543 mm of rain as against its annual average of 920 mm, the lowest recorded since 1846. Most taluks in Karnataka are grappling for water and even Kerala is in the midst of the worst drought in a century. It is no surprise that the deciduous forests of the Nilgiri Biosphere Reserve are dry as paper, the ground a stagnant yellow-brown tract that can scarcely support the lives of over 100 species of mammals that depend on it. Deer amble into the burnt-down fireline like mythical spirits with antlers. Herds of elephants have upped and left for Bhavanisagar in search of water. Trees are bare sticks poking at the sky. “It is not as alarming as it looks. For four months every year, the forest is dry and the elephants and the deer lose weight during this time. The weakest of them die—it is a natural culling—and the rest learn to adapt to an increasingly drier climate. This year, however, with over 60 per cent deficit in rainfall, all water holes in the forest have dried up and we have had to employ water tankers to fill them regularly,” says Srinivas Reddy, field director, Mudumalai Tiger Reserve. The 32,000-hectare expanse of Mudumalai, along with the larger Bandipur and Nagarhole National Parks, Wayanad Wildlife Sanctuary, Silent Valley National Park, Mukurthi National Park, the upper Nilgiri Plateau, the Siruvani hills and Nilambur together constitute the 5,500-sq km Nilgiri Biosphere Reserve, one of the most ecologically significant zones in India. Drought may be the new normal for the animals of the reserve, but the people living on its fringes, largely dependent on the forest, find their lives receding into poverty with each failed monsoon. Last month, a raging fire levelled over a thousand hectares in Bandipur and claimed the life of a forest guard. The same day, another blaze consumed a small hill in Mudumalai. Both, say forest officials, were started by disgruntled tribals. The forest department employs a few hundred tribals as fire watchers, but restricted access to the forest and its wealth of produce, coupled with the dearth of water and pasture land, have made it hard for most communities to eke out a living. “We are paid Rs 6,000 a month to look out for fires, but there are thousands without a job or any way to make money,” says K Bomman, 25, an eco watcher from Masinagudi who is into his fourth year of service with the forest department. He is stationed by the road to Theppakadu along with three other watchers whose primary job is to look out for cigarette butts that could well start a fire. The trench behind them, now covered in dry underbrush, is actually a wetland, Bomman says.

Last night at 2 am, two elephants came to the village looking for water. All the animals are hungry and thirsty

H Natarajan, 56, a farmer from Vazhaithottam near Masinagudi, was an eco watcher for two decades before he started growing peanut, ragi and pulses on his father’s agricultural land—about three acres—in 2004. There were some good years, but farming seems like a doomed prospect now. The Moyar river that drains the plains along the interstate border is reduced to a doubtful stream. Untimely rains, long dry spells and a lack of awareness and resources among small farmers to try new methods of irrigation could spell the end of agriculture in the drier regions of the Nilgiris, he says. “The government offers drip irrigation subsidies only to landowners. But most people here, especially SC and ST communities, farm on common land without a patta,” he says. The only source of livelihood for small farmers is livestock, and this year, with pasture land drying up, more than half the cattle population of Masinagudi has vanished, Natarajan says. “Never have we lost so many cows.”

SHRINKING COMMON PASTURES across south India are no more alarming than the government promoting a transition to the stall fodder system, says GV Ramanjaneyulu, an agricultural scientist with the Centre for Sustainable Agriculture, Hyderabad. “All government schemes are focused on stall-based rather than grazing-based options. Feeding grains to livestock puts extra burden on farmland and increases the ecological footprint of animal husbandry. Moreover, the Western livestock system, where animals are crammed into small spaces, makes them susceptible to disease, necessitating antibiotics and growth hormones,” he says. The cumulative effect of the rainfall deficit over the past three years will be hard to shake off, he says, especially for farmers dependent on small numbers of milch cattle. “The stall-based system is a death knell for the small farmer.”

Subsidised dry fodder depots set up by the governments of Tamil Nadu and Karnataka are few and far between. “Milk prices are not rising despite the drought and higher cost of inputs—up by over three times in the past decade. In the absence of pasture land, I have to spend Rs 260 for a bale of hay, which can feed four cows for a day. Small farmers cannot afford this. The government, instead of trying to be a supplier of feed, should extend financial assistance to marginal cattle owners,” says Karthikeya Sivasenaapathy, a native cattle evangelist and Managing Trustee, Senaapathy Kangayam Cattle Research Foundation, Tiruppur. It is extremely difficult to estimate the number of milch cattle in south India, let alone guess the number of deaths from drought, he says. The 19th livestock census conducted in 2012 puts the number of cows in India at 122.9 million, with Andhra Pradesh, Telangana, Tamil Nadu and Karnataka accounting for a little under 15 per cent of the population. It also indicates a preference for high-yielding exotic breeds which, says Sivasenaapathy, are far less likely to survive dry spells.

Across the border, in Karnataka, the 16 villages in the vicinity of the Bandipur forests, hardened though they may seem from enduring arid summers year after year, are headed toward a dark future. Their cattle, walking the stubborn earth, are ghosts of their former selves, many of them collapsing on the streets and dying prematurely. En route to the village of Mangala, we meet 75-year- old Javraiya and his famished cows lapping at a leak in a water pipe by a field. He lost four of his cows just last week and shakes his head when I ask him how many of the remaining 20 will survive the summer. “I ran a dairy until last year, earning at least Rs 8,000 a month. Now, I have to buy milk,” he says. The men of Mangala, home to over 1,000 healthy cows until a couple of years ago, now work as coolies in resorts and plantations nearby. “Youth no longer want to stay on in the village. In most of the 300 houses here, you will only find old people, living at the mercy of the rain. All the borewells in the village have dried up. We have not sown anything this year and with the cattle dying, we can no longer support ourselves,” says Gayappa Devar, an ageing resident.

In Cheluvarayanapura, a hamlet of about 25 houses near Mangala, women carefully fill buckets at the common tank, spilling not a drop. There is enough water to drink, but no pasture, says B Kaliamma, 40, tearing up as she talks of her three cows that died two weeks ago. She only has one calf left, besides some fowl, two young goats and two acres of fallow land. She wants her nine- year-old son Anand and eight-year-old daughter Harini to work in the city when they are older, she says. “Our villages are dying. The cows are just the first ones to go.”