South Korea wants to make the grandest Winter Olympics ever. Lhendup G Bhutia in Pyeongchang reports on the preparations 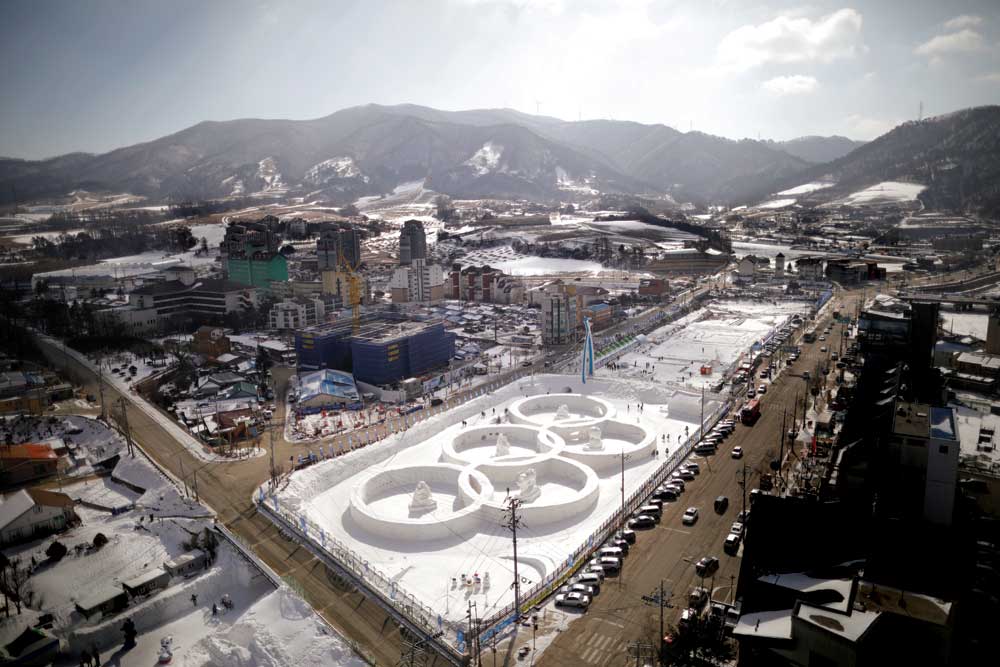 WE STEP OUT of the bus into the cold winter sun, somewhere between Seoul and Pyeongchang County. The temperature this morning has been hovering around -13º Celsius. “What is diss?” asks my Kazakh co-passenger. He pulls down his hoodie whose long untrimmed strands of fur at the edges gives him the distinct appearance of a withering sunflower. He punches his fist into the ground, retrieves a clump of snow, and crushes it. “Diss is summer,” he declares.

You can’t blame him. In Astana, where he hails from, winter means about -50 º Celsius. “Another minus 10 with the wind,” he says. “What you do? It is life, you know. You drink vodka raw [he means neat]. Then you go outside. Two minutes, you become baby.” He slaps his face as he says this. “You back, drink vodka raw, then you go outside become baby again.” He slaps his face again. It takes me a while to realise that he means the cold outside sobers you out of inebriation, like a baby.

Behind, the doors of the bus open again. “Masha’Allah, masha’Allah,” a female passenger from Saudi Arabia is screaming. Just this morning, she told us she has worn five layers of clothes to protect her from the cold. Now, as she runs, a sixth layer appears, a shawl, wrapping itself around her, making her look like a moving tent. “Masha’Allah! Masha’Allah!” And the hotel’s automatic sliding doors close behind her.

The Kazakh passenger, unlike the others, is unimpressed with the cold. “I toilet,” he says and trundles into the hotel’s restroom. He has a habit of removing verbs he thinks unnecessary from sentences.

We are all here from different parts of the globe on the invitation of the Korea Tourism Organization to witness South Korea’s preparations to host the Winter Olympics, or PyeongChang 2018, as it is being called, in February next year; and there is considerable excitement. “It will be the biggest, grandest Winter Olympics ever,” Yeo Hyung-koo, secretary general of the PyeongChang Organizing Committee, declares at the onset of a press conference in Pyeongchang.

ALL AROUND, IT appears, this modern country is undergoing upgradation. New impressive highways have come up and test runs done for high-speed railway services that take people from the international airport at Incheon—at one end of the country—to the venues in a matter of two hours. There are new stadiums, new hotels, a new app (GenieTalk) that translates Korean into eight languages, even new restaurant menus in a variety of foreign languages. The government is also going to demonstrate the country’s technological prowess with the rollout of a 5G mobile network around the venues. “We will combine the IOT [Internet of Things], AR (Augmented Reality), VR (Virtual Reality) with the games… This Winter Olympics will be an IT (Information Technology) event also,” Hyung-koo says.

But for all the enthusiasm, there is a spectre of North Korea hanging over the tournament. A large quantity of tickets remain unsold. I make my way into a press conference addressed by Hyung-koo and Jeong ChangSoo, CEO of Korea Tourism Organization. The two sit behind two soft toys, Soohrang and Bandabi, a white tiger and an Asiatic black bear, the mascots of the Olympic and Paralympic Winter Games. Hyung-koo and ChangSoo write down each question thrown at them in their notepads, and consider them for a while before answering.

They aim to sell at least one million of the 1.18 million tickets, 70 per cent of them for Korean nationals and the rest for foreign visitors. But so far nearly one third of all tickets remain unsold. “We have managed to sell 58 per cent of the tickets for foreigners. And 30 per cent for domestic,” Hyung-koo says. “But we are confident. We see rapid sales in Korea usually two months before an event. Then there will be group purchases from corporates. And right now, with the torch relay going around, there is a growing interest in the event.”

All around, South Korea is undergoing upgradation for the games. There are new stadiums, new hotels, even a new App that translates Korean into eight languages

When South Korea won the contest to host the 2018 event seven years ago, North Korea appeared back then to be a little more than an inconvenience. There was even talk of getting the two countries to co-host the event. But that was then. Now military tension between the neighbours has rarely been this high since war on the peninsula ended in an uneasy truce back in 1953. Just days before the press conference, North Korea successfully tested a new type of intercontinental ballistic missile (ICBM), regarded as its ‘most powerful’ yet that can reach any part of the US. South Korea responded by carrying out fire drills and launching one of its own ballistic missiles. Most of the venues for the event lie only about 100 km from the border with North Korea. A few countries have expressed concern over sending their athletes to the event. The British team even has an evacuation plan ready should tensions increase. Hyung-koo and ChangSoo, however, insist that all countries will participate.

The neighbour to the north also has a penchant for attempting to throw a spanner into events that put South Korea in the global spotlight. During the 2002 World Cup, for instance, North Korea sank a South Korean naval vessel. And just before the 1988 Olympics, it bombed a Korean Air flight, killing all 115 passengers on board. And then there is the issue of the similarity of names. “Foreign tourists hear ‘Pyeongchang’ (the venue of 2018 event), and they think ‘Pyongyang’ (the North Korean capital),” a tour guide based in Seoul says. “No no, we have to tell them, they are two different places. You are safe at Pyeongchang.” To deal with this confusion, South Korea has even added a capital ‘C’ to the name of the games (PyeongChang 2018). “I get asked this question about security a lot,” ChangSoo says. “None of this [provocation from North Korea] is new… Tension is there, but it is between the armies. There is no terrorism against civilians.”

The impeachment of South Korean president Park Geun-hye earlier this year and allegations that one of her advisors, Choi Soon-sil, made illicit gains from Olympic-related contracts also seem to have had an effect. “Last year’s political situation [which led to Geun-hye’s impeachment] was unexpected. The public interest is a little bit distracted right now,” Hyung-koo says. “But we are seeing robust ticket sales now.”

All this is a shame, really, because South Korea is something of a futuristic utopia. In the capital, you find trash bins that ask you to fill them with garbage, automated lights in hotel rooms that anticipate your every move, and smart toilets with control panels bearing nearly 20 buttons, some of whose functions aren’t apparent until one encounters them. I go to a theatre one night at Daehak-ro, Seoul’s Broadway, to find a multiplex kind of building where different plays are being performed on various stages. And I sit in at a musical—an intimate performance with a small cast, but incredibly lengthy, close to 150 minutes without a break—to find a tablet attached to my seat, which allows me to follow the entire play with subtitles of my choosing.

ALTHOUGH SOUTH KOREA may not spring immediately to mind when one thinks of winter destinations, the country’s winter landscape is impressive indeed. There is an abundance of snow throughout the peninsula at this time. And tall and gentle slopes, sometimes in clusters, which appear to go on and on. The ski resorts have the size and planning of entire towns.

The Taebaek Mountains, often also called the Korean Alps, run through the eastern side of the Korean peninsula, from Wonsan in North Korea all the way down to Busan in South Korea. The eastern parts of the mountain range fall steeply into the sea. But to the west, these slopes are gentle. At its highest, Seoraksan in Gangwon-do in South Korea, the Taebaek range reaches 1,708 metres above sea level.

Many ski resorts have hills and slopes within their premises. Skiers and snow- boarders can rent gear here and ski down one of the pistes. There are ski instructors too in most of them. Some of these resorts also have other leisure facilities like equestrian clubs, water and golf parks, pubs, banks and indoor play-centres.

On one afternoon, after a visit to an extremely cold ski resort, we drive through the winding roads of the Taebaek to reach Gangneung, a sea-side city at the eastern edge of South Korea. Behind us are the cold mountains. And in front, the icy blue waters of the Sea of Japan, a name which is objected to by South Koreans who prefer to call it the East Sea. Gangneung will host all the ice events of the Winter Olympics. The cold winds that blow from the sea are even chillier than what we experienced, a few hours ago, at the ski resort. As we reach a restaurant by the sea, the tour guide rubs her hand conspiratorially as she orders seafood hot- pots for all of us.

A silence descends upon the entire gathering of about 40 of us. For, inside each of our bowls, amid the hot soup, pushing out the noodles, shrimps, clams, seaweed and other offerings of the sea, is the pièce de résistance: wriggling abalones. Our lunch is alive. The abalones have just been dropped into our hot-pots minutes ago.

I resist the temptation to spoon them out to safety. It is such a cold windy day, after all. I deal instead with the other dead contents of my bowl, until eventually I give in. I mumble a short prayer, spear one with a chopstick, now not really wriggling with much life, before popping it into my mouth. At some point, I throw caution to the cold winds breathing out from the disputed Sea of Japan and have a go at an abalone that’s quite clearly alive. It tastes warm and it wriggles vulgarly in my mouth, like an adolescent attempting his or her first French kiss, eager to give the entire tongue.

“Good I miss diss,” says my Kazakh co-passenger as he watches a video of the meal on my phone. We are smoking cigarettes outside in the cold night. He had to be somewhere else, he says, so he missed the lunch. What did you eat, I ask.

He looks at me from the ring of sunflower petals-like fur around his face, and says, “I hamburger.”