The Return of God

The eleventh century Dholkal Ganesha rises from the ruins in the Maoist heartland. Rahul Pandita writes from the site of a vandalisation in Dantewada, Chhattisgarh 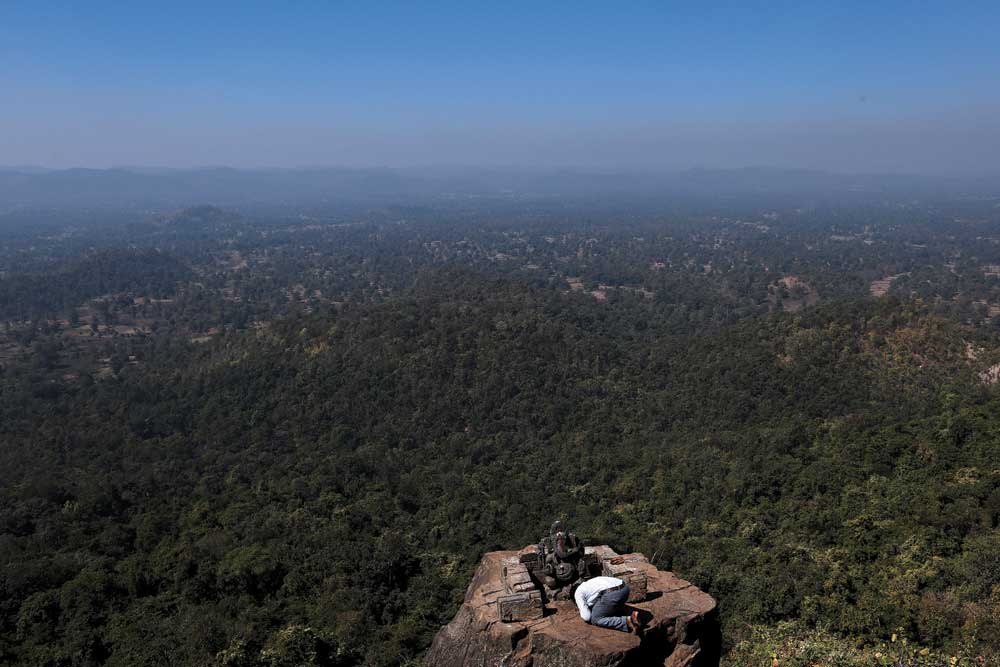 ON THE MORNING of January 24th, a group of visitors began its ascent to the Dholkal hill in Chhattisgarh’s Dantewada district. The hill is situated in a dense forest and, on top of it, on a flat boulder, is an ancient, eleventh-century idol of Ganesha. From Dantewada town, one has to first reach Pharaspal village, about 25 km away. After a few kilometres, the road turns into a dirt track, leading to the foot of the Dholkal hill. It takes an arduous trek of about an hour to reach the hilltop to get a glimpse of the idol.

But that morning, when they reached the top, the visitors found the idol missing. They thought that perhaps they had reached the wrong spot. But on its left, they could see a red flag marking the presence of a sun temple. The temple, hidden from view till one climbs up, is believed to have a idol too which was stolen—nobody remembers when. The Ganesha idol should have been on the boulder, which now lay bare in front of them.

The group climbed down immediately and alerted a party of the Central Reserve Police Force stationed in a village nearby. Dantewada is one of the hotspots of left-wing insurgency and is a part of the Dandakaranya Special Zone Committee, which has remained a bastion of the Communist Party of India (Maoist) for more than three decades. As the news of the missing idol spread, the district administration sent a search party to the top of the hill. It found that the idol had been pushed down a steep cliff on its rear and had broken into pieces.

Two days later, the renowned archaeologist Arun Kumar Sharma, who serves as the archaeological advisor to the Chhattisgarh government, received a call at his residence in Raipur, over 400 km away. The same evening, he met the Chhattisgarh Chief Minister, Raman Singh, who asked him to help restore the idol. A few hours later, Sharma, 84, was in a government car; he travelled all night to reach Dantewada the next morning.

Sharma knows Bastar very well. He has excavated several sites in the region (Dantewada, once part of Bastar, was made a separate district in 1998). In 1982, when he began exploring the region, Maoist guerrillas were new there as well. Two Maoist squads entered Bastar for the first time in June 1980 with the aim of establishing a rear base here. Within a few years, they had made deep inroads in the area. During his searches, Sharma remembers bumping into Maoist squads who would apprehend him and question him. Sharma was not new to engaging with insurgents. As a young archaeologist working in Manipur in the 60s, he had often negotiated with insurgents to let him continue his work. “I told the Maoists that my interest was only in saving the culture of Bastar. Once a squad persisted, and I told them they could take me hostage for as long as they wanted; I told them that my family would have no interest in saving me,” says Sharma. Eventually, with the help of Maoists, Sharma was able to find several ancient sites in these dense forests.

The Dholkal Ganesha, though, remained unknown to the outside world for a very long time. In 1936, the idol is believed to have been spotted by a British geologist, Crookshank, while he was surveying the region. But afterwards, especially after the area became a Maoist stronghold, the idol slipped out of public memory. It is only in 2012 that a local journalist climbed up the Dholkal hill and took pictures of the idol that soon went viral on social media. According to experts, the idol was carved out of a Dolomite rock in the eleventh century CE during the time of Chhindak-Nagvanshi rulers of Bastar. Till some point, it must have had a mandapa (pavilion) supported by pillars on four sides. Remains of these pillars are strewn around the site.

After Sharma reached the site along with two associates— Prabhat Kumar Singh and Praveen Tirkey—he set to work immediately. After examining the largest piece of the idol, Sharma came to the conclusion that someone had hit it repeatedly with a hammer-like object. Even the boulder on which the idol lay had developed cracks.

The first challenge for Sharma and his team was to recover all the broken parts of the idol. Several search parties were pressed into service. It took them hours to recover one piece after another. Having recovered these, Sharma arranged them on a platform of sand to see which part fit where. Towards the end, one ear of the idol was still missing. Sharma announced a cash prize of Rs 10,000 for anyone who could find the missing ear. The next day, it was finally found by a police inspector. In all, 57 pieces of the idol were gathered.

Sharma and his team worked non-stop for four days. The cracks in the foundation were filled with Araldite adhesive. After a wait of 24 hours, the restored idol was brought and re-affixed. Prior to that, the Chhattisgarh government had asked Adivasis in Pharaspal and adjoining villages if they wanted the Ganesha idol back or if they would like the government to keep it in a museum. The villagers vehemently said they wanted it back in its original place. The reinstallation ceremony took place on February 1st, which also happened to be Basant Panchami. Thousands of villagers from neighbouring villages arrived at the site and the event took the shape of a festival. There was a feast of chicken and goats. The villagers danced all day and returned home towards the evening—after which it’s considered unsafe to venture out, given the significant presence of Maoists in the area.

But who broke the idol? There are no clear answers. Government officials are of the opinion that it is the handiwork of Maoists. “After it began to attract a steady stream of visitors, the Maoists felt threatened and pushed the idol down the cliff,” said a senior police officer. Arun Kumar Sharma believes that Maoists of Adivasi origin would never do that. “If the Maoists have done it, then it has to be non- Adivasi cadre,” he says. According to Sharma, Ganesha worship is an intrinsic part of tribal culture—something which the Maoist leadership wants to wipe out. He points at the presence of ancient Ganesha idols in Barsur, about 60 km from the Dholkal foothills. “Sculpture evidence in Sirpur [about 80 km from Raipur] suggests that this region was a breeding ground for elephants,” says Sharma. In Sirpur, Sharma says they have found a Buddha vihara that is four times bigger than Nalanda. “I can say with certainty that Sirpur was more developed than the town of Harappa in the Indus Valley Civilisation,” he says. The Buddhist spiritual leader Dalai Lama has shown a keen interest in Sirpur and has visited it twice; in 2014, he had meditated inside one of the caves at the site.

Yet, there are others who think that artefact thieves should be held responsible for what happened.

From the top of Dholkal hill, one can see a vast expanse of greenery dotted with small villages in a forest where the Maoist writ runs large. The security forces are now gradually beginning to extend their operations to these parts to drive away the Maoists. In the afternoon, a sharp sound rises from a village below. It is the village headman blowing a todi (buffalo horn) to send a message to neighbouring villages. In the absence of a wireless telecom network, the Adivasis of this region still rely on centuries-old modes of communication.

At the site itself, the damage to the idol is only evident from close quarters. At a time, only one person can climb up to the boulder. The tip of the idol’s trunk is gone. But it still looks magnificent; the God looks serene with a chain engraved across his torso. “It is symbolic of a man’s need to chain the evil in him,” says Sharma.

The news of damage to the idol has travelled far, attracting droves of visitors. “The villagers have promised that they will look after their God,” says Sharma.