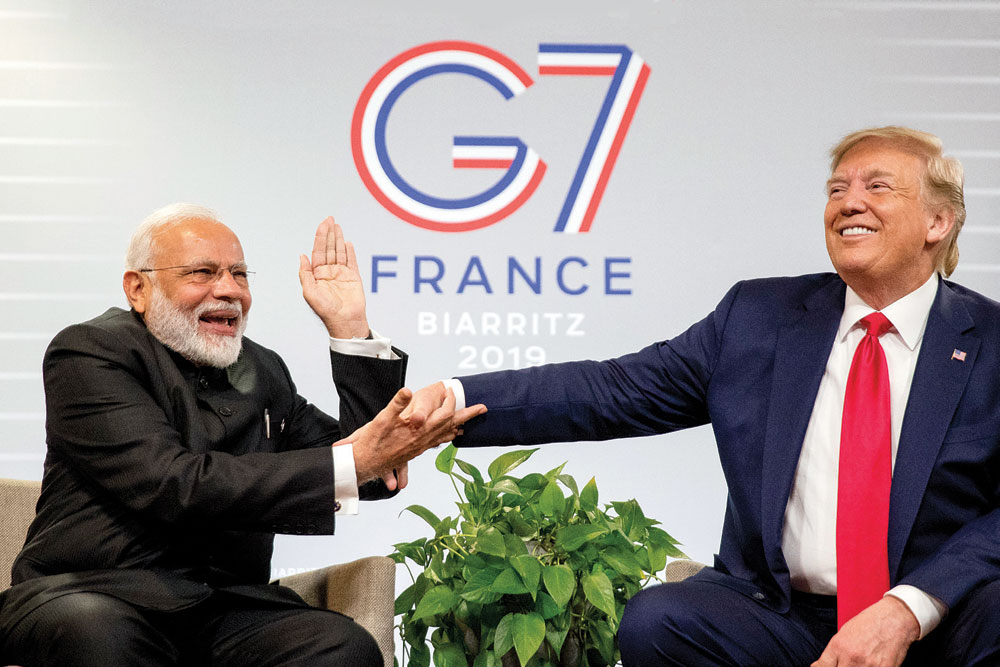 
BEFORE HE RETURNED to attend the G7 Summit at Biarritz on August 25th, Prime Minister Narendra Modi had already paid a state visit to France (August 22nd-23rd) and flown down to the UAE (August 23rd-24th) and Bahrain (August 24th-25th), all itineraries on the same trip, in that order, planned no doubt as per constraints of time and compulsions of schedules, albeit with undeniable room for a smirk or two exchanged among the never-believers.

So, when French President Emmanuel Macron issued the unambiguous statement—after France had shown its hand in shielding India behind closed doors at the UN Security Council—that Kashmir is a matter to be resolved between India and Pakistan, with no involvement of another party, there was little evidence of the never-believers having taken note. Later, US President Donald Trump, after meeting Modi on the sidelines of G7 on August 26th, said that the Prime Minister feels he has the situation under control and that he himself (Trump) thinks India and Pakistan could sort things out. After blowing hot and cold, that’s as clear a stance from Trump as we are likely to see for now. Modi, incidentally, had asserted in Trump’s presence that all India-Pakistan issues are bilateral. The two other states Modi visited had already given India solid support on Kashmir: the UAE had said, unambiguously once again, that Kashmir is India’s internal matter while Bahrain had cracked down on Pakistanis protesting New Delhi’s abrogation of Article 370 and alteration of Jammu & Kashmir’s status.

Kashmir per se could never have been the top item on the Prime Minister’s agenda nor on the agendas of his hosts. Yet, this was Modi’s big post-Kashmir trip, enabling us to gauge the broad patterns and subtler lines of the international fallout of August 5th. After all, there is a difference in significance between how shrilly the foreign media cries and what the governments of the states said media belong to do. In Paris, Abu Dhabi and Manama, the writing on Kashmir was on their respective walls.

When Modi came to power in May 2014, foreign policy, despite the best intent and efforts of his predecessor, was moribund. But very soon, we had foreign policy alive and kicking again. So if Modi’s first term was about reclaiming, resuscitating and redefining foreign policy, his second term, logically, had to be about consolidation, repair (wherever needed) and still newer discoveries. The last is important. We live in a world where the givens of a decade ago have all, fundamentally, changed.


It was a singular, albeit less remarked upon, achievement of Modi’s first term that Indo-French ties were foregrounded in New Delhi’s foreign policy

Delhi’s strategic partnership with Paris turns 21 this year. France had been seeking closer ties with India since Francois Mitterrand, although staunch French backing for India surfaced for all to see after Pokharan II. Yet, never failing to see the world through the residual ideological tint in its glasses, India couldn’t capitalise on French overtures. It was a singular, albeit less remarked upon, achievement of Modi’s first term that Indo-French ties were foregrounded in Delhi’s foreign policy. Why was this important? Because no country in the Western hemisphere appears to have a better understanding of India’s emphasis today on multi-alignment and new multilateral coalitions against common threats than France. In fact, France was there long before India, given its insistence on being different within NATO. In framing the post Cold-War geopolitical order, India could not ask for a more suitable partner.

Modi’s state visit to France covered, among other things, defence, nuclear energy (if Jaitapur is to be revived, there’s little time to lose), maritime cooperation, counter-terrorism, cyber security, the Solar Alliance (reports of India’s slowdown in renewable energy may soon raise concerns if not timely addressed). But the joint statement’s roadmap on cyber security and digital technology are the clearest indicator of the link drawn by Modi and Macron between the present and the future. Where India needs to deliver though, notwithstanding the chicken and egg logic, is on defence production without which there can be no worthwhile defence collaboration despite technology transfer.

It was an Israeli Prime Minister—the first to visit India as head of government—who had played a personal role in encouraging India to aspire to a position on the world stage above where it dared to see itself. Today, years after urging the US to dehyphenate India and Pakistan, we have finally undertaken our own dehyphenations. Nowhere is this better demonstrated than in our dealings with the Middle East—Israel and Palestine on the one hand and Israel and the Arab states on the other. India is one of the very few states successfully balancing their ties with Israel, the Arab states and Iran.

In the UAE, Modi was conferred the Order of Zayed, the state’s highest civilian honour, while Bahrain conferred its King Hamad Order of the Renaissance on the Prime Minister. India and the UAE, as has been said, are enjoying a ‘golden era’ in their trade partnership (the UAE is India’s third-largest trade partner, with bilateral trade touching $60 billion in 2018-2019) which includes oil (the UAE is the fourth-largest crude exporter to India), infrastructure, aviation and tourism. Coupled with the strategic partnership—defence and security, maritime and anti-terror cooperation—this is a bilateral relationship overhauled in the last few years. The UAE is critical to understanding Modi’s outreach to Muslim-majority nations in the region who see in India a strategic counter to the China-Pakistan axis, or nexus, they are increasingly uncertain about. Dubai, for instance, fears the impact of Pakistan’s Chinese-built Gwadar port on its Jebel Ali port, whose Free Zone incidentally hosts 800-odd Indian companies.

The six states of the Gulf Cooperation Council—with Bahrain, Modi has visited all six—contribute about 40 per cent of India’s oil imports and constitute India’s extended neighbourhood to the west. But what’s remarkable is how Delhi’s ties to them can no longer be defined as a transactional hydrocarbon relationship. India’s Middle East policy of old, whereby it saw itself as ‘more Arab than Arab states’ yet failed to anticipate and understand the Arab uprisings, has now been replaced by an insight which can see through that upheaval and realise that these conservative kingdoms had little interest in ideology, who have now undertaken social, political and economic reforms of their own that call for unflinching Indian support. Today, these states are even addressing the many concerns of their large Indian diaspora.

It took India a decade after Ariel Sharon’s 2003 visit to proclaim to the world that it had no reason to be shy of its robust ties with Israel. It took India still longer to understand that beyond rhetoric, it had neglected the Arab world, and that the old contours of its policy in the region had long ceased to hold. It took India a decade-and-a-half after 1998 to grasp the significance of France. Modi has not only corrected the course but, in another break with the past, has taken ownership of that course correction.