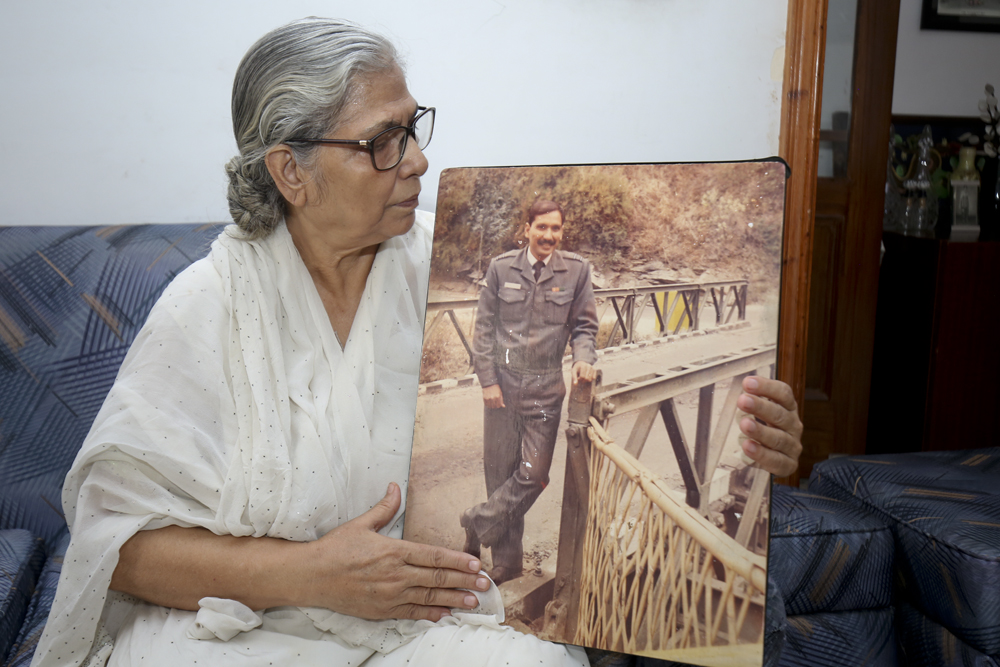 
From her school days, says Nirmal Khanna, her parents knew that they will have to look for a soldier as husband for their daughter. “I was heavily into sports and was also with the National Cadet Corps (NCC),” she says. Nirmal, who is from Jammu, was married to Ravi Khanna on September 10, 1978. He was from Amritsar and was an officer with the Indian Air Force. “He was everything I wanted in a husband; he was a soldier and he was very tall,” she says.

Right after their marriage, Ravi was posted in Srinagar. Nirmal joined him there – she worked as a teacher at a government school in Srinagar. In 1984, Ravi was transferred to Tezpur, Assam. Nirmal took long leave from her job to be with her husband. In 1987, Ravi was selected for Staff College training and then posted back to Kashmir Valley. “I told him that he should ask for a posting in Jammu or Udamphur instead. But he smiled and asked me to have faith in God,” recalls Nirmal.

In June 1989, Nirmal joined office in Srinagar. He first stayed in the officer’s mess and when Nirmal joined him later, they took a rented accommodation in Srinagar’s Rawalpora area, close to the Air Force Station.

In few months, Kashmir would come under the grip of militancy. By January 1990, the situation had worsened a lot. The government had bowed down in front of the terrorist organisation Jammu and Kashmir Liberation Front (JKLF), releasing five of their men in exchange of the kidnapped daughter of the then Union Home Minister Mufti Mohammed Sayeed. The release bolstered militancy and encouraged tens of thousands of Kashmiris to come out openly in support of the armed insurgency.

On January 25, Ravi prepared to leave for work at 7.10 am. Nirmal recalls that it was snowing heavily. “He wore his cap and he had his briefcase in his hand. It was very cold, he asked me not to come out,” she says.

Minutes after he left, Nirmal heard a sound. “All night people in the neighbourhood were in mosques shouting religious slogans and beating thalis (plates). I thought to myself: why are they bursting firecrackers now!” she says.

She ventured out a bit and saw a bus outside. Many uniformed Airforce personnel stood around it. She came out. The first thing Nirmal saw was her husband’s briefcase with a bullet lodged in it. “I was still thinking that maybe he has left already in a jeep,” she says.

And then she saw him. “His left leg was folded. One of his eyes was open. He looked at me and it got closed,” she says.

In that shock and grief, Nirmal says the first thought that came to her mind was: why is my husband lying on ground with one bullet! How will soldiers like him defend India if they go down with one bullet!

It was only later that she learnt Ravi was hit by 27 bullets. He was taken to the hospital, but he could not be saved.

The killers, allegedly led by JKLF terrorist Yasin Malik, had driven to the spot on a Honda motorcycle and a Maruti Gypsy. They fired from 2-3 automatic weapons and one semi-automatic pistol. Then they vanished towards the bypass. Four Airforce personnel, including Ravi Khanna died in the attack, while 10 were injured. In a report submitted by the then J&K Governor Jagmohan’s adviser, Jamil Qureshi, a Jammu and Kashmir Armed Police post close to the spot had eight personnel, carrying eight .303 rifles and 400 rounds of ammunition. But they chose not to react.

In his memoir, Jagmohan mentions his meeting with Nirmal. She, he writes, “struck me as unusually courageous and gentle. Her tragedy was immense, and it was writ large on her pale face. But she did not utter a single word against either Muslims or Kashmiris.”

Ravi’ both parents, who lived in Amritsar, died within 10 months of their son’s death. “They just could not bear the loss. My mother also became insane with grief,” says Nirmal.

After Ravi’s death, the young widow, with her two small children, had to face a lot of difficulties. She was without a pension for 4.5 years before she won her due in the court. “Let bygones be bygones. But I must tell you that I fought like Phoolan Devi,” she says.

As the trial in the case began a day after the Khannas would have celebrated their 41st marriage anniversary, Nirmal is hopeful that she will finally get justice after more than three decades. The TADA court in Jammu has ordered that Yasin Malik be personally produced for trial on October 1.

Nirmal, meanwhile, wonders if her husband’s name appears on the National War Memorial in Delhi, inaugurated earlier this year. “I will not die before I get justice. That much I can tell you for sure,” she says.