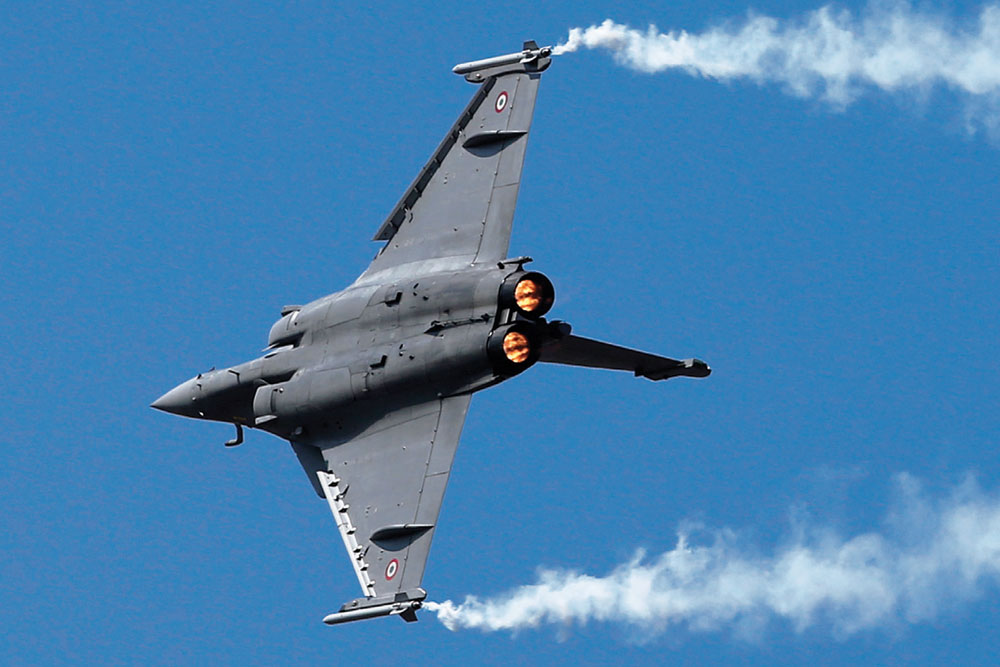 
IF THE DUST is now allowed to settle on the Rafale case, India and its Air Force can move on. On November 14th, the Supreme Court dismissed the review petition filed on February 21st on its December 18th, 2018 verdict, effectively ending a battle between partisan perception and a process the court has not seen reason to investigate further. Behind the court’s words—‘it does appear that the endeavour of the petitioners is to construe themselves as an appellate authority to determine each aspect of the contract and call upon the Court to do the same. We do not believe this to be the jurisdiction to be exercised’—stand two essential facts: First, while any decision-making process may involve multiple and even contradictory opinions, since debate is essential to such a process, all of the same need not find expression in the final decision taken. And second, apples and oranges cannot be compared.

Given the debate l’affaire Rafale had generated in the run-up to the General Election earlier this year ever since a press conference by Congress’ Randeep Singh Surjewala in November 2017, a couple of fundamentals had best be put out of the way. First, there was no Rafale ‘deal’ under the UPA Government as the Request for Proposal (RFP) of 2007 did not lead to a contract being signed. Although the lowest vendor was chosen in 2012 once Dassault’s Rafale had won the competitive bid, negotiations came to an end and the process was nowhere near completion when the UPA left office in May 2014. Therefore, there is no original deal to compare the 2016 agreement (signed directly with the French government) with. Second, the 2016 deal is qualitatively different from the earlier proposal which did not include the cost of weapons, tools and equipment, logistics and training, etcetera. In contrast, the 2016 deal includes India-specific modifications, additional weapons packages, infra and logistics support as well as cost of platform. India, under the original proposal would have bought a base model, a skeleton, while, now, it’s getting a customised ‘full package’ with multiple add-ons. Thus, comparing the two—the deal and the non-deal—is largely a waste of time.

The court has found no reason to doubt that due process was followed by the Government nor the quality and need of the aircraft. The proposal to procure 126 aircraft had first surfaced in 2000 after an assessment of the Indian Air Force’s (IAF) critical need for fighters. Under the 2007 RFP, India wanted to acquire 126 fighters, 18 in fly-away condition while Hindustan Aeronautics would make the rest in India under transfer of technology (ToT). When India scaled the number down to 36, still in fly-away condition, it didn’t include ToT in the conventional sense but switched to the strategic partnership model—a more holistic approach than ToT as it puts the emphasis on defence manufacturing in India and acquires greater significance because of the inter-governmental nature of the deal that underscores the partnership between India and France. Thus, when the offsets were renegotiated, Dassault was put under obligation to invest back half the deal’s worth in India, generating about €3billion in business for Indian firms over the next few years and hundreds of jobs. Also, 75 per cent of the fleet would be kept operational by Dassault at any time under a five-year warranty, as well as taking care of the initial training of IAF personnel.

The Rafale Medium Multi-Role Combat Aircraft (MMRCA) has proved its combat capability consistently for more than a decade now, whether in Afghanistan, Libya or Mali. Compared to India’s staple of Sukhoi, the Rafale has a range almost twice that of the Su 30MKI (up to 1,055 km versus a maximum 550 km) and can undertake as many as five sorties every 24 hours against the Su 30MKI’s three. The induction of the Rafale and its consolidation in the IAF should nullify the Pakistan Air Force’s (PAF) F16 advantage, which currently allows the PAF to enjoy a 1:2 edge over the IAF in terms of the number of Sukhois scrambled per F16, given the latter’s missile and radar superiority. In fact, the Rafale is likely to reverse that deployment ratio in the IAF’s favour. That’s why, in the aftermath of the February Balakot strikes, the Prime Minister had said that India would have had even better results if it already had the Rafale.

But what makes Rafale the potential gamechanger for the IAF are the enhancements to the aircraft which the 2016 deal has secured. France-based European missile manufacturer MBDA has added the Meteor and SCALP missiles to the Rafale for India. The Meteor, an ATA (air-to-air) missile, has a BVR (beyond-visual-range) over 100 km while SCALP (also called Storm Shadow) is an ALCM (air-launched cruise missile) with a range above 560 km. Given the penetrative depth and fire power of these two cutting-edge weapons, the IAF wouldn’t need to cross Indian borders to hit targets deep inside hostile territory. As a BVR ATA, Meteor currently doesn’t seem to have a rival in the market. For its part, SCALP would have ended the Balakot operation faster and with far fewer risks to the IAF. To get a fuller picture, we need to remember that these weapons will be complemented by the S400 missile defence system due next year.

Among the India-specific additions is also the Israeli helmet-mounted display that will allow IAF pilots to fire weapons faster and at greater convenience. The India-destined Rafale also has a decoy system to thwart incoming projectiles, as well as infra-red search and tracking. The aircraft has also been made capable of high-altitude take-offs, a necessity for the IAF in Ladakh.


The induction of the Rafale should nullify Pakistan’s current F16 advantage. The Rafale is likely to reverse the deployment ratio in India’s favour. That’s why, after Balakot, the Prime Minister had said India would have had even better results if it already had the Rafale

Thus, the Rafale India signed up for in 2016 is a very different aircraft from what the IAF would have got if the earlier non-deal had gone ahead. That’s why, comparing the two is akin to comparing two distinct entities. Although the Government had not disclosed specifics of the sum of money involved, certain calculations could always be made with figures available in the public domain. While the total value of the 2016 deal is estimated at €7.8billion, as per the December 2012 conversion rate, the old proposal’s value should have been €7.75 billion. But the actual price in the 2012 tender had been about $25 billion, or €19 billion, almost two-and-a-half times higher than what was claimed for the original proposal in the November 2017 allegations. Moreover, it was found that the cost of manufacturing 108 fighters in India by collaboration would be raised by about €19.5 billion (or Rs 150 crore, as per 2012 conversion rates) since labour man-hours in India were 2.7 times higher than in France. This was the point when then Defence Minister AK Antony had reportedly put the brakes on the process.

Another important but little-discussed matter is that, as per the old proposal, India had agreed to a fixed-cost formula enabling the vendor to add 3.9 per cent additional inflation costs. The 2016 deal was calculated on actual cost (as on the day) and European inflation indices, with the latter being capped at an annual 3.5 per cent. So, while India would have kept paying additionally for inflation indices as per the old proposal, by the new deal, India would pay less if European inflation fell and never more than 3.5 per cent no matter how high it rose.

The 36 Rafale India gets is quantitatively less than 126 but qualitatively enhanced far beyond the original plan. The aircraft also come with 50 years of technical support. Once deployed at full squadron strength (one each at Ambala in Haryana and Hasimara in West Bengal), the IAF’s long wait for a state-of-the-art fighter will end. Unfortunately, the IAF will still have a big gap to fill between its required squadron strength of 42, a magic figure that has proved more of a chimera, and its current 32 to which the Rafale will add no more than two squadrons. If the court has brought closure to the controversy over Rafale, this new beginning for the fighter and the force is not a moment to rejoice (or sulk) but make haste elsewhere.