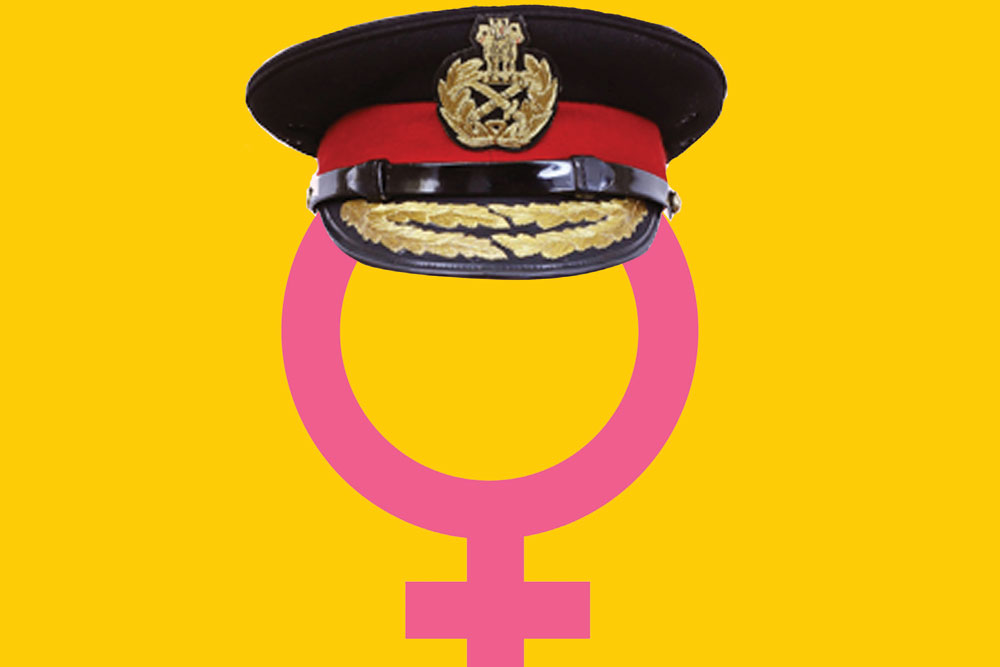 
TEN YEARS AGO, when Seema Singh, then an Army Major who was out of service as women were not granted ‘permanent commission’, knocked on BJP leader and lawyer Meenakshi Lekhi’s door with little hope and no money, all she wanted was to get her job back. Today, flanked by two other women officers in uniform, she figures in one of Amul’s iconic advertisements with this tagline: marching ahead.

The Supreme Court ruling on February 17th not only gave all women officers in the Army the right to serve as commanding officers and be granted ‘permanent commission’, a step towards giving them the right to serve the Army on a par with men, but also discarded arguments delineating gender stereotypes. A glass ceiling has been broken, unmistakably. It resonates in the wording of the ruling. ‘The submissions advanced in the note tendered to this Court are based on sex stereotypes premised on assumptions about socially ascribed roles of gender which discriminate against women,’ said a two-judge bench of Justices DY Chandrachud and Ajay Rastogi, while rejecting the Ministry of Defence’s (MoD) argument that troops are not yet mentally schooled to accept women officers in command of units because they are predominantly drawn from a rural background.

Permanent Commission, a service of 20 years for all women officers, would grant them promotions, ranks and pension like their male colleagues. Promotions under it are linked to performance, fitness, ability and age. Women can now command units like logistics, engineering, ordnance, intelligence and signals. So far, they have been inducted through a Short Service Commission (SSC) allowing them to work for up to 14 years while their male counterparts could opt for permanent commission at the end of 10 years of service. The ruling, however, does not touch on the contentious issue of granting women rights to serve in combat units as it was not contested in the appeal before the court.

“This judgment will go a long way in deeper understanding of the concept of empowered women. Women seek parity with dignity, not charity and favour,” says Lekhi, the lawyer for the petitioners. Eleven women petitioners, all in their forties now, had moved the Delhi High Court in 2010 seeking directions to the Centre to stop discrimination against them. For Lekhi, it’s a victory over a “parochial mindset” and “inane” arguments.

The MoD had cited prolonged absence during pregnancy, motherhood and domestic obligations towards their children and families as “hazards of service”. This argument too was dismissed by the judgment which called it a ‘strong stereotype, which assumes that domestic obligations rest solely on women….. Physiological features of women have no link to their rights. The mindset must change.’

For the women in the Army, this is just the beginning of the battle for equality. As Maroof Raza, a retired Army officer and strategic affairs expert, puts it: “Army is like a monkhood. If you are prepared to make that choice, go ahead.” He dismisses apprehensions about the reluctance of jawans to take orders from a woman. After all, India has had a woman Defence Minister in Nirmala Sitaraman.

Prime Minister Narendra Modi, in a “gift” to “brave daughters”, had announced from the ramparts of the Red Fort on August 15th, 2018, that women officers recruited under SSC will have the option of taking up permanent commission. However, the Government issued guidelines last February to make grant of permanent commission for women officers applicable prospectively. The Supreme Court has directed the forces to grant it to all willing women officers, upholding the 2010 Delhi High Court order.


The Supreme Court ruling will give women officers a chance to carry out independent tasks, prove their professional skills, take decisions and give orders.

At that time, women officers were granted permanent commission only in the Judge Advocate General’s Branch and the Army Education Corps. In February last year, the MoD permitted permanent commission to SSC women officers in eight other sections. It does not touch combat roles, keeping women out of infantry, armoured corps and artillery, an issue that faces stiff resistance from within the forces. A woman can now command battalions and go up in rank, but can she rise to the position of the Chief of Army Staff without commanding combat formations?

Over the years, the Army has cited reasons like logistics, operational culture, infrastructure and physical limitations for keeping women out of combat roles. A day after the Supreme Court ruling, General Officer Commanding-in-Chief of Western Command, Lieutenant General RP Singh , while welcoming the order, said the time has not yet come for combat roles for women. He said women officers were already in wings “related” to combat.

The Army headquarters is examining concerns about the human resources issues that the Supreme Court order may throw up. Given the court’s three-month deadline, it needs to put in place a time-bound plan to implement the order. Besides, military hierarchy is steeply pyramidical, unlike the bureaucracy, where an IAS officer is almost assured of promotion to be a joint secretary equivalent in service till the age of 60. In the military hierarchy, the higher you rise, the number of vacancies reduce by a third beyond the rank of Lieutenant Colonel.

After the judgment on women officers in the Army, from which around 1,500 will benefit, a petition seeking permanent commission for women officers in the Indian Air Force (IAF) is before the court. The IAF had started inducting women as fighter pilots in 2017. “Inside the cockpit of a fighter aircraft, there is a lot of physical stress. It’s not something that cannot be overcome. But the question is of sustaining it,” says Air Marshal (Retired) Sumit Mukerji, who had prepared a report as Air Officer Personnel (AOP) in 2008 when AK Antony was the Defence Minister.

He says there are women fighter pilots in several countries, but the numbers are limited, even in the West. He also flags another familiar concern— in time of war, what if a woman officer is taken Prisoner of War (PoW)? “One would be lucky if the enemy country respects the Geneva Convention on PoWs.”

The judgment stated that an absolute bar on women seeking criteria or command appointments would not comport with the guarantee of equality under Article 14. Unrelenting in its rejection of the Ministry’s arguments, the bench said “to cast aspersions on ability of women and their role and achievements in Army is an insult not only to women but also to Indian Army.”

The recent ruling will give the women officers a chance to carry out independent tasks, prove their professional skills, take decisions and give commands. The question is whether it will be extended to the personnel below officer rank, and to the Navy and Air Force as well. For now, the women have won the first battle. And the men need to rise to the occasion and salute that.