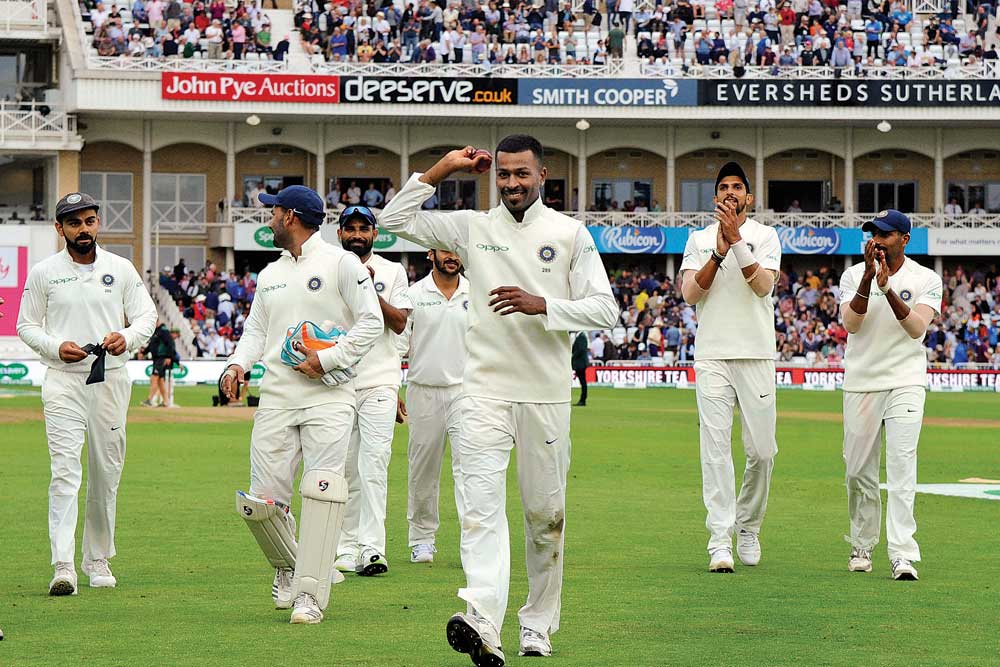 HARDIK PANDYA’S place in the Indian Test team was hanging by a prayer. It’s hard to imagine that today, given he was one of the chief architects of India’s landmark win (by 203 runs) over England in the third Test in Nottingham to resuscitate his team’s hopes in the five-match series. On the fourth evening at Trent Bridge—a day that would’ve witnessed India’s victory but for England’s stodgy last-wicket stand—Pandya was found peacocking about the outfield in all his Caribbean-inspired oomph. His diamond ear studs winked in the sun, his mouth bracketed by a Van Dyke beard often widened into a grin, and there was a characteristic swagger to his ropey limbs. But just three evenings earlier, at the start of the Nottingham Test, with India beginning the game 2-0 down after two Tests, Pandya’s disposition mirrored the weather conditions in the Midlands: stoic and cloudy, without a ray of sunshine in sight.

Pandya, all of seven Test matches old when the England series began, had cemented his spot in the playing eleven on the basis of being an all-rounder. A genuine all-rounder at that, who, on his day, could score big runs and/or back up India’s frontline quicks as the third seamer. Such days, however, hadn’t dawned for him in England; neither at Edgbaston nor at Lord’s. In the first Test, a Test that India could’ve won, he had in fact batted below both wicketkeeper Dinesh Karthik and off-spinner R Ashwin, and wasn’t brought on to bowl in the second innings after having gone wicketless in the first — the fourth consecutive Test of his short career where he hadn’t dismissed anyone from the opposition.

A good all-rounder serves many purposes, but his most important function is being the team’s fulcrum; he is key to the balance of the side. With Pandya’s ineffectiveness thus far, India came into the Nottingham Test with their wheels misaligned. “Apparently they are playing Hardik Pandya as an all-rounder to help out with the bowling,” Michael Holding, the former West Indies quick, said in an interview with ESPNCricinfo before this Test. “When he bowls he isn’t as effective as he should be. If he was a good batsman… and then he bowls and gets two or three wickets, happy, hallelujah! But he is not getting the amount of runs that can then allow him to get a wicket or two in the Test match. That doesn’t work.” And comparisons with Kapil Dev, which Pandya was burdened with after his debut series in Sri Lanka last year, made Holding laugh —“Nowhere near there yet. And they need to find someone who can contribute a lot more to this team right now.”

International cricketers are acutely aware of criticism even if they claim not to read what’s written or spoken in the media. Pandya must’ve known his place in the starting lineup was precarious, given that captain Virat Kohli isn’t shy to change combinations on a whim, and that he, somehow, was the only player not named Kohli who Kohli hadn’t dropped yet during his reign. And surely, Pandya must’ve seen the look on Kohli’s face when he was dismissed on the final ball of the first day in Trent Bridge.

In the space of 29 balls, Pandya took five wickets in the first innings

As the all-rounder had taken strike to James Anderson, with the responsibility to fend off just one more ball on Day One, a swarm of Indian supporters in the stands, known collectively as the Bharat Army, sought divine intervention. “Ganpati Bappa!” one set cried, its echo followed closely by the other set’s “Morya!” The chant was still wet in his ears when he bowed his head and walked off, dismissed for 18. Even the gods, it seemed, had turned their backs on Pandya and India.

The second day didn’t begin too well either. In Pandya’s absence, glaring by now, India’s final four wickets were lost for just six runs. And by the time the first session of Day Two came to a close for the lunch break, England’s openers had trotted ahead at a shade under five runs an over — eight overs bowled, 46 runs scored, no wickets taken. India’s new-ball bowlers Mohammed Shami and Jasprit Bumrah, the latter returning from injury and making his maiden appearance in this series, were way too short with their length and had nearly wasted away the lacquer on the ball when the game, fortunately, paused for the midday meal. For, on the other side of it, Pandya was going to change the course of England’s batting innings. And India’s fortunes in this series.

THE BALL, still more new than old, was tossed in Pandya’s direction in the 25th over of England’s innings. On strike was Joe Root, England’s captain and best batsman. His first delivery was short-of-a-length, but not nearly as short as what his more skilled colleagues had been bowling. The ball held its line en route to Root’s bat, kissed the outside edge and was pouched at second slip. One ball, one wicket. In his following over, Pandya made the decision to go even fuller and give the ball enough air to swing. The conditions were ripe — dank clouds hovered — and swing it did, his natural movement shaping the ball away from the right-handed batsman.

Twice Pandya pitched it up to Jonny Bairstow and twice he went for boundaries, the second of which, emblematically, off a nick. But on the third occasion, the first ball of his fourth over, Bairstow feebly edged the full ball into second slip’s waiting hands. The new batsman was Chris Woakes, fresh off a hundred from the Lord’s Test. Pandya’s full and swinging balls didn’t trouble him — crunching the next two deliveries off the middle of his bat for boundaries. “You will get driven. Nobody is perfect,” an impressed Holding, Pandya’s vocal critic, said on-air. “But you keep it full and you’ll get wickets.” You know Pandya wasn’t listening, for he dug the next ball in short and had an uneasy Woakes glove a catch to the wicketkeeper.

With the second new ball on day 4, Bumrah ripped through England’s defences

For the third time in five overs, Pandya took a wicket off the very first ball of a new over, this time in Adil Rashid. With Rashid’s wicket (caught behind of a full one) he found himself with four wickets in an innings for the first time, and also on a hat-trick. The hat-trick was missed, but his maiden five-for wasn’t, just three balls later. Once Stuart Broad was trapped LBW, Pandya had done far more than hold aloft a red ball for the first time in his career; he had snapped England’s spine and with it, their hopes of recovering in this Test. In the space of 29 balls, Pandya had dismissed half the side, the other half too succumbing within the space of one Test session.

The man-of-the-match award eluded Pandya; it went to his captain, Virat Kohli. The scoreboard indeed confirms that the win was a Kohli-led joint effort. The Indian captain batted with mettle seldom shown by Indian batsmen in overseas conditions, scoring exactly 200 runs in the match, just as he did at Edgbaston. In the first innings, where he narrowly missed out on a hundred by three runs, Kohli received the support of Ajinkya Rahane, who scored 81 magnificent runs. And in the second innings, Kohli’s century was stitched in partnership with Cheteshwar Pujara’s 72.

The new ball, too, was India’s ally. In the last innings of the match, England’s batsmen fell in clumps to the fury caused by shiny leather — Ishant Sharma opened up the top-order with the first ball and four wickets dropped in the space of 19 minutes to the second new ball. The bowler who wreaked havoc in that particular spell was Jasprit Bumrah, who, like Pandya in the first innings, finished with a five-for in the second. And the contributions by the silent heroes in India’s catching cordon cannot be forgotten. Wicketkeeper Rishabh Pant, on debut no less, took seven catches behind the stumps while KL Rahul snaffled as many in the slips, which for long had been India’s Achilles heel on the field.

Yet, while all these performances safeguarded India from losing the match, it was Pandya who ensured that the team went on to win the Test. Again, a closer look at the scoreboard reveals just why. Three out of the four innings in Nottingham, including the last one on an abrasive pitch, breached the 300-run mark. The only one that didn’t, England’s first, folded for under 200, each of their 10 wickets knocked over for just 107 runs in the space of a session. And that was only due to Pandya, a fact conceded by captain Root in the post-match presentation ceremony. “We were woeful in that session,” Root said. “It probably cost us the match.”

Then, in the presser after his match-altering spell, Pandya sat down behind a bouquet of mics, old smile and new swagger in tow. Both quickly drained from his face on hearing a mention of ‘Kapil’. “I have never wanted to be Kapil Dev. Let me be Hardik Pandya,” he said, nearly pleading. “I am good at being Hardik Pandya; have reached here being Hardik Pandya, not Kapil Dev. Stop comparing me with anyone. I will be happy if you don’t.”