Why the Super Kings Reign

The IPL success of Chennai Super Kings can be traced to a certain business acumen. That of India Cements’ N Srinivasan. He is that rare team owner who knows exactly what he’s up to. 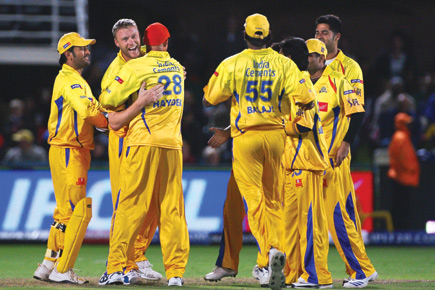 The IPL success of Chennai Super Kings can be traced to the business acumen of India Cements’ N Srinivasan.


When the first eight teams for the Indian Premier League (IPL) were auctioned in February 2008, at what then seemed like illogically inflated prices, the question was whether these brave buyers would ever recover their monies. Some seemed like individuals who had let their sports enthusiasm get the better of them. Others looked like otherwise sensible companies possessed by some spirit making them waste shareholders’ funds on a whim called cricket. That too, Twenty:20 cricket, the jack-in-the-box version.

Why invest in a completely unrelated business? What on earth could cement makers and petroleum refiners gain from league-level cricket?

Now into the IPL’s third season, all the razzmatazz and claims of T20 league cricket being the hottest business idea of recent times notwithstanding, such questions still haunt several IPL franchises. But that’s something that doesn’t bother Narayanaswami Srinivasan, 64, managing director of India Cements, which owns Chennai Super Kings (CSK). No one has made more from the game than Srinivasan, and he wants to use CSK as a catalyst in transforming his company from a clannish, po-faced, South Indian cement maker into a pan-India conglomerate.

The company’s new 10-storey seaside office on Chennai’s leafy Santhome Road provides ample evidence of its new-found ambition. A little more than a year ago, if you stepped into India Cements’ headquarters, then housed in a building on Mount Road with three floors in varied stages of dilapidation, you could be forgiven for assuming that modernity had completely passed this company by. It was as dowdy as dowdy gets. Everywhere you turned, ageing wood-panelled walls would be adorned with yellowing Ravi Varma litho prints of almost every god, goddess and godman in the Hindu pantheon. Computers, ACs, doors, vaults, elevators, bookshelves and most foreheads were smeared with sandalwood paste, vermillion or holy ash.

Now, by comparison, the company’s swank glass-and-chrome office seems almost space age. Employees use automated access cards to get in. The building itself, sporting a giant Chennai Super Kings sign, seems more like the corporate office of the cricket team than that of a Rs 3,500 crore cement maker.

Of all the eight IPL franchise owners, India Cements was perhaps the least known across the country. At the best of times, cement bags are not the most glamorous of products to sell, and it doesn’t help matters if you are seen as a conservative, publicity-shy and provincial operator. To most followers of the game, thus, it came as a surprise that India Cements not only bid more than $90 million for the Chennai team, but also made the most expensive player purchase. It shelled out $1.5 million for MS Dhoni, captain of the Indian cricket team and a man bestowed with popularity to rival Sachin Tendulkar’s.

India Cements kept up the spending in Season Two by snapping up Andrew Flintoff, again for a record $1.6 million odd. But it’s not just the kind of players Srinivasan signs that make his IPL team perhaps the most admired. If religion is an inseparable part of India Cements, so is cricket. The company has been associated with cricket for nearly half a century and it owns as many as 13 teams that play in the highly competitive professional city cricket league in Chennai. Several India stars including Rahul Dravid are employees of India Cements and regularly turn out for valuable pre-season practice. “Our experience of running cricket teams helped us understand how to manage stars,” says Srinivasan, “Several of our local city teams are often a mix of iconic India stars and little-known youngsters who aspire to come up through club cricket. Not many IPL teams know how to do that. Knowing how to handle stars was a big reason for our success.”

No skimpily clad cheerleaders, campy Kollywood endorsers or Coke lettering for the team in yellow. CSK have established themselves on pure play—as one of the most consistent performers, making it to the IPL final match of the inaugural event and the semi-finals last year in South Africa. In an arena filled with showbiz team owners, adept at using the media to their advantage, and billionaire businessmen, accustomed to splurging money now and then on some mega event, Srinivasan has prospered by making use of a genuine understanding of the game. After all, he has been associated with the game as an insider within the country’s cricket bureaucracy.

Since the start of IPL, at least six of the eight teams have either sold some stake to new investors or tried hard to. Not surprisingly, most are fixated on keeping their ‘brand valuation’ high through sundry window dressing measures (think of Rajasthan Royals’ convoluted tie ups and player ‘pooling’ arrangements with teams from England, Australia and the West Indies, which some say stand on flimsy legal ground).

Does the lack of any glam factor off-field make CSK a boring, no-frills team that would find it hard to retain fan loyalty if performances happen to slip?

“Rather than a no-frills team, we are a team that is very serious about cricket,” counters Rakesh Singh, India Cements’ and CSK’s marketing head, “Our objective in getting onto the IPL bandwagon was to give an amazing opportunity for youngsters with potential to rub shoulders with contemporary greats and evolve into ‘great’ talent with that exposure. That is working for us, and dare I say for the country as well. Look at Badrinath, Raina, M Vijay and Sudeep Tyagi. These are all CSK stars proudly representing the country at the highest levels today. And if you have a team filled with exciting youngsters, where is the time or need for other tamasha?”

That approach has plenty of admirers. Says the CEO of a sports marketing firm, “Like many of our most successful cricketers, Srinivasan also believes that if you run a great cricket team, the commerce will follow, unlike some other owners who seem to put visibility and hype over performance. He isn’t using his team to attract private equity, nor does he treat this investment as a business stepping stone for his family members, unlike some of his better-known IPL rivals. He is pretty hands on. CSK is far and away the best-run IPL team. If you were to draw an EPL comparison, I’d say CSK is the Arsenal of IPL.”

Adds Rakesh Singh, “Much before the advent of all new forms of cricket, we have been assiduously involved in the task of recognising talent, grooming players and then giving them opportunities to play high-level cricket.”

Interestingly, a report earlier this year by Brand Finance, a global sports brand and marketing consultancy, declared CSK the most valuable IPL franchise with a brand value of over Rs 224 crore, a 35 per cent growth since 2009, a year when they didn’t even make it to the finals or the Champions League. For the lone team that is perhaps not obsessed with the valuation game, that’s impressive indeed. No wonder this year CSK have 13 sponsors—more than even Shah Rukh Khan’s Knight Riders, the team that’s always led this race.

“For us,” continues Rakesh Singh, “it is never a campaign at the beginning of a tournament. We have been running ads and fan loyalty campaigns from the first round of the IPL, and those still continue. We had a phenomenal response to our Junior Chennai Super Kings talent contest, and the winners are being taken under our junior training programme. So for us, it’s been a long process of being in touch with our fans.”

But beyond cricket, what’s interesting is how Srinivasan has leveraged CSK to boost his cement offtake. It is a capital-intensive business that calls for long-range planning. It is also a cyclical business, sensitive to—apart from regulatory changes—the ups and downs of construction activity. About a year ago, when this correspondent asked Srinivasan why his cash-strapped company should fritter away money on cricket, he dismissed the naïve query with a characteristic closed-eyed scowl and explained: “Even if the company spent Rs 1,500 crore on advertising and brand building, it wouldn’t have got a fraction of the publicity that Chennai Super Kings got us. The team’s brand equity will help us expand India Cements’ businesses in north India. We have big plans to be a pan-India corporate group.”

Observers marvel at his foresight. “Right from the time of his bid for the Chennai franchise,” says an IMG executive present at the franchise auction, “Srinivasan had the P&L (profit and loss numbers) worked out in his head. I don’t think any of the franchise owners knew the business of cricket better than him.”

With its first North Indian greenfield plant in Rajasthan ready to churn out powder later this year, India Cements expects a sizeable share of cement sales in Madhya Pradesh, Gujarat and Maharashtra. With the cost of running CSK fixed and pretty much under control for the next few years (player expense of $5 million and franchise acquisition fee of $9 million remain constant), Srinivasan isn’t worried whether CSK makes money by itself so long as the publicity pushes more and more bags of cement.

“CSK is a wonderful marketing platform for us,” beams Rakesh Singh, “Overnight, we are a household name across the country. When our sales people approach distributors, dealers and consumers in Rajasthan, for instance, we don’t have to introduce ourselves as South India’s biggest cement company, etcetera. When we say we are CSK owners or the Dhoni wala team, there’s instant recognition. It’s the best calling card.” The bags in the north even sell in the CSK yellow team colours, complete with the team logo and star player pictures emblazoned across.

On Orissa’s highways, another target state, there’s no dearth of giant yellow hoardings with Matt Hayden, Suresh Raina and MS Dhoni endorsing the company’s flagship cement brand, Coromandel Super King. “When I speak to my western and northern marketing and sales teams for product-related hoardings, the standard response I get now is that ‘We want the yellow Super King hoardings’”, says the marketing head.

Rival IPL team owners, in contrast, took their time figuring out such things as the intricacies of how the Board of Control for Cricket (BCCI) and state-level associations operate. Vijay Mallya, chief of UB Group and owner of the Bangalore Royal Challengers, found himself stonewalled by officials of the Karnataka Cricket Association. The result was poor practice facilities for the team. Mallya eventually had to rope in Brijesh Patel, an association veteran, as the team CEO.

CSK had no such problems. Srinivasan has been a key member of Sharad Pawar’s cricket cabinet. He was the BCCI’s treasurer when the IPL team auction happened (raising conflict-of-interest questions), and is the president of the Tamil Nadu Cricket Association (TNCA). His company is also the state team’s primary financial sponsor. And that means the association’s entire administrative machinery, including ground staff at the city’s Chepauk Stadium, is at CSK’s disposal. “Liaising with state associations and other civic authorities to stage IPL matches is an art in itself. I don’t know if other franchises have understood it yet,” says KS Vishwanathan, who has twin roles as TNCA secretary and CSK’s chief organiser.

Srinivasan’s Kings are far from invincible, but his business model seems failure-proof.