When Resistance to a Book Is Futile

If reach out is what one must do, then one needs to be on Facebook. And if its adoption involves the betrayal of a tribe of fellow FB naysayers only rumoured to exist, so be it 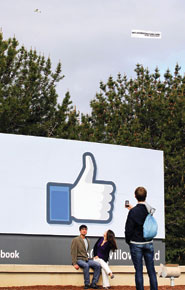 Is it time to embrace Facebook? I speak for myself here, of course, as a lonely member of a woefully scattered tribe of FB naysayers whose study I hear has been turned over by anthropologists to psychiatrists. Once upon a time, staying off the world’s largest social network as a matter of principle would invite a reproach no worse than a shrug of shoulders and upward roll of eyes. Now it gets a finger in rotation above an ear and indiscreet references to a padded cell. One can’t even claim self exclusion as a natural outcome of being a net recluse anymore, not since an FB account became proof not only of bona fide netizenship but of one’s presence on the planet. On Facebook, it seems, existence always precedes purpose—and it doesn’t give anybody any angst.

My opposition to Facebook has had nothing to do with its founder Mark Zuckerberg, who ought to be judged—if at all—on his current leadership, be it his pledge of philanthropy or thumbs-up for an open America, even if it’s hard to erase the impression left by his portrayal in The Social Network as a greedy brat out to betray his buddies. The platform is greater than the sum of its creators, and that ought to guide one’s opinion, or, at the very least, the decision to ignore or join the 1.5 billion odd netizens—as a country, it would be the world’s most populous—who swear by the wonders of this blue page on an electronic screen.

My resistance goes back to my outrage over Facebook’s origin. It all began in a Harvard dorm as a kind of online photo gallery for guys to rate their female college mates by the sole criterion of how ‘hot’ they found them. No matter what spin anyone tries to put on it, and other innovations have sprung from sophomorish pranks in the past too, there is no getting away from the crudity of the project’s original objective (or ‘object’ in this case). And the primacy it appears to accord the user’s ‘face’ only reinforces the point.

That was back in 2004, when it was still a campus phenomenon. As it turned out, what users could share on the platform was a lot more than cheesy remarks. It was an awesome way to keep in touch with friends. Thrown open first to other Ivy League students in America and then to the rest of the world in 2006, it was hailed as exactly the thing that the internet was made for. Incorporated as a company, as any success in America is, its stock was listed on Nasdaq in 2012, and a dollar invested in it back then would be worth almost $2.6 in market value now—which is not spectacular by tech standards but impressive all the same given how outrageously famous it was by the time it went public. Anybody who hadn’t heard of it probably hadn’t heard of the internet either. The sceptics who wondered how a free service could make money had overlooked the value of access to an audience. And so it has proven. In 2014, Facebook Inc recorded almost $3 billion in GAAP profits on revenues of nearly $12.5 billion. Its current market capitalisation? A gulp inducing $296 billion.

An investment opportunity lost, however, is not in the same league as a social life forgone. And it is here, on a cost-benefit analysis, that an anti-Facebook position begins to look seriously unsustainable.

So, is it time to give in? Does setting up an FB page require a face saver of an argument? Maybe it has a redeeming feature or two lurking in there somewhere, even if closer inspection only confirms an old hunch: that it’s designed to force-fit every individual into a mould set by its creator. The ‘status’ updates, the count of ‘friends’, just about everything about it suggests some sort of pre-configuration, the most cringeworthy of all—and dismally ironic for fans of Pink Floyd—being its all-pervasive ‘wall’.

At the end, it is perhaps plain and simple pragmatism that should win the day. If reach out is what the social animal within must do, then one needs to be on Facebook (yes, there’s WhatsApp, but that’s another story). And if its adoption involves the betrayal of a tribe of fellow FB naysayers that is only rumoured to exist, then so be it. If that fails, there is always safety in numbers: a country of a billion-plus couldn’t have made a lousy decision. Er… or could it?