The US is about to impose new sanctions on Iran, which could mean oil anxiety is back 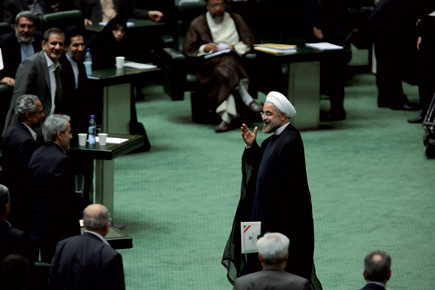 The US is about to impose new sanctions on Iran, which could mean oil anxiety is back


A fortnight ago, Iran’s newly elected President Hassan Rouhani got an unusual greeting from US legislators: a threat of new sanctions that could cripple the Islamic Republic’s economy if it failed to comply with American demands vis-à-vis its nuclear programme. The US House of Representatives passed a bill that seeks to penalise Iran in the event of such a failure by choking its crude oil exports by 1 million barrels per day—though last year’s sanctions have already halved its exports to 1.5 million barrels per day.

Now, Tehran is aware that selling fewer oil barrels in the global market is far better than being at the receiving end of US/Israeli gun barrels (Washington DC has not ruled out armed action against it), but the new sanctions, once approved by the Senate in September, will hurt nonetheless.

Iran’s economy is reeling under last year’s Western sanctions—annual inflation is above 35 per cent and its currency has lost half its value since—and may not be able to survive on the export earnings of just half a million daily barrels. If the threat does not dampen the resolve of Ayatollah Ali Khamenei, Iran’s supreme leader (above Rouhani), to press on with uranium enrichment then the country is likely to pass the nuclear point of no return in mid-2014, according to a recent report by Roubini Global Economics, a New York-based thinktank.

The US pressure-and-negotiate strategy has been formulated to keep Iran from crossing that rubicon. Negotiations thus far have yielded little. Yet, “The election of a moderate-appearing president in Iran have re-ignited hopes of diplomacy,” says Robert McNally, president of the US-based Rapidan Group, “even if the odds are not high of succeeding”.

America’s latest push to keep Iran from going nuclear would no doubt upset the global oil market. To limit its impact, the US plan envisages offsetting the loss of Iranian oil with supplies drawn from oil reserves held by the International Energy Agency (it has 1.5 billion barrels in store). “A 1 million barrels per day release from such reserves could easily replace the lost oil from Iran for over four years,” says McNally, who was once George W Bush’s energy advisor.

Yet, he admits that crude prices could rise “by perhaps $10 per barrel and possibly more due to tight spare capacity and the fear premium”. For a big oil importer that runs an unsustainably big trade deficit like India, that would be a bad outcome. But not as disastrous as the oil market volatility that might ensue ‘if the endgame in Iran includes some kind of military strike’, as the Roubini Global Economics report puts it.