The New Genie in the Bottle

It’s bonanza time for booze buyers in Andhra Pradesh, as liquor marketers ply them with all sorts of freebies to raise consumption. 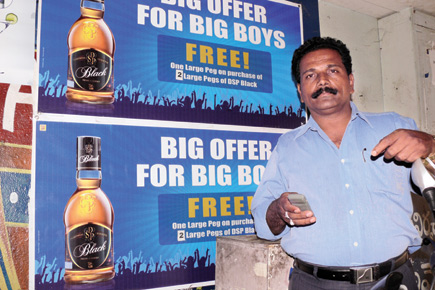 In Andhra Pradesh, buy booze and get a lungi free.


Andhra Pradesh faces a runaway liquor problem. And the state government is not looking away. It seems to be watching the tipple flow, with glee. Why complain if fast-rising excise revenues are stuffing the coffers? If anyone asks, remember, it’s all for the good—extra social sector allocations need extra money.

It’s an attitude that has emboldened liquor marketers to such an extent that no sales gimmick is off-bounds anymore in boosting booze sales. In fact, they seem to be revelling in what can only be considered ‘party time’ in a state that once boasted of liquor prohibition as a policy. To lure drinkers, companies are dangling all kinds of free gifts—from drab ashtrays and bottle-openers to utilitarian pen drives and casseroles, and from loud T-shirts and saris to exciting nighties and lungis. It’s bonanza time indeed.

Those buying a couple of 750 ml bottles of beer are getting a T-shirt or pen drive gratis. For an entire crate of the brew, people are taking home film CDs, if not glasses and casserole sets. And this promotional blitz is not restricted to the well-paid staff of Vishakhapatnam and Cyberabad’s infotech industry (or related services), who might possibly need something to smoothen an existence jarred by multiple time zones. The liquor marketers have ventured deep into the state’s rural areas, apart from urban slums, where saris, lungis and nighties are enticement enough to buy booze by the crate. If these companies have sales targets that stretch way over the horizon, it’s because they have spent minor fortunes on liquor licences. For example, a liquor shop owner in Nadikudi, Guntur district, paid an astounding Rs 5.2 crore for a two-year licence last month. “Unless people drink more, how can licencees recover their money?” asks D Venkateshwar Rao of the AP State Wine Dealers Association.

Liquor licence collections in the state have scaled an all-time high of Rs 7,000 crore this year, up 50 per cent on last year’s figure. Andhra Pradesh’s Congress Chief Minister K Rosaiah has publicly welcomed the rich pickings from liquor shop and bar licences as large contributors to the state’s 2010-11 revenue target of Rs 25,000 crore, which would help him sustain the late CM YSR Reddy’s largesse for the poor.

The statement has brought him instant rebuke from the Telugu Desam Party’s (TDP’s) former Chief Minister Chandrababu Naidu, who terms it a case of robbing Paul to pay Peter. “The government is funding populist welfare schemes by promoting consumption of liquor among the poor,” he says, “Rural dwellers are spending more on health and getting into a debt trap because of their drinking habits. Instead, the government should check corruption in welfare schemes and plug loopholes.”

That sales are on an upswing is not in doubt. In fact, Rao says that it is the increased offtake that justifies the expense on freebies. Also, gifts have always existed as trade incentives for the distribution chain. It’s just that customers now get some of the bounty. And, in any case, curb-side retailers have their own lures in the form of instant edibles like naati chicken legs thrown in with every two quarts of cheap booze.

That logic doesn’t always go down smoothly. A corporate executive sheepishly admits that household items are being used as a way to assure wives a stake in their husbands’ drinking habits. This also explains the widespread advertising for particularly female-friendly gifts. Given that women are the sufferers-in-chief of alcoholism, critics are coming down hard on the practice of giving freebies. The AP government is guilty of blatant liquor promotion, alleges Jayaprakash Narayan, president of Lok Satta party, who resigned from the civil services to contest and win an Assembly seat from Hyderabad. Blaming the skewed excise policy, Narayan says that since the licence fee works out to Rs 50,000 per day (on an average), the dealer has to sell in excess of Rs 3 lakh daily to be financially fine.

Alcoholism, meanwhile, is on the rise. The Congress blames the TDP for increasing vending outlets during its nine years in power. “We cannot reduce them now,” says a Congressman. Strangely, the AP government has also reserved 10 per cent of liquor shop licences for womens’ self help groups (SHGs), a decision taken a decade ago on the reasoning that this would contain the menace of drunkenness. “It has become lucrative for SHGs to run retail vends,” says a state official, “and we cannot prevent them from participating in the auctions.”

None of it impresses Pasgham Sandhya, leader of the Progressive Women’s Organisation. The policy framework, she says, should support healthy living, not subvert it.