The greek tragedy that’s no Eurocalypse

For all the wails and groans in the air, the EU is a political project as much as an economic one. And anyone who favours ‘unity in diversity’ should be pardoned a soft spot for the euro 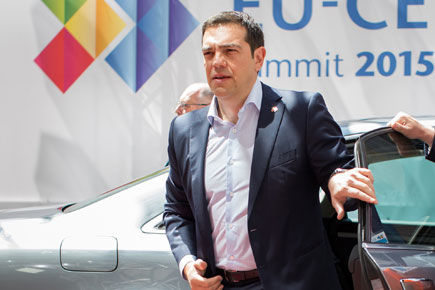 Every Greek tragedy, by literary definition (if there’s any such thing), must tell the tale of a hero laid low by a tragic flaw he or she has no clue of. In Sophocles’ classic drama Oedipus Rex, it’s a doddery old sage called Tiresias who explains the horror that’s befallen the kingdom of Thebes by informing the king of what he has unknowingly done. The modern tragedy that’s getting nails chewed in markets across the world nowadays—as it slowly unfolds, folds, unfolds and folds again (and so on and so forth)—goes by a name that has a ‘rex’ in it alright, but encased in a ‘G’ and ‘it’: Grexit. And there, the echo would end, had it not been for eurosceptics who won’t tire of calling out the European Union for its principal flaw: a common currency for diverse economies with oft-divergent policy needs.

The current crisis is about Greek debt and the country’s slipping ability (or will) to pay its creditors back. As the EU holds yet another summit, news of Athens’ flexibility in meeting some conditions set by its rescuers that would help it avert a default just in time for a 30 June repayment deadline has spelt relief for global markets. As brows are wiped from Tokyo to New York, Greek bonds have rallied, some yields falling a sharp 3 percentage points in an instant (to annual rates of 22 per cent odd), and since bond markets are masters of detail, that’s perhaps as good a sign of a deal in the works as any. The leftist coalition in Athens, led by the Syriza party that won power in a revolt against austerity measures demanded of the country by the IMF, EC and ECB to bail it out of trouble with special loans, appears to have softened enough to do its bit in trying to fix its fisc. Greek taxes are to be raised and some handouts held back, it seems, even if state pensions are to stay shielded (lest the pink coalition cracks up in acrimony).

The money Athens must repay the IMF by month-end, a mere €1.6 billion, is such small change in world affairs that many wonder what the fuss is all about. But it’s clearly a point of principle. Greece owes others about €320 billion overall, about 176 per cent of its GDP, and if Syriza resists all reform aimed at staying within its means, creditors see no way the country can sustain its economy; if push came to shove, it would probably have to leave the Eurozone. For its own sake, some argue, it’s best to let it go. With a currency of its own, it could let its exchange value drop to a level that will squeeze its imports by turning them dearer and boost its exports by making them cheaper in euro terms. Plus, it could lend money in its own currency at a policy rate that works well for its own peculiarities, instead of having to operate under the monetary sway of the European Central Bank. In theory, this could help Greece revive itself.

Some suspect that Greece being part of the EU was a daydream to begin with. And it’s true that the debt crisis can be traced to Greece’s sneaky attempt to ‘converge’ with the Eurozone by meeting the EU’s austere (and Austrian, almost, in ideology) debt and deficit criteria with fake figures. This, doubtless, was the real tragedy of Greece. And it took a while to strike. In 2010, the country was found to have fudged its finances to mask the extent to which its expenses had overshot its revenues. Its economy has lost a fifth of its value since, and its indignance at being pushed around by others (as Athens sees it) has only made the prospect of a Grexit all the more likely.

Or so goes the Tiresian chorus.

Yet, for all the wails and groans in the air, fears of a eurocalypse are vastly exaggerated.

The European Union is a political project as much as an economic one. And anyone who favours ‘unity in diversity’ should be pardoned a soft spot for the euro. If Greece calls it quits, the common currency’s critics would only get louder and louder. If it gets pushed out, confidence in the bond that unifies the 19 countries would collapse. In all, given the gloom that hangs over the continent, the eventual gains of a common market would seem even more like a chimera.

In the final analysis, the ‘ever closer’ part of the ‘union’ is not a lost cause yet, and it need not end in tragedy. Neither is the euro’s grand flaw irredeemable. Unless, of course, the truth of its economy turns into a casualty of compliance again, and there’s no Socrates around to call the bluff.