The Big Battle Over Crude Oil

Has Opec lost control of prices at long last? 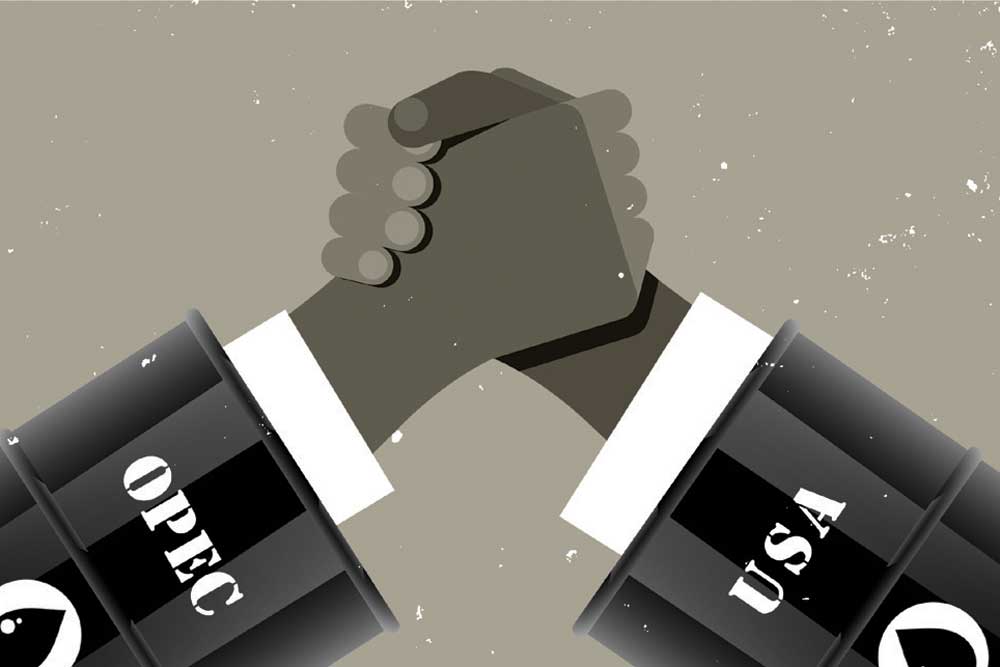 AWAY FROM INDIAN shores, an eyeball-to-eyeball standoff has got market watchers rivetted. It’s a face-off over oil, and how it plays out could count for a lot: from which way Indian rates of interest go, pegged as they are to inflation, to whether market forces finally get to triumph in a field that has held the world economy hostage all too often in the past. Opec, the oil cartel led by Saudi Arabia, is aglare at a market enchanted by an upstart, a sprightly new ‘swing player’ in the form of America’s shale-oil industry, and it’s not clear who will blink first. At the moment, global oil prices are stuck at about $50 per barrel, a ‘gnash equilibrium’ of sorts that reveals no winner. Both have just upped the ante, though. Saudi Arabia has emerged from a strategy huddle with its Opec allies in Kuwait and America has lifted what President Donald Trump calls ‘restrictions on energy’ to boost US output.

For half a century, Saudi Arabia was the ‘central banker’ of the world’s most prized commodity, this title justified by its power to set crude prices by adjusting its own—and Opec’s—supply levels to maximise gains for itself and its partners. But then a sustained period of oil above $100 per barrel was to lure investment in drilling technology, egg exploration on and turn America into an ace fracker: by jet-spraying a mix of water and other chemicals into shale sediments, oil entrapped in cracks could now be extracted at an attractive cost. By 2015, the US was to outstrip Saudi Arabia as the world’s top oil producer.

The Saudi response was to press its cost advantage—its oil is far cheaper to pump out—and swamp the market with enough oil to send prices so low that frackers would choke. Since 2014, once its wells got gushy and prices fell to $40 a barrel, many shale businesses have gasped for survival. Several US rigs have had to shut down. After peaking at 9.5 million barrels per day in early 2015, US output fell by a million last year. Global oil output had averaged 96 million barrels daily in 2016 while demand stayed at 95 million. The great oil glut squeezed Opec revenues badly too, of course. By late last year, the cartel found itself all agroan under the financial strain.

Last November, Opec decided to reverse tack, tighten supply and earn more money, and its power—or lack thereof—as a price setter is now under closer scrutiny than ever before. Saudi self clamps have proven effective, Opec’s daily supply is down by a million barrels, and its target ‘floor price’ of $50 per barrel has held firm despite widespread scepticism. But it’s early days yet.

The scenario is fraught with a wide range of complexities. Not only is Opec unity not fully assured, its plan counts on the cooperation of an external player, Russia, which pumps out 10.5 million barrels a day (and is No 1 now that Saudi Arabia has scaled back). Putin’s Russia wants a higher price too, but would perhaps be equally ready to strike a deal with Trump’s America. The big reason that analysts say it’s time to call Opec’s bluff as a price-setter, though, is the resilience of frackers. Not only have American rigs got back in action after the price revival, they’ve done so with such speed—having worked hard on cost efficiency for two years—that US daily output has already spurted past 9 million barrels, half a million higher than it was just a quarter ago. Also, the US has vast stockpiles to release in case Opec tightens even more. If prices go up by another $10 or so, some of its costlier frackers would dust off their jet-sprays and get back in business. The extra supply would cap prices.

Market forces, in other words, finally seem forceful enough to replace Opec shortfalls and cramp the cartel’s command of prices. And with capitalist competition ready to keep the oil market in balance for the first time in decades, energy volatility may no longer be able to wreak havoc on the world economy.

Yet, some suspect Opec’s ‘liquid oxygen’ game—frackers neither choke nor thrive with oil at $50—might have a twist up ahead. After all, since Saudi Arabia has lined up an Initial Public Offer for its oil major Aramco, it desperately needs to re-assert its market authority and prove its worth to investors. This raises the risk of an oil shock. On current dynamics, only cynics would bet on one. But a Middle East flare-up could blow our calculations to bits. For market forces to neutralise cartel prices, peace would have to play ally.