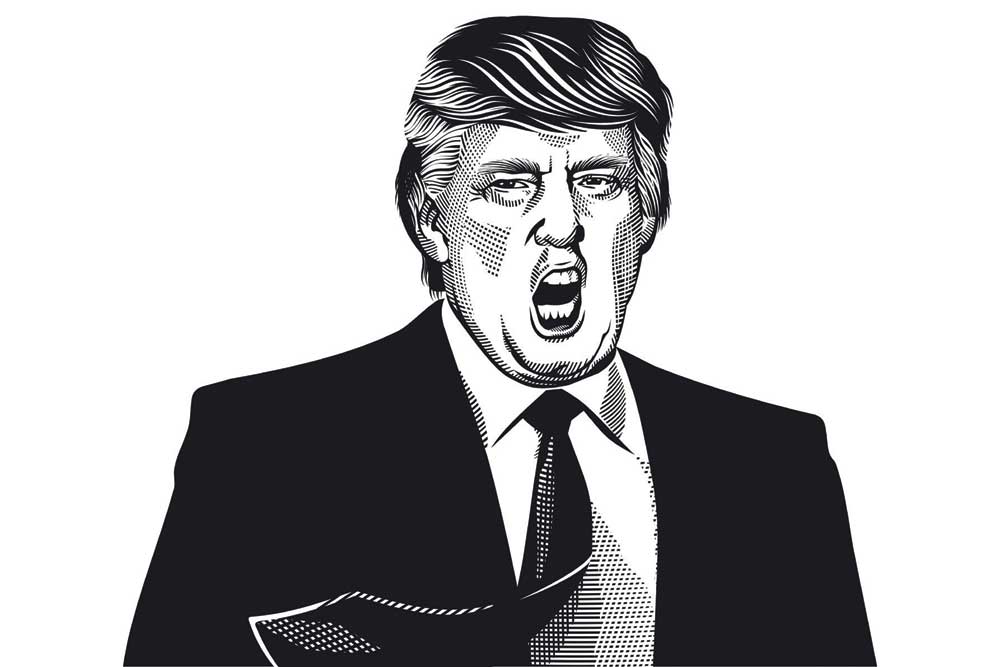 FOR A WHILE, it looked as if India would be left out of the great global squabble over world trade. But then, there’s always US President Donald Trump to count on. In his latest spectacle of spite, he stormed out of a G-7 summit in Quebec City, called Canada a country led by a ‘dishonest liar’, likened America to a ‘piggyback that everybody is robbing’ and then directed some of his ire at Delhi for good measure. “This isn’t just G-7,” he reportedly said, “We have India, where some of the tariffs are 100 per cent—a hundred per cent. And we charge nothing. We can’t do that.”

On a scale of ‘honest lies’ that the post-truth world order has given us, Trump’s rant perhaps lies somewhere between Meatloaf’s I Would Do Anything for Love (But I Won’t Do That) and Harley Davidson’s ‘Define your world in a whole new way’ slogan; which is to say, somewhere between too-fuzzy-to-figure and too-flaky-to-foil.

In general, it’s true that India has upped its import barriers in a tiny reversal of its post-1991 open market policy (the idea of which was to turn local producers globally competitive by exposing them to foreign competition). The Budget for 2018-19 has raised Basic Customs Duty on a wide range of imports, from cars and phones to silk fabrics and fruit juices. The US grumble over India’s jumble of levies is not fake either: after the basic duty, an inward shipment gets slapped with an additional duty, a special duty and an education cess. All added up, though, most imports can still be retailed here at no more than 33 per cent extra over their landed cost, a far cry from the closed economy days when some stuff was forced to sell at four times its original price.

So what tariffs is Trump talking about? One suspect could be the levy India imposes on American walnuts, raised recently from 30 to 100 per cent in token retaliation to the 25 per cent US burden on Indian steel and aluminium. Given Trump’s attention span, however, the figure he likes to echo might have less to do with symbolic brain food like walnuts and more to do with the hyperbolic road swag of big bikes. In February, he had echoed Harley Davidson’s Indian market woes thus: “When they send a motorcycle to India… they have to pay 100 per cent tax—a hundred per cent.” He did, of course, acknowledge that Delhi had eased the way for 800-cc- plus bikes. “Now, the Prime Minister [of India], who I think is a fantastic man, called me the other day and said, ‘We’re lowering it to 50 per cent.’ I said, ‘Okay, but so far we’re getting nothing.’ So we get nothing, he gets 50, and they think [they’re] doing us a favour. That’s not a favour.”

Since import barriers aren’t level, Trump insists, America is getting ripped off. In this formulation, the only way trade can be fair rather than foul—or ‘fool’ in his vocabulary—is if each country offers the other equal market access. As rhetoric, it’s seductive. As a formula, it’s reductive. Or so free-trade theorists would argue. After all, it’s supposed to be in one’s own interest that a country keeps itself open. David Ricardo’s original call to openness is about the mutual gains to be made by trade partners opting to specialise in what each is relatively better at. While this is just another academic model, as easily laid low by real conditions as any other, both history and theory suggest that an economy which operates under the pressure of global rivalry eventually gets ahead regardless of what others do. For longer than anyone can remember, Free Market mavens have held America up as a paragon of this principle.

So what explains Trump’s stance? A loss of confidence? Or, worse, a bad case of myopia? For clues, turn to his trade advisor, Peter Navarro, a business analyst who wrote strategy books before he joined Trump’s team and revealed his own reservation policy for hell. The first that I chanced upon was Navarro’s 2001 If It’s Raining In Brazil, Buy Starbucks, which explains how odd weather patterns affect share prices. Five years later, I reviewed his The Well-Timed Strategy, all about how an enterprise could calibrate itself to business cycles and maximise profits. By the time he published his 2011 Death by China, he had gone half apoplectic on the need to shield US firms from Beijing-backed businesses. Common to all three books is their focus on the money that Wall Street makes.

Is that what US leadership of the ‘free world’ has reduced itself to? All the more reason, one would think, for India to resist going the reactionary way.