If a Horse Can Fly…

Vijay Mallya still believes Kingfisher Airlines can be revived. Is this just another daydream? 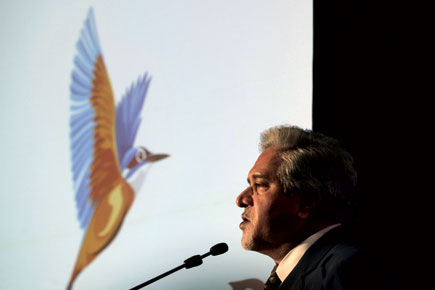 Vijay Mallya still believes Kingfisher Airlines can be revived. Is this just another daydream?


The ongoing Kingfisher saga seldom has a dull moment. At its core is the question of Dr Vijay Mallya’s business acumen—or lack thereof—in his aviation (mis)adventure, his airline’s bottomline writ large in red, serving warnings both to those who imagine a horse can fly (UB Group’s logo) and who think India’s State-led banks do a fair job of lending money.

By policy, India does not allow alcohol advertising. But Kingfisher, originally a beer brand, has been strikingly innovative in using surrogate platforms—who can grudge a harmless calendar?—to keep its guzzlers loyal and global rivals at bay. Could Mallya’s airline brand extension finally be the undoing of this grand game of ‘synergy’? United Breweries, which markets the beer, made a paltry profit of Rs 126 crore in 2011-12; Kingfisher Airlines, in contrast, lost a staggering sum of Rs 2,328 crore. Earlier years’ financial comparisons are no better.

One could argue that it was the airline— operating in a bigger sector—that was meant to leverage the beer’s brand equity, and not the other way round. But the carrier was doomed from the start by “cowboy management” as one analyst scoffs. Since last October, it has been grounded. Its networth wiped out, it is staring at over Rs 7,000 crore of debt to repay. The story’s horror from a public policy point of view is how the company has been mollycoddled by Indian banks, which, after dilly-dallying on closing credit lines for years, even letting some debt be converted to now-nearly-worthless equity, are reportedly ready to repossess its assets only now, at long last.

Could Mallya yet save his carrier? To raise funds, he has agreed to sell UK-based Diageo his majority control in his hard-liquor firm United Spirits Ltd (which markets McDowell’s No 1, Bagpiper and other topselling whiskies) for about Rs 11,000 crore. A distress sale, the deal awaits regulatory approval. If it goes through, selling his ownership will get Mallya about Rs 7,700 crore; the rest goes to the coffers of USL, which will dilute its equity base by issuing new shares to Diageo. If the money can fund Kingfisher Airlines’ operations, Mallya might be able to make a case for its revival. The fact that he has not sold his beer business suggests that his brand synergy plan remains dear to him. Other airlines have slashed fares (which had gone up in Kingfisher’s absence) as a ploy perhaps to pre-empt arguments for its return. Lenders, though, ought to be sceptical. Aviation has its survival stories, but it would take a risk-shrugging saddle-giddy cowboy banker to bet on Kingfisher’s new flight plan.