Gujarat as an Object of Jealousy

Gujarat’s growth is hard to ignore. And with India’s economy in crisis, two divergent responses are surfacing 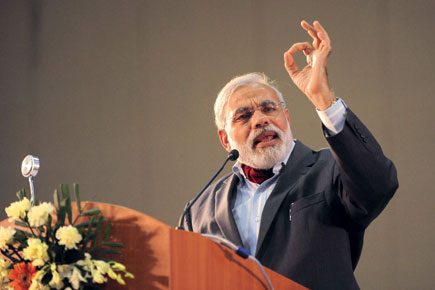 Gujarat’s growth is hard to ignore. And with India’s economy in crisis, two divergent responses are surfacing


The power of advertising is enormous, Benetton’s legendary adman Oliviero Toscani once told me—when an ad appears on TV, it makes millions of people scurry off to pee. Ads in print, he added, are potent in cerebral ways. Indeed, one in a newspaper last fortnight made me sputter into my morning tea. The potency of this particular ad, however, is better ascribed to its potential impact on how people with feelings feel about rapid economic expansion.

‘Every state wants to be Gujarat,’ the ad declares. Put out to announce some roundtable or the other in honour of India’s westernmost state, it makes glowing claims of its economic supremacy. It also features what looks like a Rorschach patch in the shape of its map, an image as arresting as any other detail; with the jugs of Gujarat jutting out in such jaunty jubilation, it’s hard not to be reminded of MF Husain’s Bharat Mata, a work of art that seems to dream of a state loved for the milk of human kindness rather than lionised for the zeitgeist of industrial concentration.

On its own, all this Gujarat jai-jaikaar would not be so jarring, but the suggestion that something about it—other than the loopy letter ‘j’ in the Gujarati script—makes it worthy of all-round jealousy poses a peculiar problem. Even if one ignores the extent of exaggeration in the claim, knowing that idle talk in drawing rooms need not be a representative sample, it achieves something a little too stark to shrug off. It portrays economic expansion as an outcome of a particular set of policies, and given Gujarat’s record of governance, it does this in a way that would leave India’s universalists profoundly put off by that quest.

Gujarat’s growth is getting hard to ignore. And with India’s economy slipping to an annual clip of 6 per cent from about 9 per cent not so long ago, two divergent responses seem to be surfacing. One, on the left, that this is just as well, since a richer India would be a nasty place for those left out of the project. Two, on the right, that this is self sabotage, since only a richer India can emerge as a powerhouse. As with that absurd ad, one can’t expect the truth to exercise much influence on such perceptions. But so long as they persist, policymakers who are convinced of economic expansion as a truly just cause will have to work harder than ever to prove their case.