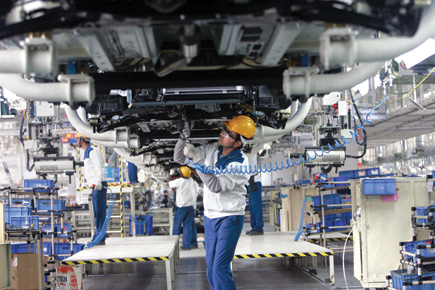 First it was the job market. After that, the Sensex. And now there is good news from the real economy as well. India’s manufacturing sector is showing signs of sustainable revival after a sharp drop during the Great Recession. India’s Index of Industrial Production (IIP), a Government gauge of the manufacturing sector, was reportedly up 15 per cent in February compared to the same month in 2009. Growth over the April 2009 to February 2010 period is pegged at a robust 10 per cent, annualised, bolstered by a spike in metals and transport equipment production, as well as a mining boom.

One policy fallout of this buoyancy is that the Reserve Bank of India (RBI) could divert attention to inflation and raise interest rates to contain it, something that the Recession kept it from doing so far. Analysts believe that underlying inflation will rise further now that production has picked up and capacities may get stretched. The RBI is under greater pressure on the interest rates front now than it has been since India introduced its fiscal stimulus package in response to the global economic crisis.

The manufacturing sector accounts for 15 per cent of India’s economy, but its importance cannot be understated.  Government policy proposes to expand this  share to 25 per cent by 2020. To that end, three initiatives are currently underway. First, new National Manufacturing and Investment Zones have been proposed, promising single-window approvals to set up industrial units. These 1,000 acre parks will also have access to cheaper finance and will have greater flexibility in dealing with labour recruitment and retrenchment. What will make these special zones even more attractive is the tax incentives being proposed. Another manufacturing booster is likely to come in the form of  dedicated freight corridors for industrial cities, like the one between Delhi and Mumbai.

Lastly, new sets of concessions are being considered for the export sector. These will also boost manufacturing, even if indirectly. India’s manufacturing trajectory, therefore, is still something to gape at.

Heavy Hitters Back in Action

After the prolonged lull of 2009, deal street is back to its busy days. The mergers & acquisitions (M&As) figures for March 2010, as well as first quarter of 2010, have shown a steep increase. This was primarily thanks to Bharti Airtel’s acquisition of Zain Africa BV. This transaction, valued at $10.7 billion, is the second largest overseas acquisition by any Indian company, next only to Tata’s Corus snap-up that was valued at over $12 billion. Also, there have been close to $2.5 billion worth of deals in March 2010, in addition to Bharti-Zain. Activity remains firm in all M&A segments, with deal volumes showing growth over both 2009 and 2008 for the month of March, according to services firm Grant & Thornton.

One million people die in India every year from smoking-related complications. According to a report, India can generate Rs 18,000 crore annually by raising its taxation on cigarettes to WHO’s recommended level of 65 per cent of the retail pack price. The current figure in India is 40 per cent. Also, if bidis are taxed at Rs 98 per 1,000 sticks, the Centre will earn Rs 3,900 crore more and prevent a potential 15 million deaths. The idea is quite simple: if you raise cigarette levies by more than 400 per cent, consumption would halve and tax revenues almost triple.