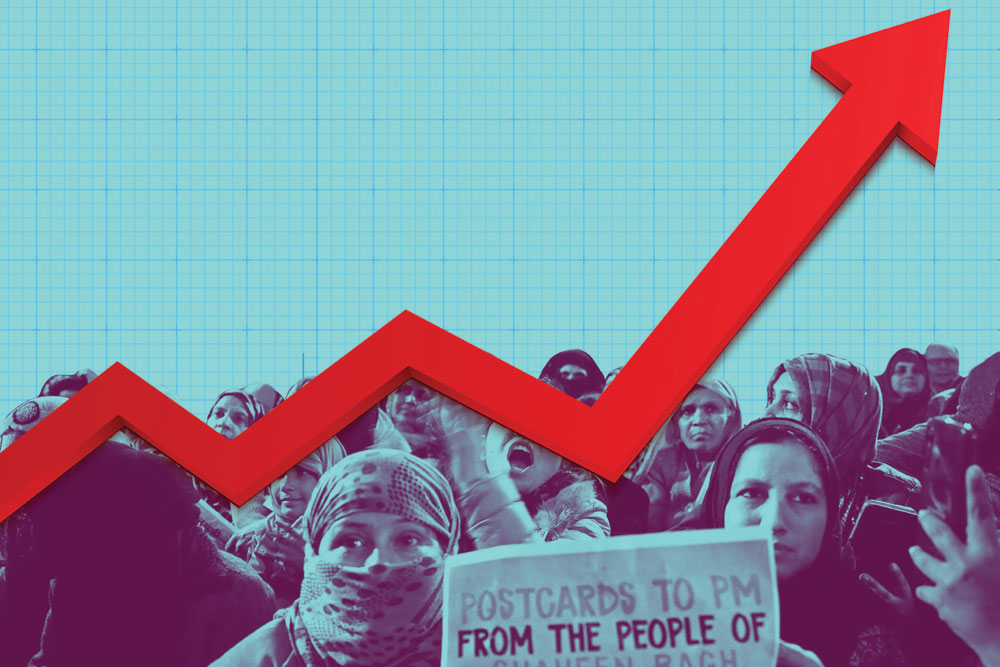 
IT DOES NOT REQUIRE much thinking to realise that India’s economy is in a difficult spot. Growth has ‘tanked’ even as usually hard-to-tackle problems like inflation have remained in check. Without higher growth, the possibility of a better future for millions of poor Indians will be on hold. The economists’ worst nightmare, it seems, is here. In the last three years, efforts to revive growth have proved harder than expected.

What is of interest, however, is the extreme pessimism of seasoned analysts who have used non-economic ideas to explain the country’s economic troubles. Plausible at the surface, these diagnoses are at odds with the reality that emerges from economic data.

The latest economist to join the chorus warning against ‘social unrest’ is Gita Gopinath, Chief Economist at the International Monetary Fund (IMF). In an interview to an Indian TV channel on the sidelines of the World Economic Forum (WEF) at Davos earlier this month, she said: “I have nothing really significant to say [about India],” but quickly added that, “It is something we will follow and we will see what this does in our next assessment in April.” Her comments came against the backdrop of the IMF’s January update of the World Economic Outlook (WEO), the Fund’s periodic assessment of the global economy’s health. The WEO clearly stated: ‘intensifying social unrest across many countries—reflecting, in some cases, the erosion of trust in established institutions and lack of representation in governance structures—could disrupt activity, complicate reform efforts and weaken sentiment, dragging growth lower than projected.’

While Gopinath hinted at India, others have been quick to draw a link between the Government’s alleged repression of protestors, the wider set of measures that include the abrogation of Article 370, the amended citizenship law and their effects on economic growth. To this mix has been added the idea of ‘fear’ on part of the business community that is also allegedly holding back economic growth.

The first shot came from Kaushik Basu, a former Chief Economic Adviser, whose oped (‘Creating spaces for different opinions is the only way to craft policies that encourage investment’, The Indian Express, November 8th, 2019) analysed the problem in terms of asymmetric information. In plain language, experts know some things better than politicians and when the latter decide to do things on their own, that creates problems: ‘It is this that makes politicians fall in the trap of designing economic policies on their own with the support of their cronies.’ His solution was to draw the best talent and restore confidence in the markets and banks—institutions in general. But this is where he added a caveat: ‘One fundamental precept of this, however, is space for dissent. If we bring in advisers who will simply endorse what the political bosses say, the government may look more orderly, but will achieve little.’

Earlier, in November, former Prime Minister Manmohan Singh made a similar set of claims in another oped (‘The Fountainhead of India’s economic malaise’, The Hindu, November 18th, 2019). He said: ‘A nation’s state of the economy is also a function and reflection of the state of its society. The functioning of any economy is the result of the combined set of exchanges and social interactions among its people and institutions. Mutual trust and self-confidence are the bedrock of such social transactions among people that foster economic growth. Our social fabric of trust and confidence is now torn and ruptured.’


Unless there is an extraordinary decline in consumption or investment, it is hard to see how the Indian economy will be in danger from protests

Singh went on to say: ‘Many industrialists tell me that they live in fear of harassment by government authorities.’ And he added: ‘Bankers are reluctant to make new loans, for fear of retribution.’ Apart from these woes, the former Prime Minister said that entrepreneurs were hesitant to put up new projects for fear of failure attributed to ulterior motives.

India has been in an economic storm for some years now. To say there is a growth slowdown is an understatement. If anything, the country is facing a severe economic contraction. For 2019-20, the forecast for the growth rate of gross domestic product (GDP) is 4.9 per cent, a reduction of nearly two percentage points over the previous year. Given the size of the Indian economy—roughly $2.9 trillion in nominal terms—shedding of two percentage points is significant.

There has been ample debate on the reasons for the contraction. By now it is received wisdom that a poorly designed Goods and Services Tax (GST) and the demonetisation of late-2016 imparted two large shocks to the Indian economy. The GST, a product of complex political bargaining between states and the Centre, not only led to compromises over the rates and slabs of taxation but also created an ‘inverted pyramid’ structure of taxation. The result: taxes on final goods are lower than those on intermediate goods. This creates an adverse ripple-down effect whereby tax collection is reduced due to a mish-mash of input credit claims and distortions in the economy. If that were not enough, demonetisation led to a massive reduction in demand from those who were dependent on cash transactions in the economy.

These problems were addressed at different times by different means by the Government. But it will be wrong to put India’s growth problems in a single bucket. The reasons for slow growth in 2017 and 2018 were very different from the ones seen in 2019. In the years 2017 and 2018, investment growth picked up smartly after a gap of five years. This was largely the result of an increase in public sector investment. Private sector economists estimate that this led to an increase in the borrowings of the public sector from 7.5 per cent of GDP in 2016 to 8.4 per cent in 2018, making the growth spurt far from costless. This growth became unsustainable—the mismatch between the savings and investment in the economy proved difficult to handle. The gap between the two led to an increase in external funding and led to the ballooning of the current account deficit from 0.6 per cent of GDP in 2016 to 2.1 per cent of GDP in 2018.

Instead of growth being sustained, this large increase in investment ultimately led to an increase in interest rates. This proved to be a brake on sustained growth.

In 2019, a different mechanism led to the phenomenal collapse in growth. After the excesses of the previous two years, the savings-investment mismatch corrected and, ideally, interest rates at the level of borrowers should have come down. That did not happen even after the Reserve Bank of India (RBI) reduced its policy rates by a whopping 135 basis points. This time, the problem lay in the collapse of non-banking financial companies (NBFCs) that are important intermediaries in the financial system. With banks averse to lend to NBFCs, the process of intermediation broke down.

Hoes does one make sense of these two very different realities: what eminent economists describe as dangers to the Indian economy and the actual downward trajectory of economic growth?

Any explanation for dwindling growth has to be described in terms of investment, consumption, government consumption and net exports—the four engines of any economy. For meaningful analysis, fear and disruption due to protests have to be described in these four categories. Otherwise they are just dinner-table talk.

Consider what Gopinath said and ask a question: What would be the scale of protests necessary to make a negative impact on the Indian economy? In one word: huge. The reason is not hard to see. Unless there is an extraordinary decline in consumption or investment, it is hard to see how the Indian economy will be in danger from protests. This is only possible if a large proportion of industrial labour and farmers quit their work. If that were to happen, these people would lose the income necessary to purchase goods produced in the economy and disrupt the working of existing investments. So far, the protests have largely been from students in different parts of the country. To give one very different example, in the case of Shaheen Bagh in Delhi, the protestors are women, a significant fraction of them homemakers whose labour is, in any case, not reflected in the growth accounting process.

The result is that the classes of protestors who can make a dent in the economy are engaged in their work and those who have no economic functions—for the moment, as they are not part of the labour force—are out on the roads.

What Gopinath hinted at is more salient for a small jurisdictional unit like Hong Kong where protests have resulted in a lockdown of large parts of the city due to violence. That has the potential to severely affect production and output. That can affect both investment and consumption. There are other possibilities too. For example, the ongoing coronavirus outbreak in China has the potential to disrupt supply chains, as parts of the country are quarantined, by disrupting traffic networks to halt the contagion.

Something similar is at work in what former Prime Minister Manmohan Singh asserted. His claim that bankers are fearful to lend money may have a superficial ring of truth. But the reality of India’s disrupted credit flows is one of failed NBFCs and broken interest rate transmission from the central bank to retailing of loans. The RBI is making money ‘cheap’ but banks are shying away from lending due to very different—risk-related—factors. It is hard to pin the blame on factors like ‘fear’.

Is there a role for expectations in this process, one that can disrupt the economy?

In a modern economy, expectations play a major role in virtually every economic variable as these are formed at the level of individual economic agents and then at the aggregate level, that of the entire economy.

There is a role for fear in forming expectations, but it does not lie at the end of protestors whose civil liberties are allegedly being curtailed. The fear lies at the end of different governments in India. Historically, governments in India have feared industrial action not just because of loss of output but also due to its expectation-forming role. The danger of runaway strikes haunted different governments in India right from Independence. The firmness with which the 1974 railway strike was put down demonstrated that. At that time, roadways as a means of transporting goods and material were relatively underdeveloped due to a poor road network. Railways were India’s economic lifeline. The danger from disruption in the flow of goods was high: in an inflationary environment, the strike could have fuelled negative expectations even further.

India finds itself in a very different environment today. The country’s ability to bear shocks to the economy is far better than earlier decades. Routine industrial action—for example, in automobile units where there has been some volatility in recent years—is now handled at the level of the concerned firms and the Government rarely intercedes. Where it is less likely to take a chance today is in cases where the unity and integrity of the country is threatened by inflammatory speeches. The danger of runaway expectations in that case is too high for the Government to sit idly and do nothing.